Arthur Szyk poster of Goebbels with the head of a skunk 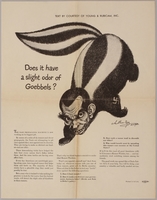 Alternate Title
Does it have a slight odor of Goebbels?
Date
publication/distribution:  1942

Legal Status
Permanent Collection
Provenance
The poster was acquired by the United States Holocaust Memorial Museum in 2015.
Funding Note
The acquisition of this artifact was made possible by the Crown Family.

Also in US Anti-Nazi propaganda collection

The collection consists of three postcards, two posters, a flier, and a pamphlet produced in America, protesting the Nazi regime in Germany.

US wartime poster asking Americans not to be influenced by Nazi propaganda encouraging them to spread hateful rumors about blacks, Jews, or Brits.

Legion of Judea postcard calling for a boycott of Nazi Germany

Postcard issued by the Legion of Judea in the United States, warning people to remember Belgium and 1914, a reference to the invasion of Belgium by Germany that launched World War I (1914-1918.) It was refrred to as the Rape of Belgium because of the brutal treatment and killing of civilians. The Legion calls for a boycott to end Nazi rule in Germany.

Legion of Judea postcard exhorting the public to crush Nazism

Potcard issued by the Legion of Judea in the United States. It calls for the defeat of Nazism and the restoration of German civilization.

Flier for a parade protesting the annexation of the Sudetenland

Flier advertising the Zero Hour Parade for Peace in New York City, October 1, 1938, sponsored by United Czechoslovakian Societies, NY City Division, American League for Peace and Democracy, United Jugoslav Federation. On September 30, 1938, France, Great Britain, and Italy signed the Munich Pact, an agreement with Hitler approving Germany's annexation of the Sudetenland, a border region of Czechoslovakia, in exchange for a promise of peace from Hitler. Czechoslovakia was not a participant in the Conference

View All 7 Items in the Collection