Laemmle family gathers on the balcony of their apartment in Stuttgart, which the family was forced to handover to the Nazis a few months after this film was recorded. Including shots of the grandmother of Kurt, Hermine, and Alyse. Alyse leans in to shake hands with Hermine, and kiss her. Kurt stands between the two of them. Kurt's parents, Siegfried and Alice talk to each other. The family, including Kurt's brother, Max, and his wife, Bobbie, and young son, Robert, stand behind Hermine, smiling at the camera. From left to right: Siegfried, Kurt, Hermine, Alyse, and Alice. Pan left and right to show their faces. Robert smiles at the camera.

In France, the Laemmles pose in front of a building with a shield-like emblem: “French Line” and “Transatlantique”. The group includes 8 people: Kurt, Alyse, Siegfried, Alice, Bobbie, Max, and a man and a woman who are unidentified. Sign: “Société Anonyme des chantier et Ateliers de Saint-Nazaire Penhoët”. Kurt and Alyse return to the US on the SS Normandie, departing from Le Havre on April 27, 1938. The ship arrives in NYC in May 1938. 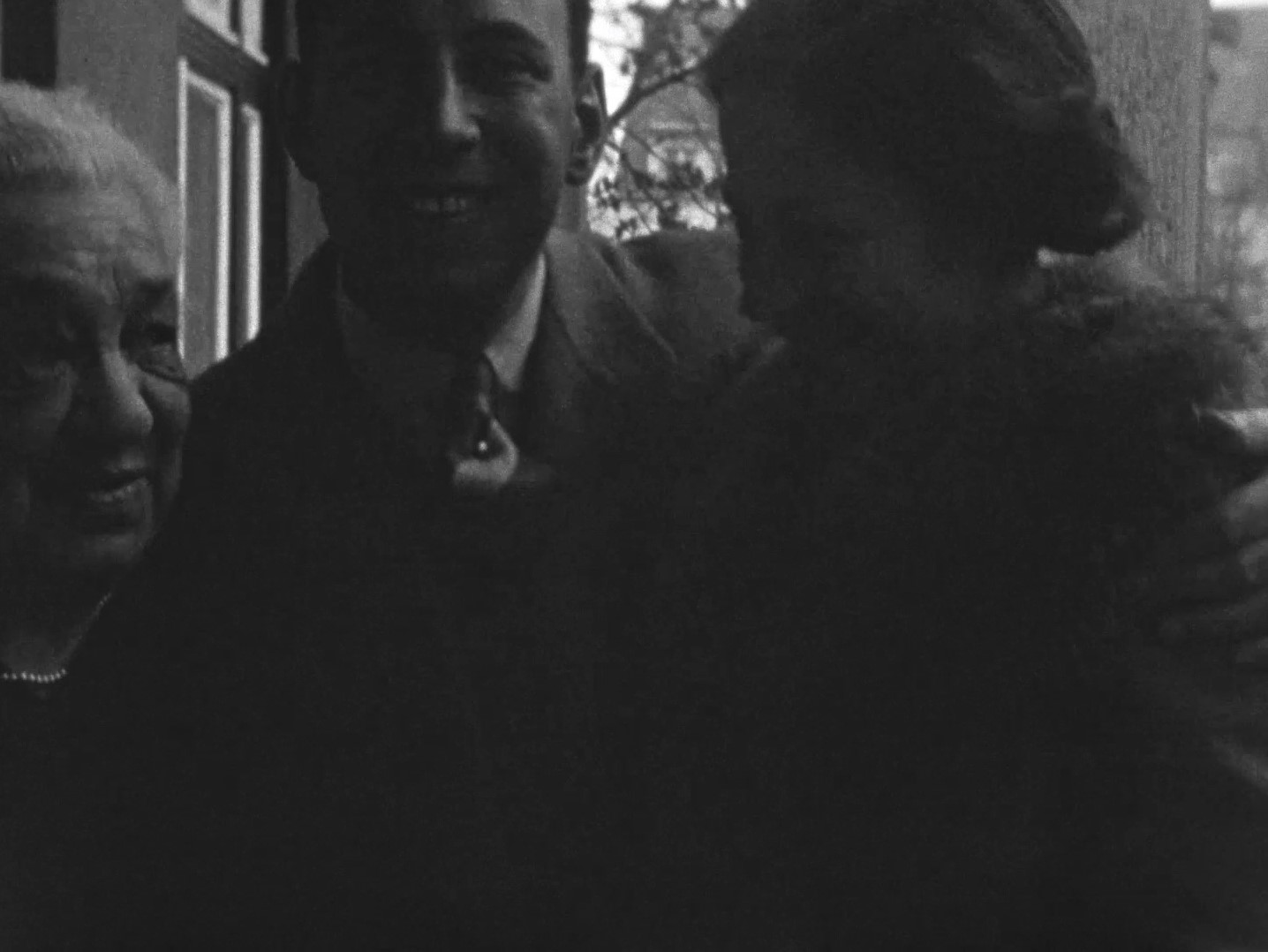 Biography
Kurt Laemmle was born in Laupheim, Germany on April 14, 1909. Kurt worked in the Ritz Theatre in Chicago. He became a naturalized US citizen on May 21, 1936 and married Alyse in October 1937. In 1938, Kurt and his older brother Max (b. May 4, 1906) founded Laemmle Theatres in Los Angeles, CA. Kurt is the nephew of legendary Universal Pictures founder Carl Laemmle.

Legal Status
In process
Film Provenance
Deborah Blum deposited digital copies of her grandfather's films to the United States Holocaust Memorial Museum in July 2019.
Note
The four original 16mm films in this collection were spliced together into one reel and scanned to 4K resolution by Periscope Films in 2017.

Following Kristallnacht, Kurt's parents, Siegfried Laemmle (born in Laupheim on July 1, 1866) and Alice Laemmle (born in Paris on January 7, 1882), escaped Germany and arrived in New York on the SS Aquitania on March 31, 1939 (from Cherbourg, France). They had obtained passage to depart on February 4, 1939 on the SS Queen Mary with Hermine but did not embark. They made it Los Angeles on April 18, 1939.
Film Source
Deborah F. Blum

Copyright
Copyright. Hollywood History Society
Conditions on Use
The Museum does not own the copyright for this material and does not have authority to authorize third party use. For permission, please contact the Hollywood History Society at https://hollywoodhistory.org/contact-us
Record last modified: 2021-02-05 11:40:29
This page: https://collections.ushmm.org/search/catalog/irn702542

In March 1938, Kurt Laemmle documented his family in Stuttgart and on vacation in St. Moritz when he visited his parents and other relatives with his new wife, Alyse.They called it a honeymoon, even though he filled out immigration papers for his parents, Siegfried and Alice. The papers enabled the family to leave Germany after Kristallnacht, after they were forced to give up their apartment and factory to the Nazis. They managed to narrowly escape being taken away by the SS. The films show Kurt and Alyse's wedding and their first baby, Jewish life in Stuttgart, a costumed holiday in the mountains, and their journey on the SS Normandie. In Los Angeles, Kurt worked at Universal for his father's cousin and the company's founder, Carl Laemmle, before going into business operating movie theaters with his brother, Max.

ECU, Life magazine cover from October 7, 1940 features Gary Cooper in the film "The Westerner"; Cooper's face has been replaced with baby Susan Laemmle, born on October 28, 1939. CU, clock on a table, the time is 7:33. Mother Alyse opens the door, smiles, and walks over to baby Susan in her crib. Alyse picks up Susan, they smile. Alyse kisses her. MCU, baby Susan in the bathtub, playing with a washcloth and a plastic doll. Alyse lifts Susan out of the tub and wraps a towel around her. Alyse brushes Susan’s hair, feeds her from a bottle, and puts her in a potty chair. She crawls around. Brief CU of Kurt holding Susan.

MS Laemmle family on vacation in St. Moritz, Switzerland. Shots include Kurt's parents, Siegfried and Alice Laemmle; Kurt and Alyse; and Kurt's brother, Max, and his wife, Bobby, and young son, Robert. They gather on a snowy mountain wearing skis. VS of the group, some don costumes, including one with a comically large moustache, a couple in wedding dress, and two people as a horse (probably during Carnival in the first week of March). VAR CUs of the family on holiday in St. Moritz. Shifts to black and white, skiing, Olympic Ice Rink.

Wedding of Kurt and Alyse Laemmle

Kurt and Alyse marry in Chicago. EXT, Chicago Sinai Congregation building. MCU a group of people get out of a car, including Alyse in a wedding gown. A woman in a white fur coat caries the gown behind her as Alyse walks up the steps of the synagogue. People follow. CU, a man in a brown hat and coat (possibly Alyse’s father?). The bride and groom (Alice and Kurt) walking out of the Emile G. Hirch Center. A woman in a red dress helps Alyse with her gown. CU Alyse and Kurt, as they move in to kiss each other. The newlyweds are joined by a short older gentleman wearing a white hat and black suit (Carl Laemmle, the founder of Universal Pictures, and Kurt's father's cousin). The wedding guests. Carl is seen talking to Kurt. Pan of wedding guests, CU of the guests, a man talks to Alyse and Kurt. INT, Alyse and Kurt, in what appears to be somebody's house for a post-wedding reception (there are a variety of pastries and sweets arranged on a table). The guests smile and talk. Older women in black lace talk to the bride. Dark CU of family members posing for the camera. Kurt and Alyse kiss. The couple laughs, and Alyse leans her head on someone's chest, which the camera (still panning) reveals to be Carl Laemmle. He starts laughing as well. Carl Laemmle and the woman he is talking to. More relatives, a man lifts his daughter to be in the frame. The guests talk.