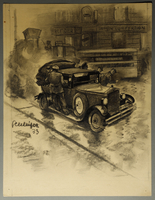 Physical Description
Image of two men hanging on to a speeding car. Two other men running away from the car in the middle of the street. Signs on the buildings read "KLEIDER" and "DAMEN KONFEKTION." Verso: top left corner, white adhesive label with "27" typewritten on it.
Dimensions
overall: Height: 13.620 inches (34.595 cm) | Width: 10.500 inches (26.67 cm)
Materials
overall : paper, charcoal, ink, graphite, crayon
Markings
Recto: left edge, 2 vertical lines from top to bottom. one is approx 1/4" from edge, the other is approx. 1/2" from edge in graphite; vertical line at right edge, doesn't go all the way from top to bottom--skips part of image approx. 1/4" from edge in graphite; bottom edge approx. 1" from edge running left to right in graphite; bottom center, in graphite, "--12,5 cm--"; Lower left corner in graphite that has been erased, "W. Sp. 5.6 (??)." Verso: center, in graphite, illegible mark that is underlined.
Signature
Signed and dated, left edge below center
Contributor
Artist: William Sharp