A Jewish teenager living in hiding in Saint Bonnet d'Orcival, France, takes part in a music/theater performance to raise money on behalf of local farmers who were prisoners of war. 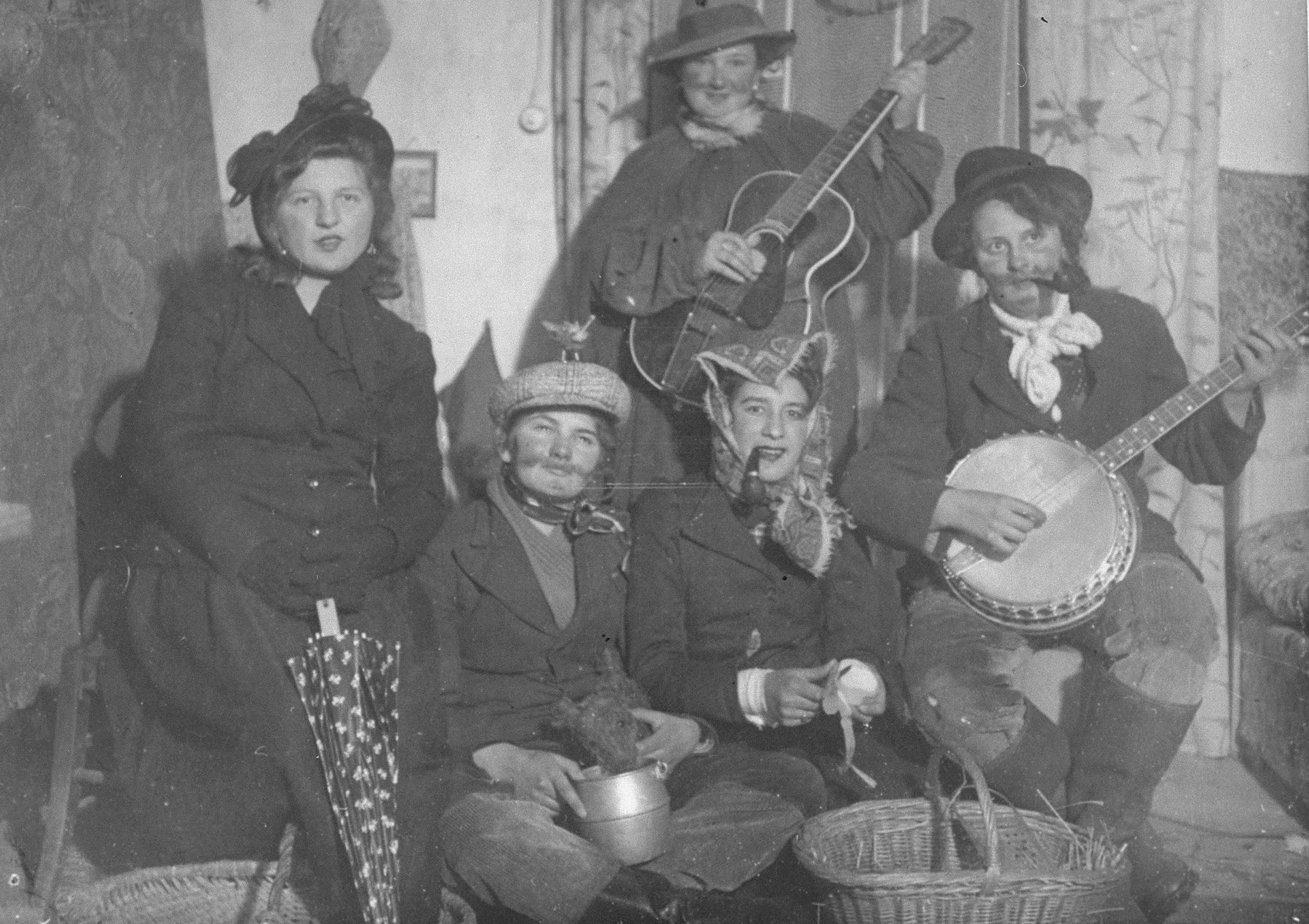 A Jewish teenager living in hiding in Saint Bonnet d'Orcival, France, takes part in a music/theater performance to raise money on behalf of local farmers who were prisoners of war.

Jacqueline Glicenstein, the Jewish teenager, is pictured standing in back with a guitar. Jacqueline, together with her friend Bernadette, staged the entire performance.

Biography
Jacqueline Glicenstein is the daughter of Paul and Cyrla (Baron) Glicenstein, a Polish Jewish couple who had moved to France in the 1920s. Settling in Epinal (Loiret), Paul and Cyrla earned a living as itinerant merchants (marchands ambulants) selling women's apparel and men's socks. Jacqueline was born April 28, 1928 in Epinal. She had one sister, Josette (b. 1938). Jacqueline was raised in a secular home and never attended synagogue. Her parents sent her to a private girls school, the College des Jeunes Filles, where she was the only Jewish student in her class. In 1939 following the outbreak of World War II, Jacqueline's father was mobilized into the French army. Her mother remained at home and tended the business. She worried about the safety of her children and decided to place Josette with a nanny named Marie Collin, who lived with her husband Auguste on the outskirts of Epinal. Jacqueline remained at home because she had to attend school. During the German invasion of France, Cyrla and the girls fled south to a small village near Vichy, but returned home after the French surrender in order to find Paul. It took several months before the family learned of his whereabouts in a POW camp in Germany. During this period Josette stayed with Marie Collin and Jacqueline visited there often. In 1941, Jacqueline was sent to a private boarding school in Dole (Jura) near the Swiss border, where she was enrolled as Jacqueline Glicen to conceal her Jewish identity. During this period her father was repatriated to France and was recuperating from his wounds at a hospital in Perpignan near the Spanish border. He contacted relatives in the U.S. to help them get papers to emigrate. His plan was that the family would meet in the town of Orange in the unoccupied zone in July 1942 and wait there until their papers arrived. Jacqueline returned home at the end of her school term expecting to depart immediately for unoccupied France. Upon her arrival she learned that her mother was in the hospital, where she was recovering from an operation, and that her father was on his way home for the first time in two and a half years to help her. During the night of July 13, a few hours after her father's arrival, their home was raided by the Gestapo, and Paul and Jacqueline were taken to the police station. Cyrla was brought in from the hospital a few hours later, and she and Paul were taken away by car, leaving Jacqueline by herself. Jacqueline's parents were sent to Drancy, and in September 1942, were deported to Auschwitz, where they both perished. After her parents were driven away Jacqueline was released into the custody of a neighbor, but a few days later was secretly picked up by Auguste Collins and taken to his home, where Josette was still living. After the Gestapo came looking for the girls at the end of August, the Collin decided to send them to friends who had a farm in the area. Subsequently, they went to live with their mother's cousins, the Rosembergs, who lived on an estate in Bollene, near Orange, in the unoccupied zone. Some months after their arrival, Jacqueline received a letter from her father that had been written on the deportation train to Auschwitz and thrown out from the railcar near Epernay. A peasant girl had found it while tending her cows and sent it on to the Collins, where it arrived barely legible several months later. In November 1942, Jacqueline resumed her education at a boarding school in Avignon. In the spring of 1943 she returned home for a weekend to discover that the Rosemberg home had been raided and the family arrested. Jacqueline feared for the safety of Josette. Totally distraught, Jacqueline went to live with her Aunt Brigitte in Saint-Pourcain near Vichy. A short time later, she was taken by a former friend of her father's to the Lassalas family who lived on a farm in the village of Saint-Bonnet-d'Orcival near Clermont-Ferrand. The family unit consisted of the widow La Meme, her son Batiste, his wife Jeanne, their child Ririe, and a half-brother simply called Lassalas. A month or two after moving in with the Lassalas' Jacqueline received a letter from a friend of the Rosemberg's maid saying that Josette was living with her in Arles. The Lassalas agreed to allow Josette to come live with them, and two days later, with new false papers in hand, Jacqueline went to fetch her. The girls remained in Saint-Bonnet until the liberation. After the war Jacqueline and Josette returned to Epinal. A year later they immigrated to the U.S., arriving in New York by plane on April 15, 1946.