Fifteen-year-old Maria Dolezalova is sworn in as a prosecution witness at the RuSHA Trial. Dolezalova was one of the children kidnapped by the Germans after they destroyed the town of Lidice, Czechoslovakia. 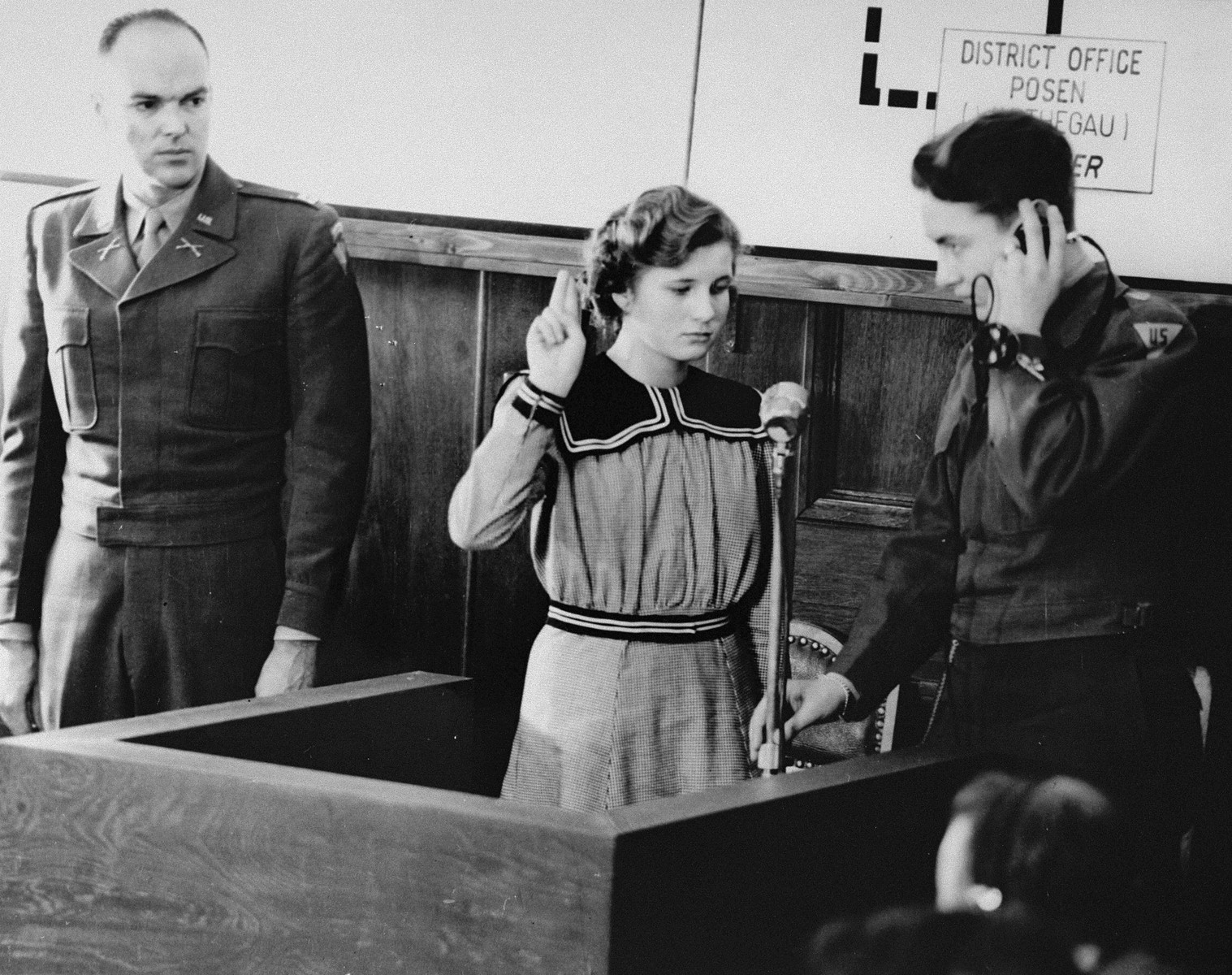 Fifteen-year-old Maria Dolezalova is sworn in as a prosecution witness at the RuSHA Trial. Dolezalova was one of the children kidnapped by the Germans after they destroyed the town of Lidice, Czechoslovakia.

Event History
On September 30, 1947, the U.S. Military Government for Germany reconstituted the Military Tribunal I, which had earlier been convened for the Doctors' Trial, to try the RuSHA Case. The 14 defendants were all leading officials in the RuSHA or Main Race and Resettlement Office, a central organization in the implementation of racial programs of the Third Reich, or in other organizations with parallel missions, such as the Lebensborn Society and the Main Office for Repatriation of Racial Germans. The indictment against them listed three counts: crimes against humanity, war crimes and membership in criminal organizations. The defendants were accused of criminal responsibility for many aspects of the Nazi racial program, including the kidnapping of "racially valuable" children for Aryanization, the forcible evacuation of foreign nationals from their homes in favor of Germans or Ethnic Germans, and the persecution and extermination of Jews throughout Germany and German-occupied Europe. The trial ran from October 20, 1947 to February 17, 1948. The tribunal rendered its judgment on March 10. It found eight defendants guilty on all counts, five guilty only of membership in a criminal organization, and one not guilty. The sentences were announced the same day. The chief defendant, Ulrich Greifelt, was sentenced to life in prison, seven to terms of between 10 and 25 years, five to time already served, and one was acquitted.
Lidice is a village in Bohemia, 16 km from Prague, that was destroyed by the Germans in retaliation for the assassination of Reinhard Heydrich, acting governor of the Protectorate of Bohemia and Moravia since September 1941. Lidice was only one of 5,000 towns and villages that were raided by the Germans following the death of Heydrich on June 4, 1942, resulting in the arrest of over 3,000 persons. Early in the morning of June 10, 1942 all the inhabitants of Lidice were forced out of their homes. All 192 men in the village were killed, as were 71 of the women. The remaining 198 women were sent to the Ravensbrueck concentration camp. 143 of these women survived the war and returned to Lidice. 98 village children were placed in "educational institutions," only 16 of whom survived. Following the removal of its population, the village of Lidice was razed in the presence of Karl Hermann Frank, secretary of state for the Protectorate and Ernst Kaltenbrunner, Heydrich's successor as governor. The official reason given for the destruction of Lidice was that its villagers had helped the assassins. In addition to Operation Lidice, which was the brainchild of Prague security police chief Josef Boehme, was a revenge operation ordered by Reichsfuehrer-SS Heinrich Himmler, in which 252 persons who were relatives or friends of Lidice residents were killed at the Mauthausen concentration camp on October 24, 1942. The victims included 130 women and a large number of youth. Lidice was rebuilt after the war and became a symbol both of the Nazi terror and the heroism of the Czech resistance.