The Maccabi boxing team stands in formation in a square in Krakow, wearing their boxing gloves. 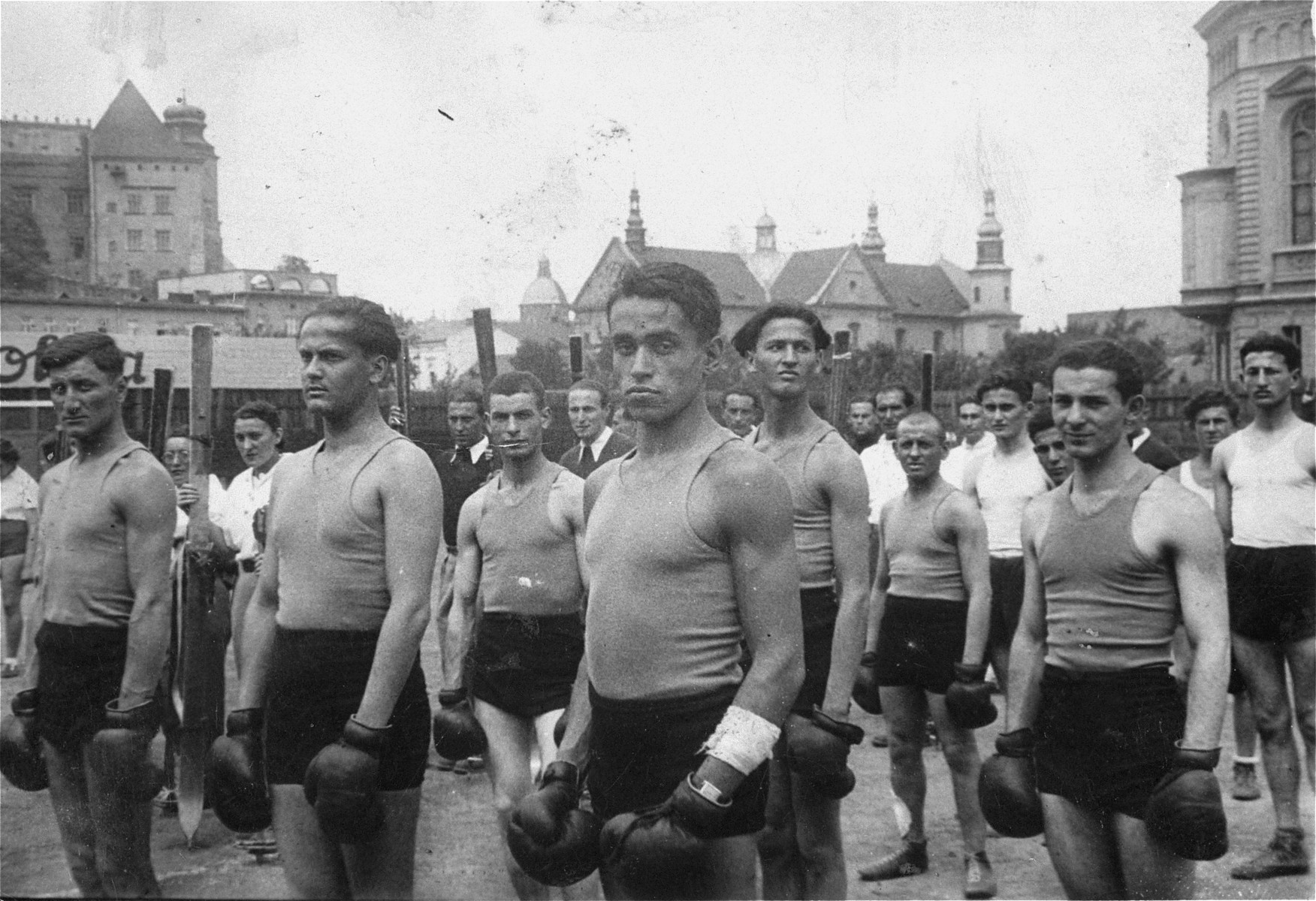 The Maccabi boxing team stands in formation in a square in Krakow, wearing their boxing gloves.

Among those pictured is Fred Eichner (second row, far right).

Biography
Fred Eichner was born December 30, 1917 in Krakow, Poland. Before the war, he worked as a barber and as an assistant at the Jewish daily newspaper, "Nowy Dzieunik." He had a strong interest in sports, particularly soccer and boxing, and had dreams of becoming a champion boxer. After much training, he was accepted as member of the prestigious Macabee-Krakow boxing team.

After the German invasion, Eichner’s ambitions were curtailed, and he went into hiding in Dobrzyce, a smaller community near Krakow. He stayed there until 1942, when the deportations of Jews began. His mother and sister were sent to Belzec. Eichner initially escaped to the forest, but as winter approached he decided to return to Krakow, where he had non-Jewish friends who were willing to help him. He stayed for a short time in the home of a Polish woman, but when the Gestapo raided their home and took her husband, he began to look for other options. Through a friend in his boxing club, he acquired false papers under the name Edward Grela, and found a job in a German barber shop. Unfortunately, he also needed a work permit. When he applied, the Polish worker noticed that papers had already been issued to another Edward Grela with the same parents’ names, and detained him for questioning. He was initially released on the orders of a German commissioner, but the Gestapo was notified and the next day they showed up at Eichner’s place of work. After checking to see if he was circumcised, they decided that he was Jewish, beat him badly, and tried to take him via tram to a prison in the Krakow ghetto. Eichner attempted to jump off the tram, but was caught and again beaten. Using his boxing training, he fought back and overpowered his captors, until one of the Gestapo men pulled a gun. A German officer who did not want the public exposed to a shooting prevented him from being killed on the spot, but when they arrived at the Krakow prison the beating resumed. Eichner pretended to be dead, and was left. Other prisoners attended to his injuries, but told him that he would soon be transported to his death at Plaszow.

The next day he went out to the prison yard and through the bars he saw his friend, Max Hilfstein, who had been working in the barbershop established in the ghetto for Germans and other ghetto workers. Eichner related the story of his capture and the fight that had ensued, and Max promised to help him in any way he could. Max then proceeded to his barber appointment with SS Hauptsturmfuhrer Wilhelm Kunde. Noticing that Kunde was in a good mood, Max asked what he might do with a Jew who, after his arrest, had actually fought back and beaten up the Germans who arrested him. Kunde, laughing, protested that this was not possible, but if it should happen that prisoner should not be executed, but set free. Max replied that this very thing had just happened, that the man was his friend and a fine athlete, now being held in the ghetto jail. After leaving the appointment, Kunde inquired with the chief of the Jewish Police, Simcha Spira, who took him to Eichner’s cell. Eichner again related his story, and was told by Kunde that he liked people who defended themselves, and that he would see that he was protected.

The next month, Eichner was sent on a transport to Plaszow with forty other prisoners, including women and children, who were to be executed. Upon arrival, they were taken by camp commandant Amon Goeth to “Hojowa Gorka,” the hill were executions took place. There, the transport commander, a Ukrainian named Janiec, indicated to Goeth that Eichner was a barber of Kunde, and that Kunde had said he should not be executed. In response, Goeth freed the entire group, making them the only such group known to have escaped execution.

Eichner was subsequently deported to Auschwitz, where he stayed for one year and served as the barber in Block I. In 1944, he was put on a death march to Gross Rosen, and from there, evacuated first to Dachau and then to Muehldorf. In 1945, Eichner was on a transport train from Muehldorf to another site to be shot. The train entered an area contested by American troops. The Americans fired on the train, killing many of the prisoners in Eichner’s wagon. Eichner survived by hiding behind a can of water. It blocked a bullet that would have hit him. The next day, some of the survivors put their striped coats on the roof to signal to the Americans that they were prisoners. The Americans stopped firing on Eichner’s wagon. The SS guards, wearing civilian clothes under their uniforms, told the prisoners the war was over and let them off the train. The prisoners ran into the woods, where a little German boy with a pistol herded them back to the train. Another group of SS troops, hearing what the first group of SS troops had done, began shooting many of the remaining prisoners.

After the war, Eichner lived in Munich until his immigration to the US in 1950. His mother and his sister, Rosalia, perished in Belzec after having been incarcerated for a time in the Wieliczka camp. His father died before the war.