Students of the Jewish school on the Jan van Eyckstraat in Amsterdam. Most of the children are wearing the Jewish badge. Pictured second from the right in the second row is Yoka Verdoner, who survived the war in hiding. 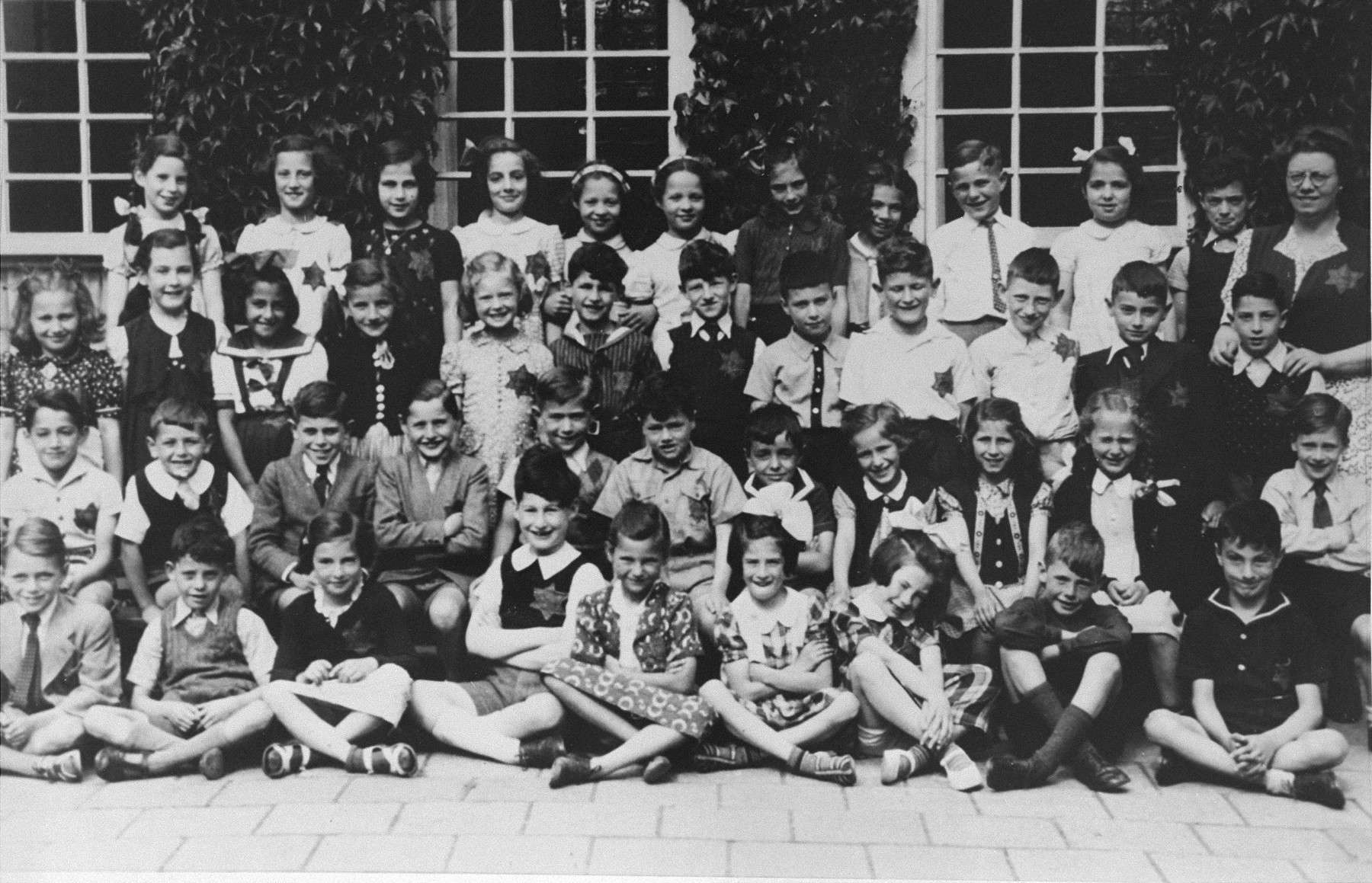 Students of the Jewish school on the Jan van Eyckstraat in Amsterdam. Most of the children are wearing the Jewish badge. Pictured second from the right in the second row is Yoka Verdoner, who survived the war in hiding.

Biography
Francisca Kan (born Francisca Verdoner) is the daughter of Gerrit and Hilde Verdoner-Sluizer, who were married on December 12, 1933. Francisca was born in 1937 and grew up in an upper-middle class household in Hilversum. Francisca has an older sister Yoka (b. 1934) and a younger brother Otto, born in February 24, 1939. In 1942 with the start of deportations to the east, the Verdoners decided to find hiding places for their three children. Francisca was brought to Zandvoort to the home of Jan and Fen Barens who were active in Dutch underground. Later that year, the Germans decided to reinforce the Zandvoort coast and evacuated civilians. The Barens moved to Amsterdam along with Francisca in early December 1942. Since no one knew them from before, they now instructed Francisca to call them Mama and Papa, and she assumed identity of their daughter, Fransje Barens. However, as she had no papers, she could not attend school. They found housing in the former Jewish neighborhood on Plantage Middenlaan, two doors away from the Schouwburg theater. Since June 1942 the building had ceased to function as a theater and now was used as a detainment center for Jewish deportees. Francisca frequenly woke to hear the screams of Jews being brought there in the middle of the night. Though the Barens saved Francisca's life at their own personal risk, her time with them was not happy as she frequently was subjected to physical punishment for various infractions. Her siblings and father were hidden elsewhere. The Canadians liberated Amsterdam in May 1945. The following month her father came to get her and bring her back to Hilversum to reunite with her brother and sister. Her mother, Hilde, was arrested and sent to Westerbork on December 18, 1942. She worked as a secretary in the Council office. Gerrit also was employed by the Westerbork Jewish Council as a buyer of supplies for the camp. This exempted him from deportation and allowed him to travel unimpeded and purchase various small commodities for Hilde. Therefore their daily life was much better than that of most Westerbork inmates. In September 1943, Hilde was released from the camp and allowed to return to Amsterdam. However, after ten days of relative freedom she was re-arrested and sent back to the camp on September 29, 1943. Gerrit was away that day and avoided the round-up. He later went into hiding on a farm in Friesland. When Hilde returned to the camp she no longer enjoyed a protected position. Gerrit corresponded with her and in coded messages urged her to try to escape. Hilde, fearing repercussions for her parents and in-laws, refused to flee as long as they remained in the camp. In December 1943, she fell ill with hepatitis. She wrote her last letter to Gerrit from her hospital bed on January 31, 1944. One week later, on February 8, 1944 she was deported to Auschwitz where she was gassed upon arrival on February 11 at the age of 34. Gerrit's parents, Henriette and Abraham Verdoner, perished in Auschwitz. Hilde's parents survived in Theresienstadt.