Nettie Stub poses next to a chalkboard on the first day of school. 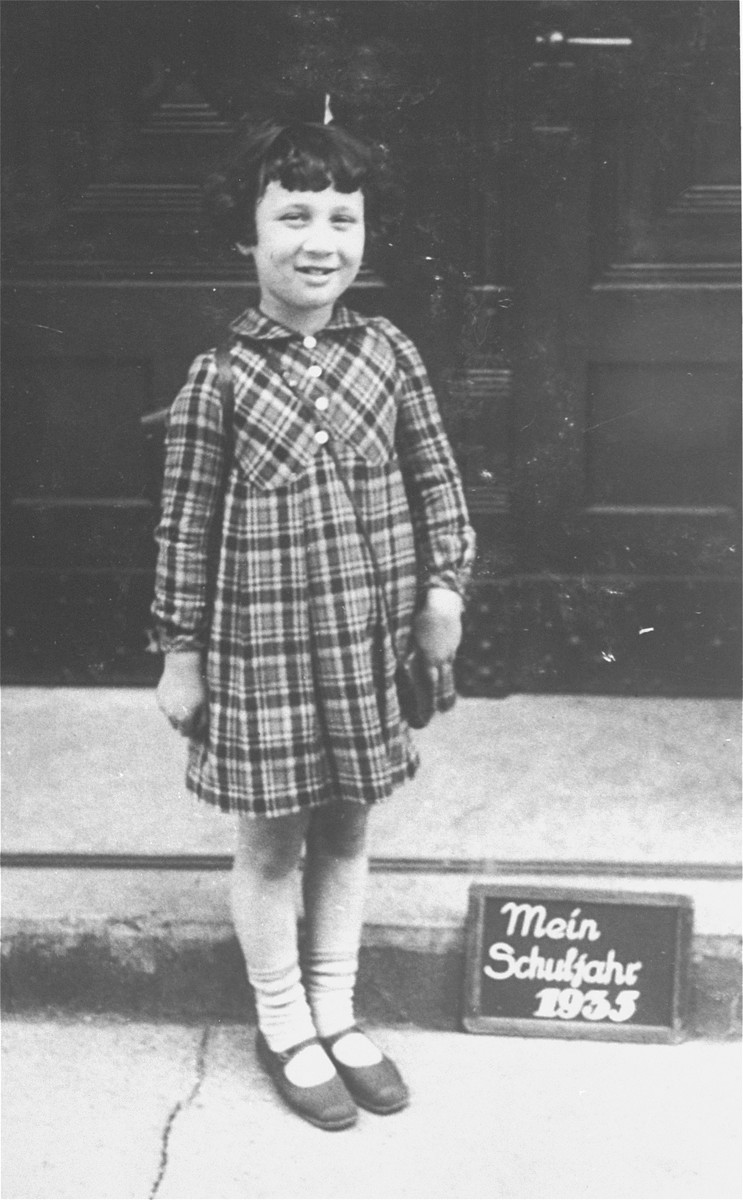 Nettie Stub poses next to a chalkboard on the first day of school.

Biography
Nettie Katz (born Nettie Stub) was the daughter of Hermann (b. 1885) and Minna (nee Wirths, b. 1896). She was born into an Orthodox Jewish family in Hannover, Germany June 3, 1927. Her father was a local salesman who also traveled to Poland around holidays to serve as cantor for communities that were in need of one. Her mother stayed home caring for Nettie and her three siblings; older brothers Leo and Moritz (b. 1923) and younger sister Regina (b. 1929). The family kept kosher and spoke Yiddish in the home. Nettie attended a Jewish day school with her siblings. As a young child she was bullied by non-Jewish children who threw rocks and forced her to walk in the street. She was also aware of the signs that barred Jews from Aryan businesses around Hannover, and she also remembers a photo of her appearing in Der Stuermer c. 1936, showing her as a typical Polish Jew. On October 27, 1938, German police began expelling Jews of Polish nationality throughout Germany. The Stub's were forcibly removed from their home during the night and had to leave behind all of their possessions. Nettie had to report to the assembly point in her pajamas. The family had Polish passports, but her older brother Leo, too old to be on the family passport, was separated from them. The family was then deported to Poland and ended up in the Zbaszyn refugee camp. While there, her days were idle. She and her siblings did not attend school and some days wandered aimlessly or waited in line for food. One day a man with a camera showed up and many people surrounded him trying to figure out who he was and what he was doing. The photographer, Roman Vishniac, took a photograph of her in her bunk and told her he would help get her out of the camp. In 1939, after several months in the refugee camp, her mother told her that she was going on a short vacation to Sweden and she would see her soon. A Red Cross official placed a placard with an address around her neck and escorted her and other children out of the refugee camp. Once in Sweden, a member of the foster family that would house her met her at the port when she arrived. Nettie received mail from her parents until 1942 from various locations while they were in Poland. They never wrote about their ordeals or suffering, but she never again saw her parents or siblings, Moritz or Regina. Throughout the war she stayed with multiple foster families in and around Stockholm and ended up in an orphanage in 1943. After the war, she graduated from a baby nurse course and while working, she received a postcard from her brother Leo that he was coming to see her. Leo located her in Sweden through the Red Cross after surviving Buchenwald. She didn't recognize him when they first met, but he recognized her. Together, they immigrated to the United States in 1945 and were sponsored by family members through HAIS. She met and married a fellow survivor Siegfried Katz in New York.