Portrait of the Bocahut family at a wedding celebration (sitting to the groom's right). 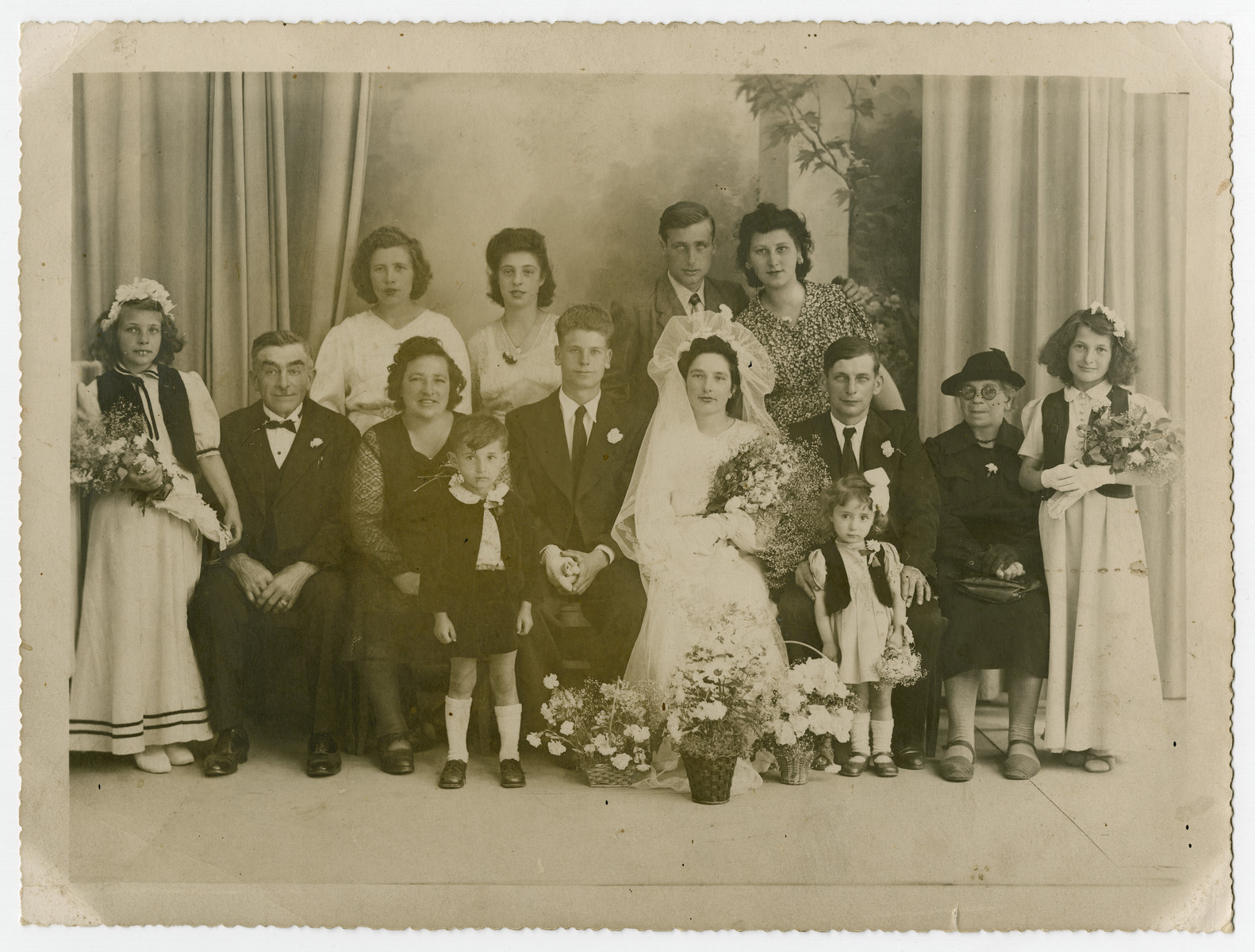 Portrait of the Bocahut family at a wedding celebration (sitting to the groom's right).

Jacques Karpik, who at the time was a child in hiding with this family, appears at the bottom left in front of Suzanne Bocahut. The little girl is his sister Annette. Directly behind her is Marcel Bocahut.

Biography
The Karpik family left Poland and settled in France. In the early 1940s, Jacques Karpik Fein, went into hiding with the Bocahut family in Versgallant, north of Paris. His father was deported to Pithiviers in 1941. The donor and his sister later emigrated to the United States and were adopted.
Jacques Fein (born Jacques Karpik) is the son of Szmul Karpik (b. 12/15/16 in Sokolow) and Rojza nee Taszynowicz (b. 8/10/1913 in Wolomin). Szmul and Rojza both immigrated to France from Poland in the 1930s. Jacques was born on October 10, 1938 in Paris where his father worked as a tailor. His sister, Annette, was born on August 30, 1940. After the start of WWII, Jacques and his sister were placed in hiding near Paris with the help of the French organization, Ouevres de Secours aux Enfants (OSE). The OSE placed them with Marcel and Suzanne Bocahut, a Catholic family in Vers-Galant (about 20 miles north of Paris). The children lived openly as Catholics; Jacques was even baptized. During their first year in hiding, Rozja managed to visit her children secretly. Szmul was deported to the French internment camp, Pithiviers. From there he was sent to Drancy and deported to Auschwitz on June 25, 1942, where he perished. Rozja was arrested while on the Paris Metro. She then was deported to Drancy and murdered at Auschwitz in 1943. Many other family members residing in France were also deported to Auschwitz. Jacques and Annette remained with the Bocahuts until 1946. Then the OSE, placed them in children's homes; first Les Roches in Normandy and then in Taverny, outside of Paris. In 1948 Jacques and his sister left France for the United States where they were adopted by an American family, Harry and Rose Fein, now deceased. Their relocation and adoption in America was coordinated by OSE's board in the United States. In the United States, Jacques completed his schooling, and had a career in the computer software industry. He has two children, Rachel and Matthew, from his first marriage, and a step-daughter, Laura, from his marriage in 1986 to Judee Iliff. Jacques and Judee now have three grandchildren - Samuel, Zachary and Adrienne - and live in Elkridge, Maryland. Samuel was named after his birth father. Adrienne was adopted and in later years they will share a common experience. Jacques is an active volunteer in the Jewish community and in organizations dedicated to teaching about the Holocaust, including the United States Holocaust Memorial Museum. His sister Annette later immigrated to Israel and became an artist