Reichsfuehrer-SS Heinrich Himmler looks on as Reinhard Heydrich's casket is carried out from the Reich chancellery for burial. 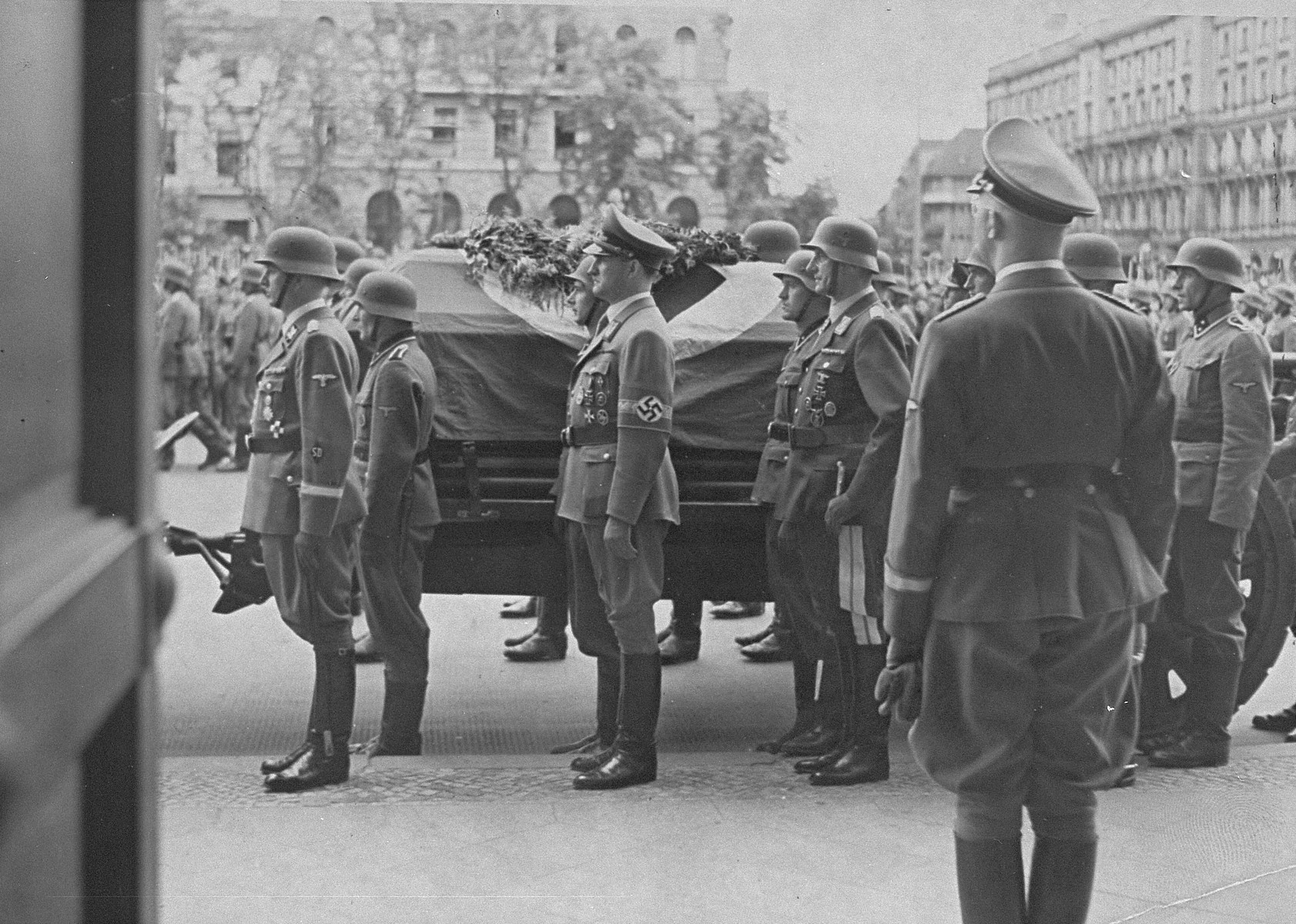 Reichsfuehrer-SS Heinrich Himmler looks on as Reinhard Heydrich's casket is carried out from the Reich chancellery for burial.

Event History
The assassination of Reinhard Heydrich took place on May 27, 1942, in Holesovice, an outlying district of Prague. His assassins, Jan Kubis and Josef Gabcik, had been NCOs in the Czech Army before the Nazi occupation in March 1939. Shortly thereafter, Kubis joined a Czech resistance organization and was captured but later released by Nazi authorities. Following his release, Kubis fled to Poland and ended up in a refugee camp where he met Josef Gabcik who had also fled from the Nazi occupation. The two joined the French Foreign Legion and were sent to England after the fall of France. There the men joined the Czech Legion and along with 160 other Czech refugees volunteered to work as Allied operatives in occupied Czechoslovakia. After receiving training, several teams of Czech operatives, among them Kubis and Gabcik, parachuted into the protectorate at the end of December 1941. Once in occupied territory most of the men were either captured and killed by Nazi authorities or deserted. Kubis and Gabcik, however, came into contact with the Czech resistance movement and began preparations for the assassination. On May 27, 1942 the two ambushed Heydrich and his chauffeur shortly after their departure from Heydrich’s home on the outskirts of Prague. After narrowly escaping, Kubis and Gabcik split up but were eventually reunited by the Czech resistance movement. Along with five other operatives they went into hiding in the Carlo Boromeo Church in Prague. On June 18, however, Nazi authorities became aware of their whereabouts and surrounded the church. They first attempted to flush the men out with tear gas, but then proceeded to flood the church’s crypt where they had been staying. All seven of the resisters were either killed in the fighting or committed suicide. Their bodies were removed from the crypt and placed on display in front of the church.

https://www.ushmm.org/wlc/en/article.php?ModuleId=10007406.
Biography
Heinrich Himmler (1900-1945), Reichsfuehrer-SS, head of the Gestapo and the Waffen-SS, and Minister of the Interior of Nazi Germany from 1943 to 1945. Himmler, born in Munich, was the son of a pious Catholic schoolteacher. After graduating high school he joined the army in 1917, where he served as an officer cadet in the Eleventh Bavarian Regiment. After World War I Himmler studied agriculture at the Munich School of Technology from 1918 to 1922. He then worked briefly as a fertilizer salesman and a chicken farmer. In the early 1920s he became involved with the fledgling Nazi party and participated in the Munich Beer-Hall putsch of November 1923, serving as standard-bearer at the side of Ernst Roehm. Between 1926 and 1930 Himmler was the acting propaganda leader of the NSDAP. After marrying Margarete (Marga) Boden in 1928, he returned briefly to poultry farming, but was economically unsuccessful. Just over a year after his marriage, his daughter Gudrun was born. Unable to bear him any more children, Margarete adopted a boy, but Himmler showed him little interest, preferring to lavish his daughter with expensive gifts. As his marriage began to deteriorate, Himmler's visits to the family home in Gmund am Tegernsee became so few that Gudrun was often flown to Berlin so her father could spend a few hours with her. Meanwhile, Himmler became romantically involved with his secretary, Hedwig Potthast, who bore him a much-wanted son, Helge. In 1929 Himmler was appointed head of the SS, Hitler's personal guard, and the following year, was elected to the Reichstag as the Nazi deputy from Weser-Ems. Immediately after the Nazi takeover of power in 1933, Himmler became police president in Munich and head of the political police in Bavaria. This gave him the power base to expand the SS and secure its independence from Roehm's SA (Storm Troopers), as well as to organize the SD (Security Service) under Reinhard Heydrich. In September 1933 Himmler was made commander of all political police units outside Prussia, and in April 1934, head of the Prussian police and Gestapo. By June 1936 Himmler had won control of the political and criminal police throughout the Third Reich by virtue of his positions as Reichsfuehrer-SS and head of the Gestapo. In his pursuit of ever more effective means to put down political opposition, he set up the first concentration camp at Dachau in 1933. Himmler was inspired by a combination of fanatic racism and philosophical mysticism. His obsession with racial purity led to the institution of special marriage laws that encouraged the procreation of children by perfect Aryan couples, as well as the establishment of the Lebensborn (Fountain of Life) centers at which girls, selected for their Nordic features, coupled with SS men. In furtherance of his racial goals, Himmler also recruited Aryans of different nationalities into the Waffen-SS. He envisioned the creation of a pan-European order of knighthood owing allegiance to the Fuehrer alone. The outbreak of World War II allowed Himmler to pursue the other side of his program, namely the elimination of Jews and other so-called "sub-humans." In October 1939 he was appointed Reich Commissioner for the Strengthening of German Nationhood and given full control over the annexed section of Poland. He immediately set out to displace the Polish and Jewish population of this area with ethnic Germans from the Baltics. By the time of the German invasion of the Soviet Union in June 1941, Himmler controlled all the organs of police and intelligence, the political administration in the occupied territories, and (through the SS) the concentration camp system in Poland. When he was made Minister of the Interior in 1943, he gained jurisdiction over the courts and the civil service as well. Himmler ruthlessly utilized these powers to exploit Jews, Slavs, Roma, and others for slave labor, to shoot and gas millions of Jews, and to subject thousands to forced abortions, sterilization and pseudo medical experimentation. After the failed attempt on Hitler's life in July 1944, Himmler's position was further enhanced when he was appointed chief of the Reserve Army and commander of Army Group Vistula. Near the end of the war, however, Himmler became convinced of Germany's imminent defeat and made several overtures to the Allies. He sanctioned the "Blood for Trucks" negotiations in Budapest, ordered the halt to the mass slaughter of Jews, tried to initiate peace negotiations with the Allies through Count Folke Bernadotte, permitted the transfer of several hundred camp prisoners to Sweden, and proposed the surrender of the German armies in the West while continuing the battle in the East. Hitler was enraged by this betrayal and stripped Himmler of all his offices. Following the German surrender, Himmler tried to escape by assuming a false identity, but was arrested by British troops. Transferred to Lueneberg, Himmler committed suicide by poison capsule on May 23, 1945 before he could be brought to trial.