Prosecution witness Dr. Leo Alexander explains the nature of some of the experiments performed on prisoners during his testimony at the Doctors Trial. 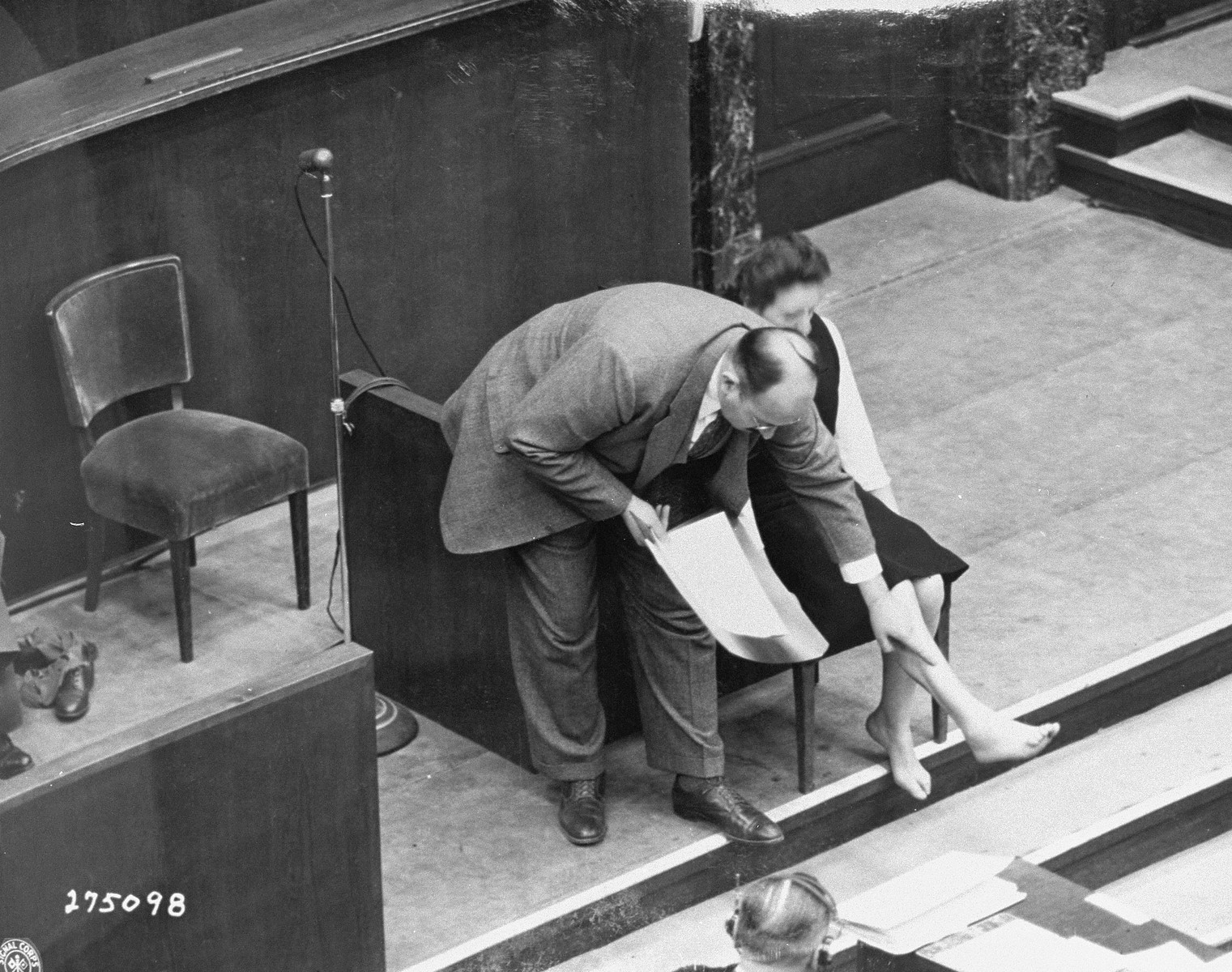 Prosecution witness Dr. Leo Alexander explains the nature of some of the experiments performed on prisoners during his testimony at the Doctors Trial.

The former prisoner with him is a Polish woman, Maria Broel Plater (Skassa), brought in as a witness.

https://encyclopedia.ushmm.org/content/en/article/the-doctors-trial-the-medical-case-of-the-subsequent-nuremberg-proceedings.
Biography
Maria Skassa (born Maria Broel Plater) is the daughter of Antoni and Helena Plater. A Polish Catholic, she was born in Warsaw on December 18, 1913 and studied at the Warsaw Polytechnic Institute. When the war broke out, she joined the youth resistance organization ZWZ (associated with the Home Army) and became a leader of the group distributing illegal press and publications. She and her brother were arrested on June 12, 1914 in Terespol. He died in the Auschwitz concentration camp in March 1942. Maria was sent to prison in Biala Podlaska and on July 28, 1941 to the Lublin Castle prison. The Gestapo tortured and beat her and initially sentenced her to death. On September 23, 1941 they sent her to the Ravensbrueck concentration camp. There she was forced to perform hard physical work at the construction site, carrying heavy loads of bricks, sand, and soil. Later she was forced to make straw inserts to soldiers' shoes and sew together pieces of fur for Germans. In the concentration camp she joined the illegal Girl Scout organization "Mury" (The Walls). Nazi physicians subjected her to pseudo-medical experiments with sulfanilamide drugs. They infected her leg with tetanus bacteria and then made an incision in the leg. Maria's leg became swollen and extremely painful, and she developed a very high fever. She was extremely sick until the end of 1942 and continued to suffer chronic leg pain for decades later. When the Germans tried to execute the "Lapins" (guinea pigs), Maria changed her number to that of a deceased person so she was able to hide and survive. Maria was evacuated from the concentration camp on April 28, 1945 and returned to Warsaw to live with her mother. They continued to suffer from deprivation until Maria found a job with the Polish Red Cross. In 1953 she married Stanislaw Skassa.