Dr. Hans Wagner, a former researcher for I.G. Farben industries, is sworn in as a witness for the prosecution during the I.G. Farben trial. A diagram of the organizational structure of I.G. Farben is behind him. 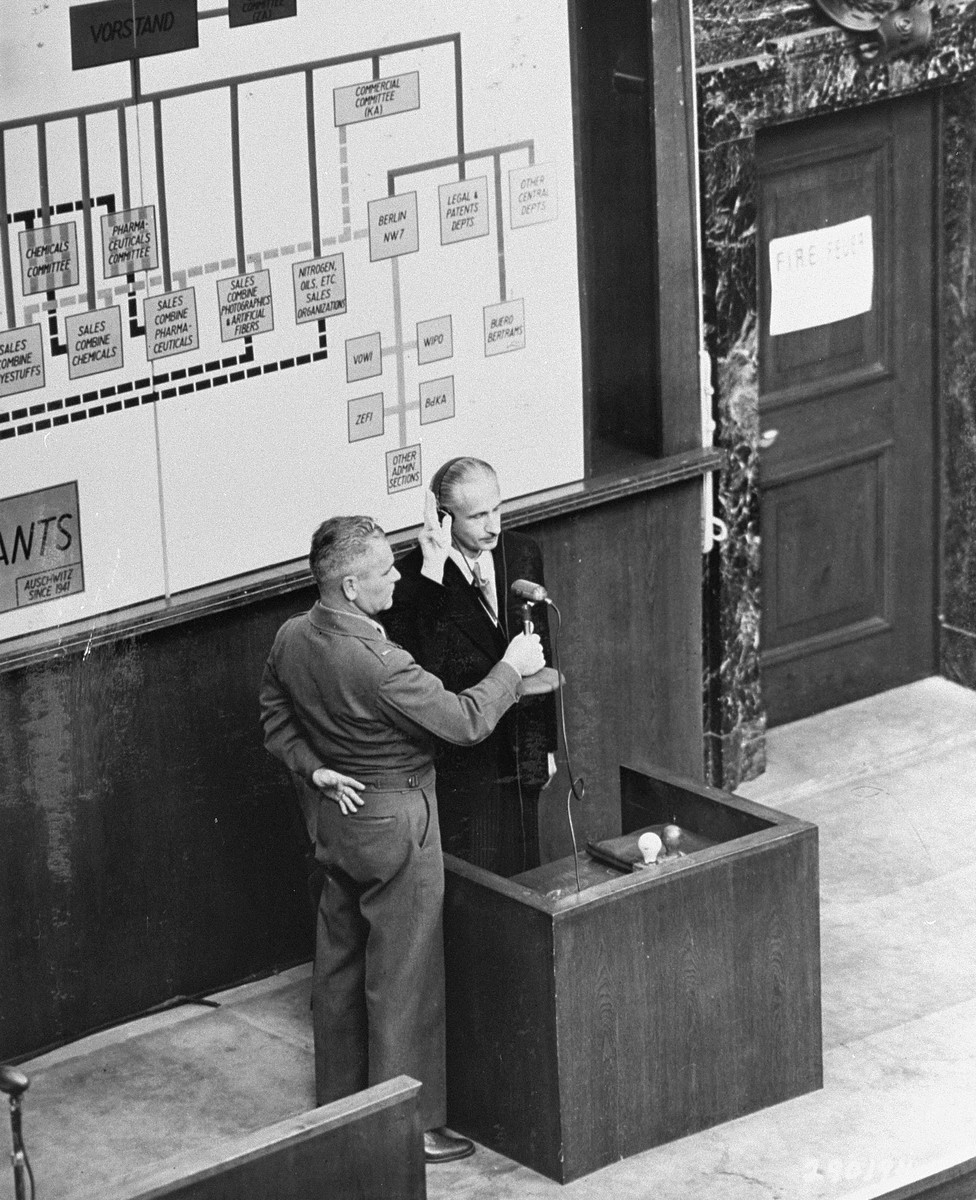 Dr. Hans Wagner, a former researcher for I.G. Farben industries, is sworn in as a witness for the prosecution during the I.G. Farben trial. A diagram of the organizational structure of I.G. Farben is behind him.

Event History
The I.G. Farben Trial, the sixth subsequent Nuremberg proceeding, was tried by the Military Tribunal VI, which had been created by the US Military Government for Germany on August 8, 1947. An indictment filed on May 3 named twenty-four defendants, all in the IG Farben industrial concern, and listed five counts: the planning, preparation, initiation, and waging of wars of aggression and invasions of other countries; committing war crimes and crimes against humanity through the plunder and spoliation of public and private property in countries and territories that came under German occupation; committing war crimes and crimes against humanity through participating in the enslavement and deportation for slave labor of civilians from German-occupied territories and of German nationals; participation by defendants Christian Schneider, Heinrich Buetefisch, and Erich von der Heyde in the SS, a recently-declared criminal organization; and participation in a common plan or conspiracy to commit crimes against peace. The trial began with the twenty-four defendants but ended with only twenty-three, after the case against Max Brueggemann was discontinued on September 9, 1947 due to illness. The trial ran from August 27, 1947 to June 11, 1948, making it the third longest Nuremberg proceeding after the main IMT trial and the Ministries Case (the eleventh subsequent trial). The Tribunal returned its judgment on July 29th and 30th, acquitting all of the defendants on counts one and five, and the three defendants charged in count four. Nine of the defendants were found guilty of the charges in counts two, and five and were found guilty of the charges in count three. Altogether, ten of the defendants were acquitted completely. The thirteen defendants found guilty were sentenced on July 30th, receiving prison terms ranging from one and one half years to eight years in prison, including time already served.
https://www.ushmm.org/wlc/en/article.php?ModuleId=10007077.