An American military soldier serves Wilhelm List with his indictment at the beginning of the Hostage Case. 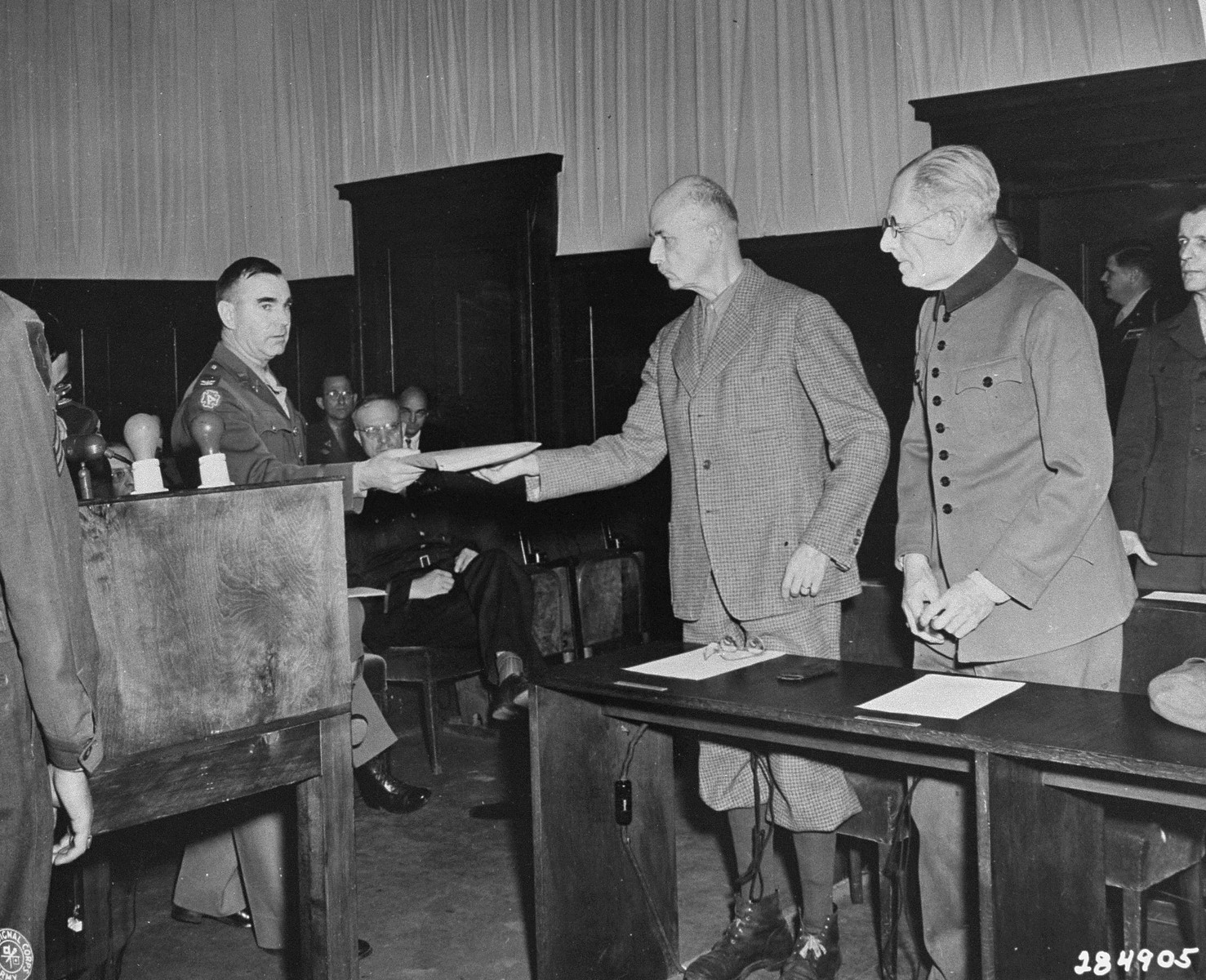 An American military soldier serves Wilhelm List with his indictment at the beginning of the Hostage Case.

Event History
The U.S. Military Government for Germany created the Military Tribunal V on June 28, 1947 to try the Hostage Case, whose twelve defendants had been indicted on May 10. The trial got its name from the issue it dealt with. The four counts charged the defendants with committing war crimes and crimes against humanity through: participation in the murder of hundreds of thousands of civilians of Greece, Yugoslavia, and Albania by troops of the German Armed Forces; participation in the plundering and looting of public and private property, the destruction of cities, towns, and villages, and other acts of devastation in Norway, Greece, Yugoslavia, and Albania by troops of the German Armed Forces; participation in the initiation and drafting of secret orders denying enemy troops quarter and denying them the rights of POWs, and orders commanding that surrendered troops of countries at war with Germany be executed; participation in the murder, torture, imprisonment in concentration camps, use for forced labor, and deportation for slave labor of civilians of Greece, Yugoslavia, and Albania by the German Armed Forces. After the arraignment on July 8, 1947, the trial opened on July 15, 1947. It closed on February 9, 1948 with only ten defendants, as Franz Boehme had committed suicide between the indictment and the arraignment, and the case of Maximilian von Weichs was discontinued because his physical disability prevented him from standing trial. On February 19 the Tribunal returned its judgment, finding eight of the defendants guilty of at least one count, and acquitting the other two. It returned its sentences the same day, sending two of the guilty defendants to prison for life, and the other six to prison terms ranging from seven to twenty years.

https://www.ushmm.org/wlc/en/article.php?ModuleId=10007070.
Biography
Wilhelm List (1880-1971) served as a General Field Marshall during the Second World War. List was born in Oberkirchberg on May 14, 1880 into a doctor's family. Serving in World War I and the Freikorps, List held commands in the Reichswehr from 1923-1926. List climbed the ladder in the Reichswehr, becoming a Lieutenant General in 1932 and gaining command of the Fourth Army three years later. A Generaloberst by 1939, List lead the Fourteenth Army in the invasion of Poland and commanded the Twelve Army's assault on France in 1940. Awarded with a promotion to General Field Marshal in July of 1940, List was instrumental in arranging an agreement with the Bulgarians allowing the Wehrmacht to enter Greece via Bulgaria. Commander-in-Chief of German armies in the Balkans from June through October of 1941, List's fortune changed dramatically as his armies moved into the Soviet Union. Hitler dismissed List on September 10, 1942 claiming that his Field Marshall failed to break the Russian line in the Caucasus. The American military tribunal at Nuremberg tried and sentenced List to life imprisonment in 1948. He was pardoned in 1953 and died on June 18, 1971 in Garmisch.