Group photograph taken at the school at an orphanage for Jewish children in Verneuil. 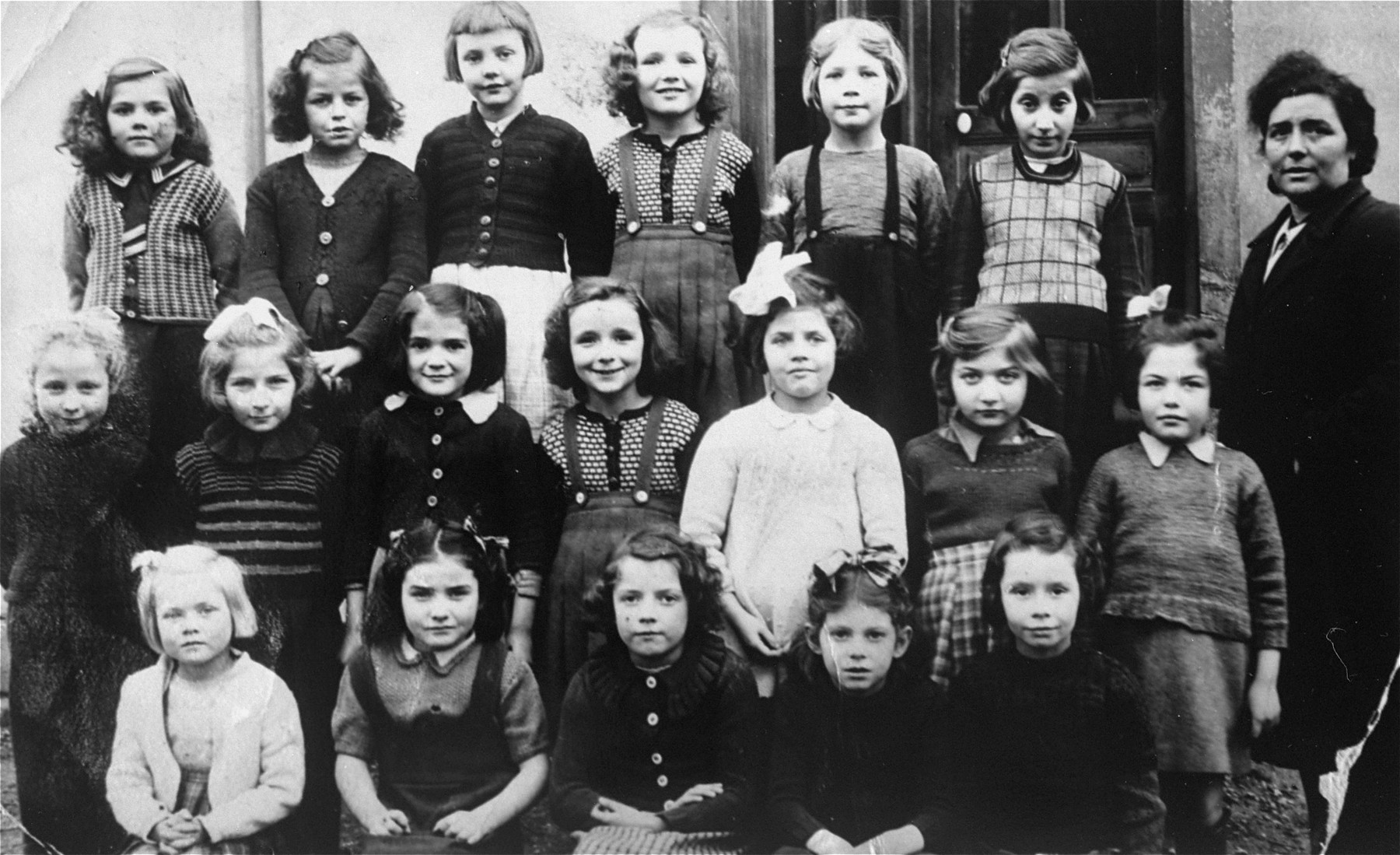 Group photograph taken at the school at an orphanage for Jewish children in Verneuil.

Among these children is Evi Weisz.

Biography
Evi Blaikie (born Evelyne Juliette Weisz) was born to Hungarian immigrants, Magda Pollak and Hermann Weisz, in Paris in 1939. When the Germans entered Paris, Hermann went underground, since he was a communist. Soon after, in 1941, Magda was seized by Nazis while on her way to the grocery store and sent to a forced labor camp. Evi was left alone with her aunt Eszter, whose husband Denis, Magda's brother, had been sent south by the military. The couple's son Claude was staying with family in Hungary. Fearing for Evi's safety, Eszter decided to take the child to Budapest. Due to Evi's lack of proper identification papers, she could go no further than Vienna. After a trip to the barber, Evi successfully passed as Eszter's son Claude and was allowed to proceed to Budapest. Evi was taken in by her mother's oldest sister Kati and her husband Sanyi. Magda's second-born sister Klari and her son Peter also took up residence with the growing family. Evi quickly grew comfortable with her mother's family, and spent a great deal of time with her aunts as well as her uncle Miklos and maternal grandmother Nagyi.

Midway through the war, Magda managed to escape and make her way to Kati's home, extremely ill, having spent two and a half years in a forced labor camp. She had been caught sabotaging and had had been sentenced to solitary confinement for fourteen months. Magda was in the process of being marched to a concentration camp when, figuring she would die anyway, she escaped into the woods. She survived on snow and tree bark for three weeks, and weighed 75 pounds when she found help in a farmhouse on the Hungarian border Though she eventually made it to Kati and Sanyi's home, she nearly died in the process.

Evi and her family lived together in relative safely until March 19, 1944, when the Germans crossed the Hungarian border. Shortly thereafter, Kati's husband Sanyi was conscripted into forced labor. Magda, Evi, and Peter escaped Budapest using the names of Christian friends -- Emma Zbrinyi, Iluska Toth, and Janos Schmutzler. Magda's friend Juliska joined them, but Magda's sisters remained in Budapest. Evi, Magda and Peter fled to an area in northwestern Hungary known as Trans-Danubia, where they hid in a frigid, dirty shack. Unable to deal with the damp, cold temperature and horrible sanitary conditions, they soon moved to the Csiszar family's farmhouse where conditions were much better. They remained there until early 1945, when they were evacuated from the village due to the approach of Russian troops. The four waited for several days at a nearby railroad station before returning to the village. Although the Russians had taken control of their village in early 1945, the Germans retook it, and the two groups fought for two dangerous weeks until Trans-Danubian residents were declared "liberated" on March 27, 1945. This period was very dangerous for Evi and her family; as they had immediately identified themselves as Jews in order to obtain Russian protection. The villagers felt betrayed by their forged identities, and there was the danger of their being identified as Jews to the Germans who had retaken the village. However, Evi, Magda, Peter, and Juliska survived the period of turmoil, and returned to Budapest, where they were reunited with Kati and Klari. Miklos and his wife as well as grandmother Nagyi had perished in 1944 in Auschwitz. Sanyi died in the forced labor camp in Hungary in 1944.