Miklos Roth holds a name card intended to help any of his surviving family members locate him at the Kloster Indersdorf DP camp. 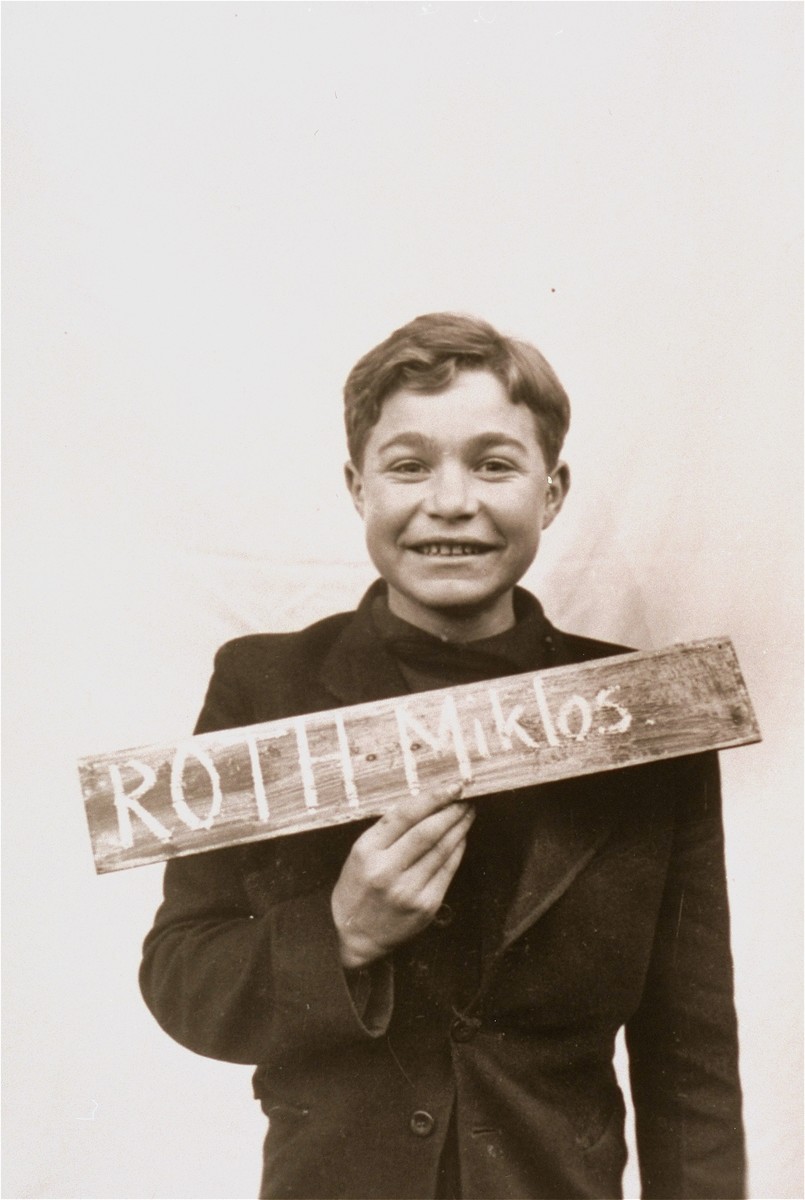 Miklos Roth holds a name card intended to help any of his surviving family members locate him at the Kloster Indersdorf DP camp.

This photograph was published in newspapers to facilitate reuniting the family.

[Sources: Fischer, Greta. Oral testimony, USHMM Archives
Koenigseder, Angelika/ Wetzel, Juliane. Lebensmut im Wartesaal, Fischer Verlag, 1995, p.256.; email by German researcher Anna Andlauer]
Biography
Miklos Roth, later known as Michael, came from a family of Hungarian Jews. His older brother, Sandor, escaped to Palestine prior to the Nazi takeover of Hungary. His mother, Regina (née Weinberger), his sister, Ibolya, and brothers Tibor and Imre were murdered upon arrival at Auschwitz in 1944. His father, Meynhart, died on a death march in March or April 1945. In May 1946, Miklos emigrated to the United States to live with his Aunt Freida. He served in the U.S. Marine Corps and graduated from college. He spent many years in retail management and then worked in real estate. He kept in touch with several of the boys he met while he was at Kloster Indersdorf. He attended a reunion of Kloster Indersdorf children and appeared in a documentary about them. Michael Roth passed away on February 24, 2011. His relatives remember him as generous, warm-hearted, self-reliant, and resilient.

Miklos (later Michael) Roth is the son of Menyhert Roth and Regina Weinberger Roth. He was born on March 29, 1931 in Ricse, Hungary where his father was a sexton. He had three siblings: Sandor, Tibor and Imre. Following the German invasion of Hungary in March 1944, he was taken to a ghetto in Satoralya. The following month he was deported to Auschwitz. His mother and two younger brothers, Tibor and Imre, were killed upon arrival. Miklos and his father stayed in Auschwitz briefly and then were sent to Kitlitztreben. They stayed there until February 1945 and then were marched to Buchenwald and Flossenbuerg. Menyhert was shot and killed on April 7 after he fell down while marching. Miklos continued on alone. Of 1500 prisoners who began the death march, Miklos was one of only 170 still alive when the prisoners arrived in Flossenbuerg on April 17. One week later, on April 23, 1945, the US army liberated Miklos at the age of 14. Miklos, who was extremely ill upon his liberation, was nursed back to health at a makeshift US army hospital. After his recuperation, Miklos went to the Kloster Indersdorf children's home and stayed there from August 1945 until May 1946. In May he came to the United States on board the Marine Flasher, sailing out of Bremerhaven Germany, to live with an aunt in the Bronx who had arrived in 1936. Of Miklos' immediate family, only Sandor, who had gone to Palestine, survived.