Lea Feldblum poses next to the fountain at the children's home in Izieu. 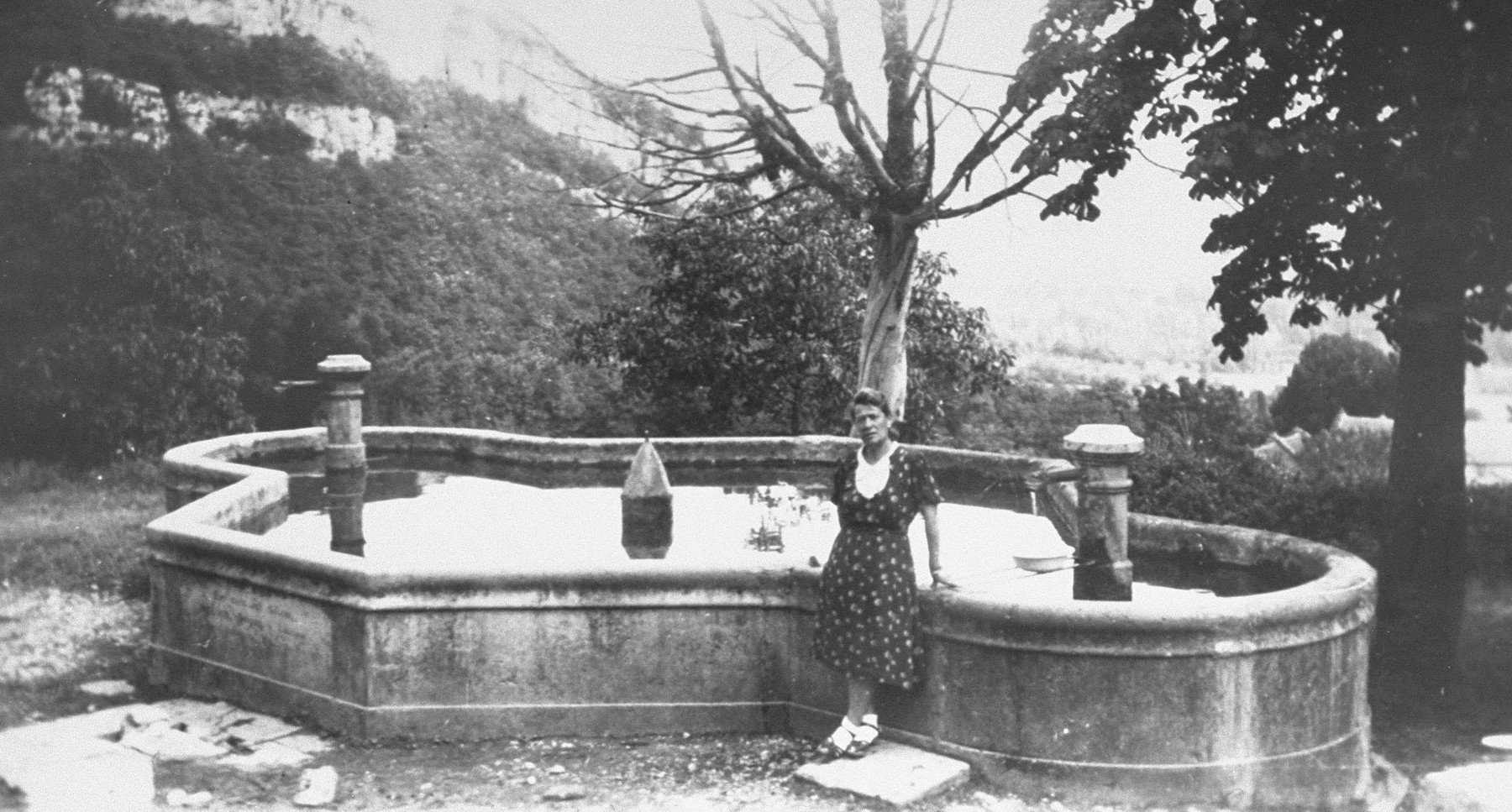 Lea Feldblum poses next to the fountain at the children's home in Izieu.

Event History
The children's home in Izieu was opened in April 1943 to serve as a refuge for Jewish children threatened with arrest and deportation during the German occupation of France. It was established in an empty farm house in a remote mountain village overlooking the Rhone River valley, by the former Red Cross nurse, Sabina Zlatin, who co-directed the home with her husband Miron. The original group of children that lived in the Izieu home were transferred from the Palavas-les-Flots OSE center and the Campestre à Lodève home (both in the Hérault), which had recently been closed. Although the Izieu home was independently operated, the Zlatins received a stipend for each child from the OSE. On April 6, 1944, one year after it opened, the home was raided in an operation planned by the Lyon Gestapo, under the command of Klaus Barbie. The raid, which took place on a French holiday, took everyone by surprise, and only one person, Léon Reifman, was able to escape. Sabina Zlatin was away at the time, having gone to Montpellier to arrange for the transfer of the children to a safer location. In all, 43 children and seven adults were rounded-up in trucks and taken to the Fort Montluc prison in Lyon. The following day they were transported by train to Drancy, so as to preclude attempts by regional authorities to secure their release. From Drancy, Miron Zlatin and two children were sent to Tallin, Estonia, where they were taken to a fortress and shot to death. The others were deported to Auschwitz-Birkenau, where all but Léa Feldblum were sent directly to the gas chambers.
Biography
Laja (Léa) Feldblum was born July 1, 1918 in Warsaw. She had two siblings, a sister Rywka and a brother Moses. Her family moved to Antwerp in 1929. After the German occupation of Belgium the Feldblums fled to France, where they were assigned residence at Bousquet-d'Orb near Montpellier. Léa's parents died in Montpellier eight months apart. Her sister and brother were deported to their death in Auschwitz on September 12, 1942. Léa then went to work as a teacher and counselor at the OSE children's home in Palavas-les-Flots. From there she moved to the home in Campestre à Lodève. Léa was then transferred to the OSE's new headquarters in Chambèry, in the Italian zone. Finally, she joined the staff of the children's home in Izieu, where she lived under the assumed name of Marie-Louise Decoste. Léa was rounded-up during the April 6 raid on the home. At Drancy she revealed her true identity so that she would be deported with the children. (Léa had already twice declined the opportunity to cross into Switzerland.) When she arrived in Auschwitz on April 15, 1944, Léa led the column of Izieu children to the selection point. When she informed the SS that these children were from a home, she was ruthlessly separated from them and sent to the prisoners' camp. Léa survived and was liberated at Auschwitz in January 1945. She soon returned to France by way of Odessa. In 1946 Léa immigrated to Palestine, where she was married that same year. Two years later, however, her husband fell in the Israeli War of Independence.

Diane Fenster (born Diane Popowski) is the daughter of Symcha Binem Popowski, a Polish Jew from Wyszkow, and Hélène (Krundel) Popowski, a Belgian Jew. She was born on April 22, 1940 in Luxembourg, where her parents were then living, only weeks before the German invasion. On December 13, 1940 the family fled to the south of France to the small town of Prades-le-Lez, not far from Montpellier. Shortly thereafter in 1941, the family was sent to the Agde internment camp in Hérault. Fearing for her daughter's safety, Hélène made contact with Sabine Zlatin, a Jewish woman working in the camp as a Red Cross nurse. Mme. Zlatin was engaged in removing older children from the camp, and Hélène pleaded with her to find a hiding place for Diane though she was only one year old. Sabine smuggled the infant out of the camp wrapped in a blanket inside her knapsack, which she wore under her cape. To keep her quiet she gave Diane a sugar cube to suck on. Shortly afterwards Symcha and Hélène were deported to Drancy, and from there, to Auschwitz on September 11, 1942. Mme. Zlatin brought Diane to her grandmother who had not been taken to Agde because she was too old and frail. Together they hid in the woods. When Diane became very ill from the cold and damp, Mme. Zlatin again came to her aid and placed her in the home of Marie Antoinette Pallarès in Montpellier. Pallarès' three older children, Renée, Paulette, and Guy, also helped care for Diane. During the summer of 1943, Mme. Zlatin asked the Pallarès children if they would help care for the refugee children living in the nearby children's home of Izieu that she directed. The Pallarès spent the summer at the home and brought Diane with them. They also brought a camera with them and shot photos of the Izieu children. During the spring of 1944 the Pallarès children returned to Izieu along with Diane for a short stay. They left one day before the Gestapo raided Izieu on April 6, 1944, arresting the children and Mme. Zlatin's husband, Miron. After the raid, Diane continued to live in Montpellier at the Pallarès home. When the war was over, Diane's uncle, Simon Krundel, who had survived Auschwitz, came to France and found her. He had wanted to adopt her but his health would not permit it. Diane's father, Symcha, also survived but only returned to France in 1949 after a long period of recuperation from the camps. After his liberation he wrote to relatives in London asking for money to buy a sewing machine so that he could reestablish himself as a tailor. These relatives informed him that Diane had survived and was still living in Montpellier. Symcha came to retrieve his daughter and bring her back with him to Paris. Diane was very unhappy to be separated from the Pallarès whom she considered to be her real family, having lived with them for seven years. Since Symcha could not care for Diane alone, he placed her in a convent school near Paris. He also remarried, hoping to find a new mother for his daughter. However, the marriage was not successful and later ended in divorce. Diane was frequently beaten as a child, and her stepmother forced her to break off any contact with the Pallarès family. The Popowskis immigrated to Canada in 1951, where Diane was placed in a series of foster homes. After she married in 1957 Diane regained contact with the Pallarès family and later arranged for Yad Vashem to honor them as Righteous Among the Nations.