Defendant Franz von Papen receives a visit from his son while in prison at the International Military Tribunal trial of war criminals at Nuremberg. 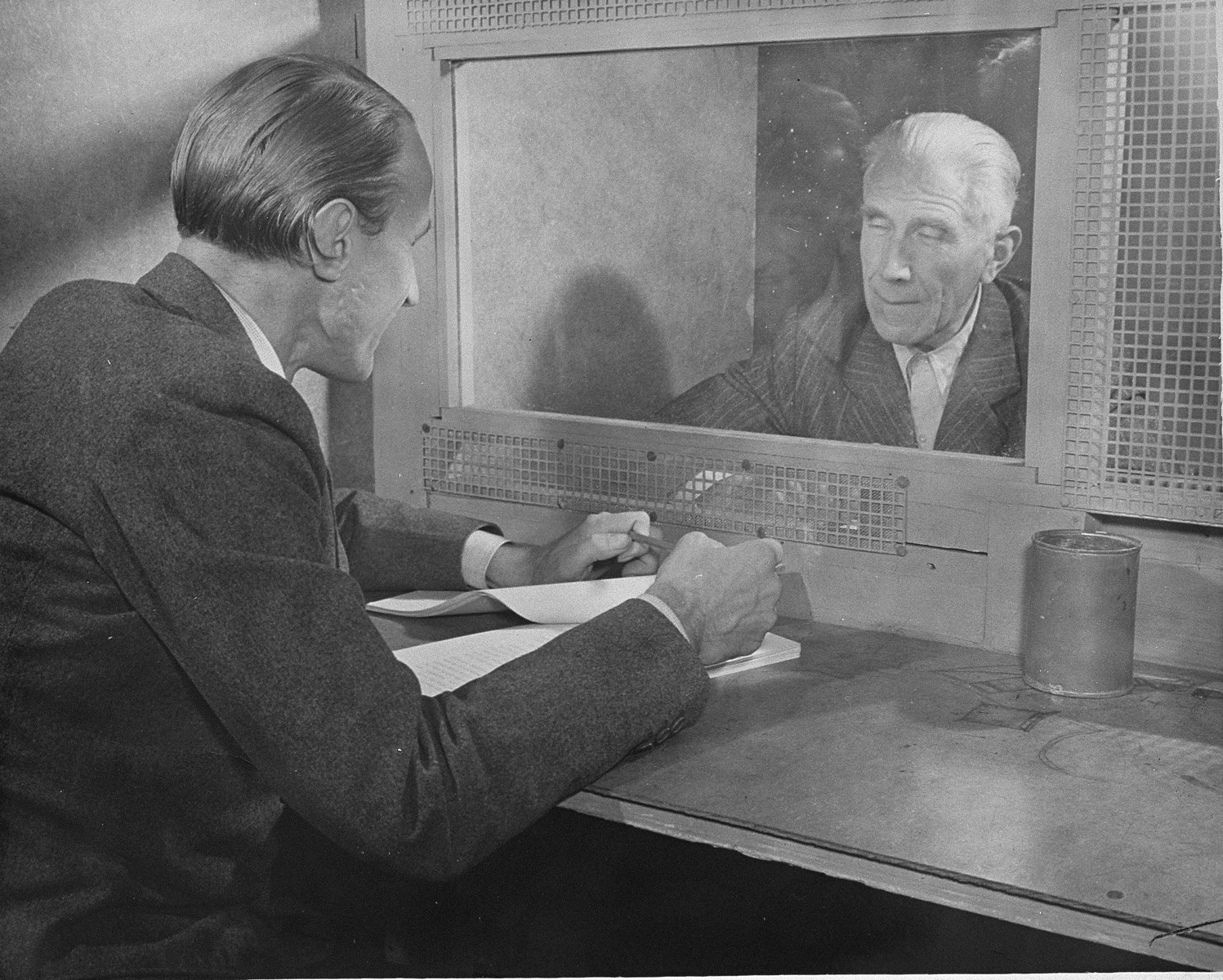 Defendant Franz von Papen receives a visit from his son while in prison at the International Military Tribunal trial of war criminals at Nuremberg.

The judges delivered their verdict on October 1, 1946. Agreement among three out of four judges was needed for conviction. Twelve defendants were sentenced to death, among them Joachim von Ribbentrop, Hans Frank, Alfred Rosenberg, and Julius Streicher. They were hanged, cremated in Dachau, and their ashes were dropped in the Isar River. Hermann Goering escaped the hangman's noose by committing suicide the night before. The IMT sentenced three defendants to life imprisonment and four to prison terms ranging from 10 to 20 years. It acquitted three of the defendants.
https://encyclopedia.ushmm.org/content/en/article/international-military-tribunal-at-nuremberg.
Biography
Franz von Papen, (1879-1969) was a Weimar politician, Chancellor of Germany (June-November, 1932), Vice Chancellor (1933-34), and ambassadors to Austria (1934-38) and Turkey (1939-44). Following the end of World War I, Franz von Papen became a member of the extreme right-wing of the Center party. He served in the Prussian parliament from 1920 to 1928 and again from 1930 to 1932. In 1932, von Papen played a key role in removing the Center party governement of Chancellor Heinrich Bruening and replacing him as Chancellor in June of that year. In that capacity, von Papen was responsible for the removal of the Social Democratic government of Prussia and the implementation of anti-democratic emergency decrees. He also removed the ban on the SA and the SS. In November 1932, von Papen resigned from office and immediately reached an agreement with the Nazis to help remove his successor, Kurt von Schleicher, and replace him with Adolf Hitler. Following the Nazi seizure of power in January 1933, von Papen was appointed vice-Chancellor. He resigned his post in 1934, after narrowly escaping with his life during the Roehm purge. He was appointed ambassador to Austria where he played a decisive role in the Anschluss of 1938. In 1939 von Papen became ambassador to Turkey, where he remained until 1944. During a reception on August 13, 1944, Adolf Hitler decorated the former ambassador to Turkey with the Knight's Cross and the War Service Cross. Arrested and tried at Nuremberg in 1946, von Papen was acquitted of all charges. In 1949 he was brought to trial by a West German denazification court which found him guilty and sentenced him to time in a labor camp. However, he was immediately released following a successful appeal.