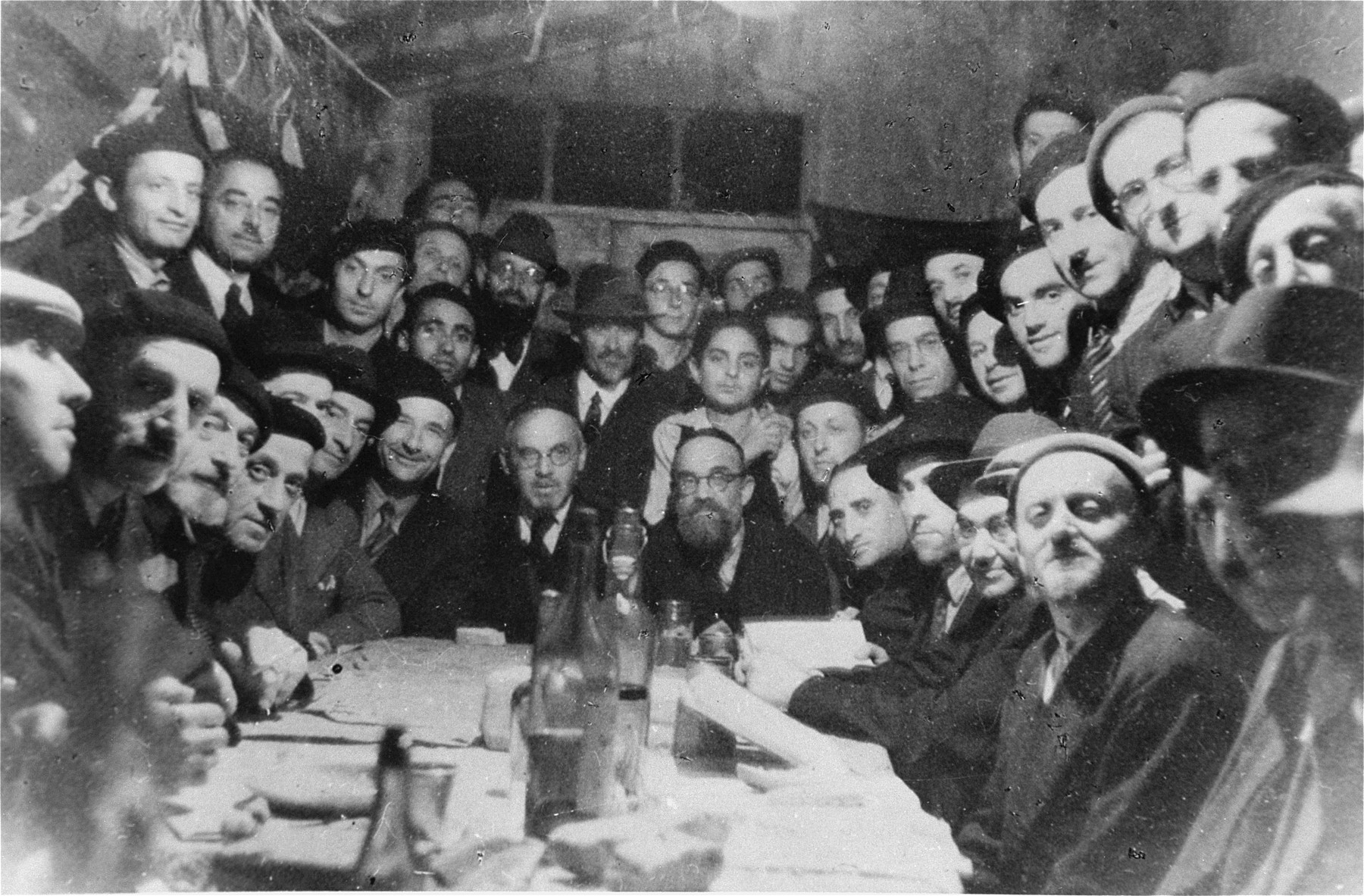 Jewish prisoners celebrate in the Les Milles transit camp.
Among those pictured is Rabbi Siegmund Marx (left of center, wearing a beard), a Jewish refugee from Speyer, Germany.

https://www.ushmm.org/wlc/en/article.php?ModuleId=10005429.
Biography
Ernest Marx is the son of Siegmund and Bertha (Steinberger) Marx. He was born in 1925 in Gelnhausen, Germany (near Hanau). In 1927 his family moved to Rothenberg, and in 1933 moved again to Speyer, where his father worked as a religious teacher and cantor before receiving his rabbinical ordination in 1936. Ernest had one older brother, Julius (b. 1922). On November 9, 1938 during the Kristallnacht pogrom, Ernest's father was arrested and told to bring along one son. It was quickly decided that Ernest would accompany Siegmund, while Julius would stay behind to take care of Bertha. Ernest and his father were sent to Dachau for six weeks, during which time Ernest celebrated his bar mitzvah. Shortly after their release Julius was sent to Switzerland and Ernest, to France on a Kindertransport. Both parents accompanied Ernest's transport as chaperones. Once in France, Ernest was enrolled at the Ecole Maimonides near Paris, where he remained until the French defeat in June 1940. At that time he was put under the protection of the OSE (Oeuvre de secours aux enfants) and sent to the Eaubonne children's home outside Paris. A few months later he was transferred to the Montintin home, where he remained until 1942. Sometime in or around 1939 the Marx family received American immigration visas, but they were never able to use them to leave Europe. Ernest's father was arrested in September 1939 as a German enemy alien and sent to Saint Germain. The following summer after the fall of France, he was rearrested as a foreign-born Jew and imprisoned in the Les Milles internment camp. On 7 September 1942 he was transferred to Drancy and from there, was deported to his death in Auschwitz. Ernest's mother eluded arrest and in 1942 was living in hiding in Limoges. Ernest joined her there in 1942, but shortly after their reunion both were arrested separately and sent to the Gurs internment camp, where they were unaware of each other's presence. Ernest managed to escape from the camp with four friends. The opportunity to flee came about suddenly during a game of soccer when their ball was inadvertently kicked over the camp fence. They climbed over the fence to retrieve the ball but never returned. Ernest subsequently joined up with the Chasseur Alpin, a unit of the French Maquis resistance. Ernest's mother remained in Gurs and was slated for transfer to Drancy when she suffered a stroke and was left for dead. Miraculously, she recovered and survived the rest of the war. After the liberation Ernest found her by chance on a streetcar in Grenoble. Later, the two were reunited with Julius who had remained in Switzerland throughout the war. After Ernest completed his military service in the French army, the surviving members of the Marx family immigrated to the United States on June 17, 1947.