American prosecutor James M. McHaney (left) at the podium during the Pohl/WVHA trial. Behind him from left to right are Brigadier General Telford Taylor, US Military Governor Lucius Clay, and Clay's wife. 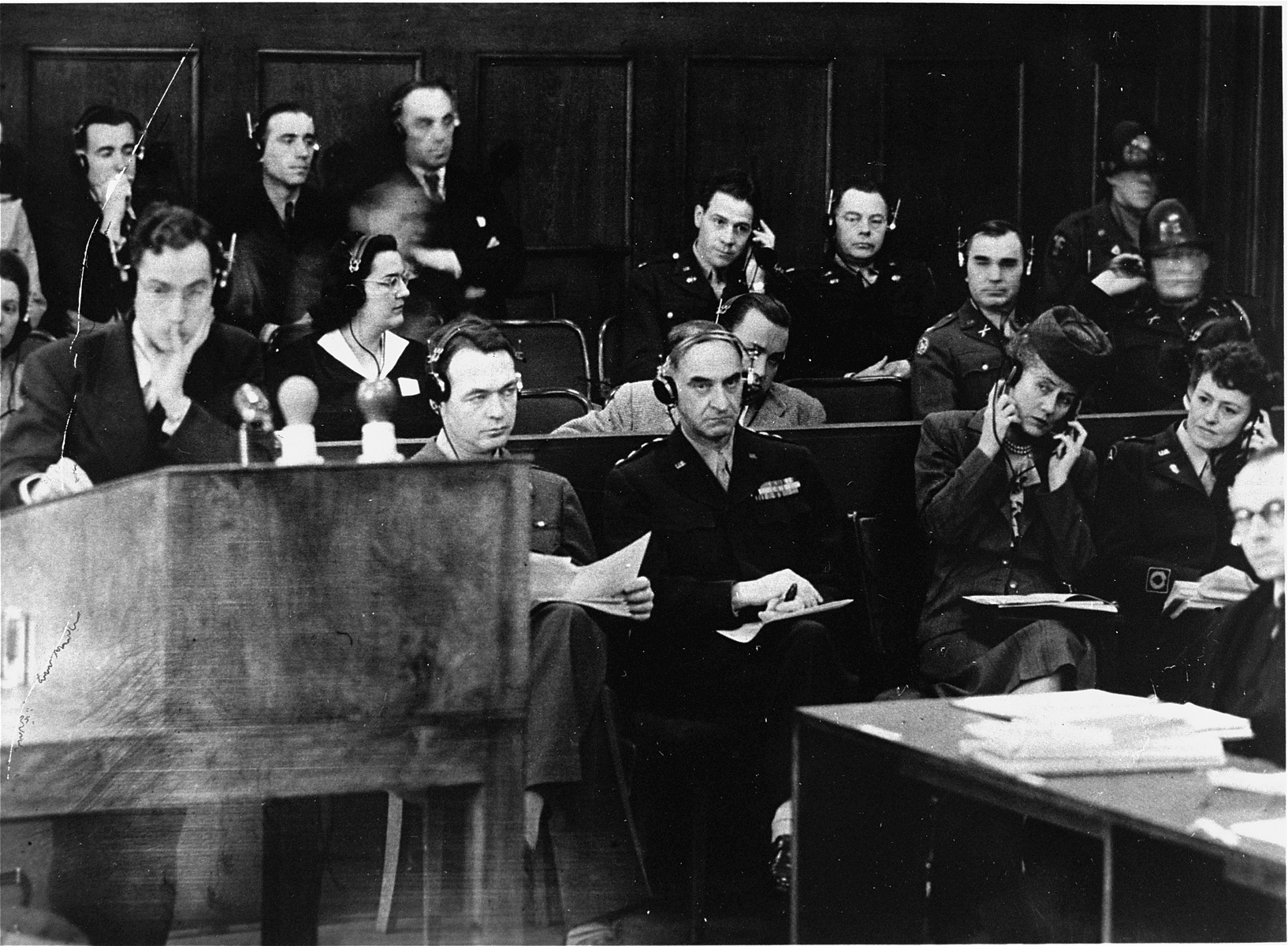 American prosecutor James M. McHaney (left) at the podium during the Pohl/WVHA trial. Behind him from left to right are Brigadier General Telford Taylor, US Military Governor Lucius Clay, and Clay's wife.

Event History
In January 1947 the Military Tribunal II, which had been created by the U.S. Military Government for Germany on 14 December 1946, took on the trial of Oswald Pohl and the WVHA, the fourth subsequent Nuremberg proceeding. Eighteen defendants, all members of the WVHA (the Economic and Administrative Main Office) were indicted on 13 January 1947 and arraigned on 10 March. The indictment contained four counts: participation in a common design or conspiracy to commit war crimes and crimes against humanity; war crimes against civilians of German occupied territories and POWs in concentration camps (which the WVHA took control of in the spring of 1942); crimes against humanity against German civilians and nationals of other countries; and membership in the SS, recently declared a criminal organization by the International Military Tribunal. All the defendants were indicted under the first three counts, and all but one under the fourth count. The trial lasted from 8 April until 22 September and the Tribunal delivered its judgment and sentences on 3 November. The first count of the indictment (conspiracy) was disregarded and judgments were delivered only on the last three counts. Three of the defendants were acquitted, but the rest were found guilty: two under only the second and third counts and thirteen under the second, third, and fourth counts. The Tribunal sentenced four of the guilty defendants to death, three to life in prison, and eight to prison terms of ten, twenty, or twenty-five years. Seven months later, however, the Military Governor, General Lucius D. Clay, reconvened the Military Tribunal II, at the request of the judges, so the defendants could file additional briefs. After hearing more evidence presented on behalf of the defendants, the Tribunal returned its supplemental judgment on 11 August 1948, reaffirming its findings for all the defendants as well as the sentences for all but four. One of the death sentences was reduced to life imprisonment, one life sentence to twenty years in prison, one twenty-five year term to twenty years, and one twenty year term to fifteen years. The Military Governor confirmed the revised sentences on 30 April and 11 May 1949. The proceeding’s chief defendant, head of the Economic and Administrative Main Office, Oswald Pohl, was executed on June 8, 1951.