A social gathering at the Foehrenwald displaced persons camp. 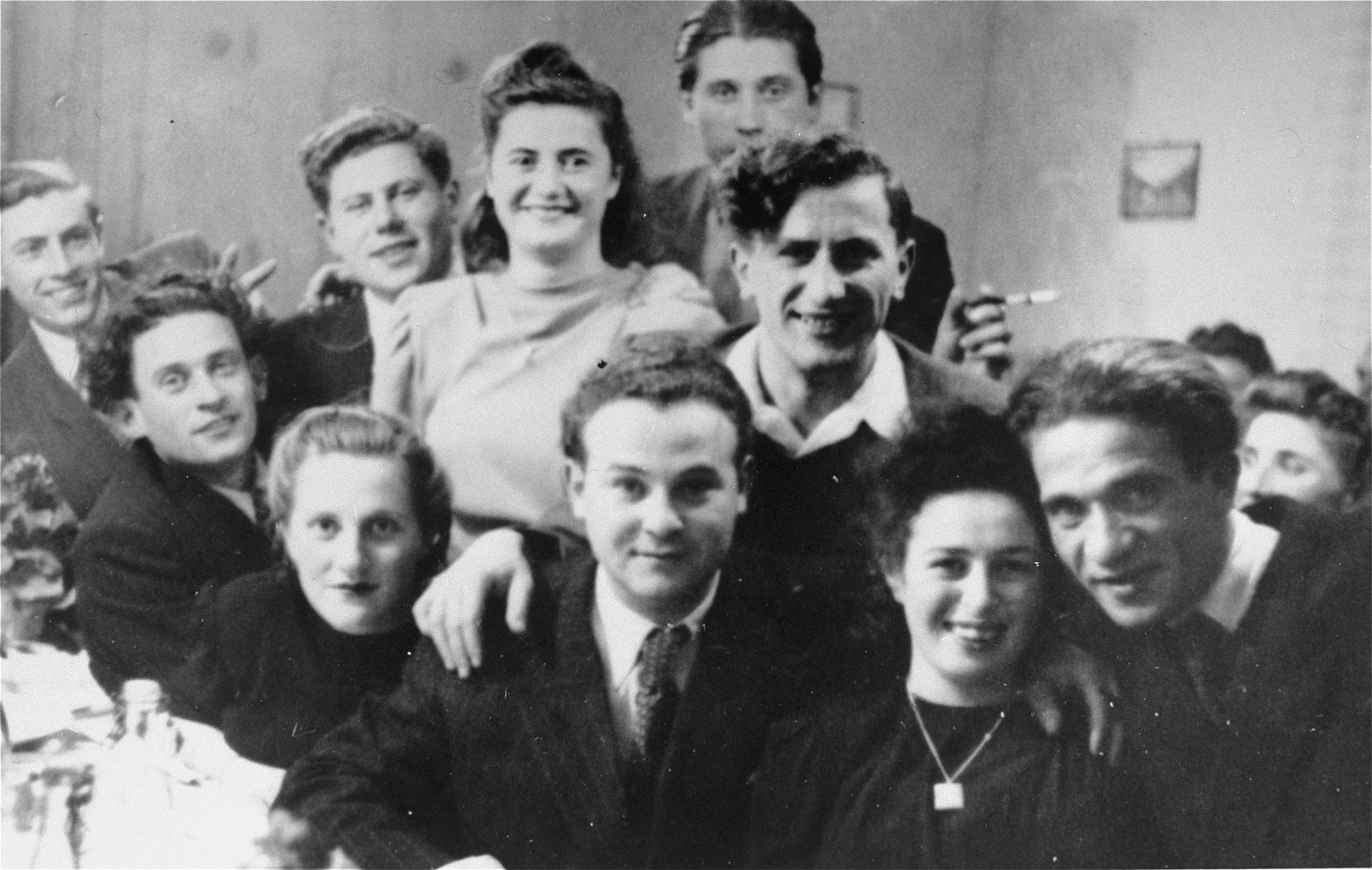 A social gathering at the Foehrenwald displaced persons camp.

Among those pictured are Israel and Ester Korman (second and third from the left), Sam and Regina Spiegel (back row) David Bajer (standing in the center), and Leon and Rose Badner (first and second from right).

Israel's mother and Sam's father were siblings. Rose and Ester survived the war hidden by a gentile woman in Babice named Petronela Lach [?].

Biography
David Bayer (born David Bajer) is the son of Manes and Sarah Bajer. He was born September 27, 1922 in Kozienice, Poland, where his father operated a small shoe factory out of his house. David had three siblings: Rosa (b. 1920), Joshua (b. 1927) and Rachel (b. 1930). After the German invasion of Poland in September 1939, David and his family fled into the forest, where they hid for two or three days before returning home. Soon afterwards, they were ordered to mark the door of their home with a Star of David. A short time later, David was arrested while waiting in line at a bakery, for violating the curfew. He was sent to a labor camp in Radom and released only after his sister Rosa offered a bribe to a camp guard. Two or three months later, the Bajers were forced to move into the Kozienice ghetto, taking with them whatever goods they could transport on a sled. As everyone was required to perform forced labor, David volunteered to work on a farm in Brzeznica, where he was paid in potatoes to herd sheep. He was soon fired, however, after the herd ran onto a train track and some of the sheep were killed. David then found work as a houseboy for a sympathetic Gestapo officer. One day, when David happened to be rounded-up with a group of 15 other Jews and forced to dance around a Torah scroll that had been set aflame, his kindly employer pulled him out of the circle and brought him back to his home. Later, David was sent to work on a crew that was digging a canal. On September 27, 1942 the Kozienice ghetto was liquidated, and all its inhabitants, except for the canal builders, were transported to Treblinka. Among those who perished were David's parents and two of his siblings. (His grandparents had died in the ghetto.) David's sister Rosa escaped their fate by fleeing to the Aryan side. She was eventually caught, however, and thrown into jail. One day, David slipped away from his work site to look for food. When he returned he discovered that the rest of his crew had been taken away. David then hid for a few days with a farmer who told him that a group of Jews had been selected to stay in the ghetto to clean it up. David decided to sneak back into the ghetto and remained there until December 1942. He was then sent to a series of labor camps, including Radom, Szydlowiec and finally, Pionki, where he was put to work in the WASAG Chemie munitions factory. Working with the chemicals was extremely hazardous, but he benefited from the extra rations he received from sympathetic Polish co-workers. David had several close brushes with death while at Pionki. After the factory conveyor belt caught on fire, Ukrainian guards arrested David and the other Jewish workers and sentenced them to death. Fortunately, the German factory director halted the execution because he needed the trained workers. Twice David tried and failed to escape, and on the second attempt, he was shot in the leg. Then in early June, 1944, David was badly burned while driving a locomotive that exploded. During the summer of 1944, the Germans began evacuating Pionki in response to the Russian advance, and David was deported to Auschwitz in July 1944. When he arrived, a member of the Sonderkommando advised him to say he was a chemist. This would make him more useful and account for his burns. After passing the selection, David was tattooed with the number B74 and taken to the Gypsy camp. There he received medical treatment for his burns by a Jewish physician. Afterwards, David was put to work mining coal in nearby Jaworzno, where each prisoner had to fill a daily quota of 18 loads per day. When Auschwitz was evacuated in January 1945, David was put on a death march that ended at the Blechhammer labor camp. Shortly before the end of the war, he escaped with two Soviet prisoners after the camp's electricity was cut. The Red Army liberated them a few days later. After spending two weeks in a hospital, David returned to Kozienice, where he moved in with a group of Jewish survivors. Subsequently, they moved to Lodz and then fled to the West by way of Czechoslovakia. When he reached Germany, David went to live at the Foehrenwald displaced persons camp. Unable to get an immigration certificate to Palestine, and unwilling to go to the US, where he knew no one, David accepted an invitation from a former friend from Kozienice, who had immigrated to Panama in 1938. When he arrived in Panama, he chose to live in the country near the Indian town of Concepcion, rather than in the city with his friend. David was not in the country long when he learned that the RAF Vasilyades, a ship bound for Palestine, was scheduled to be passing through the canal. When it arrived David got himself hired as a crew member. The Vasilyades was hauling a German torpedo boat called the Honduras, that the Jewish Agency had purchased to be the first ship of the new Israeli navy. However, after crossing the Atlantic, the ship encountered a severe storm off Crete, and the torpedo boat sank. After his arrival in Palestine, David joined the Haganah and fought in the Israeli War of Independence. In 1950 he returned to Panama and remained there until his immigration to the United States in 1955.