A postcard sent from the Bedzin ghetto in Kamionka by C. Wiener to Alfred Schwartzbaum in Lausanne, Switzerland. The postcard was sent on September 21, 1943. The encoded message, written by three people, urges Alfred Schwarzbaum to send them foreign visas as soon as possible. 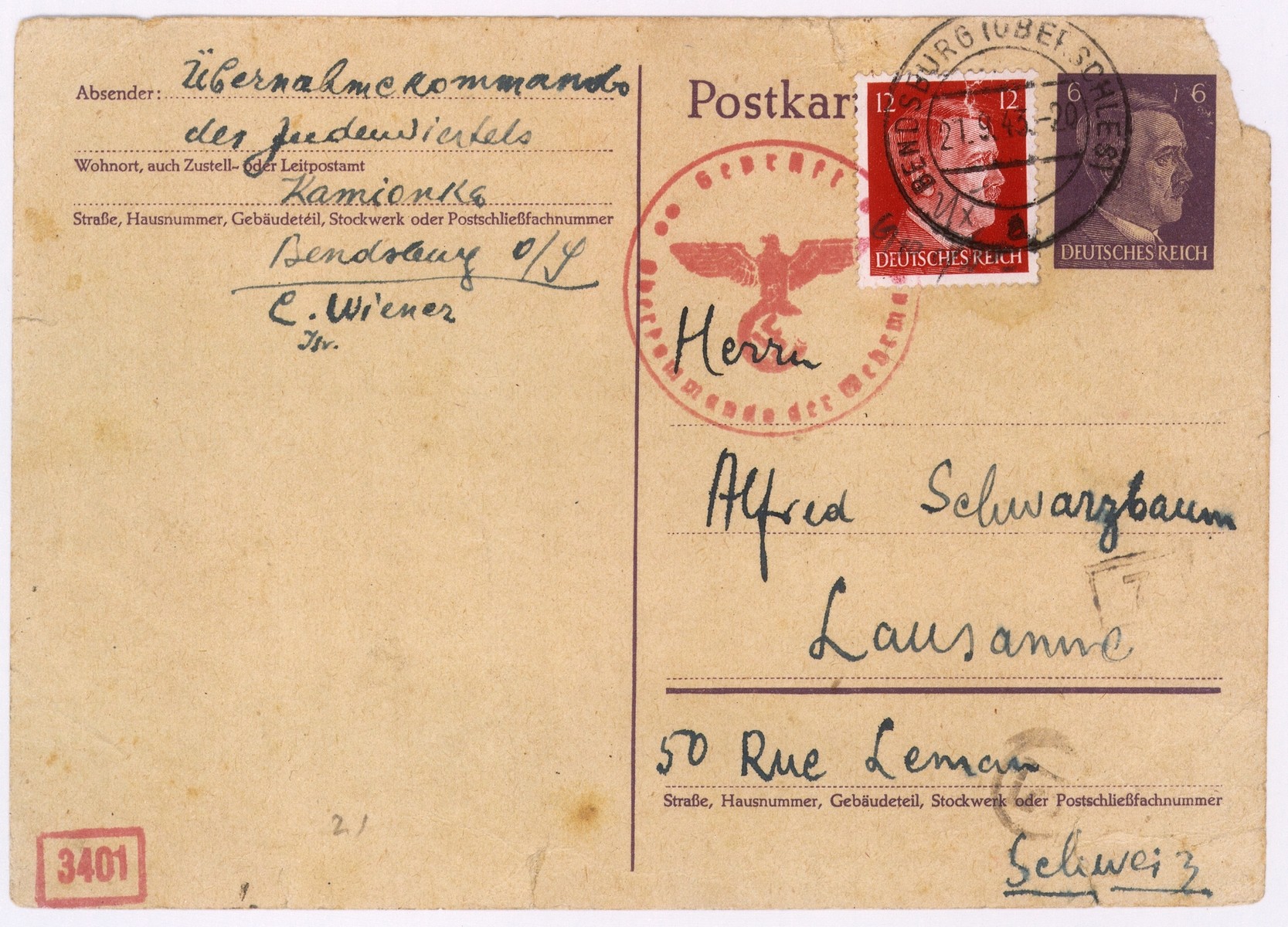 A postcard sent from the Bedzin ghetto in Kamionka by C. Wiener to Alfred Schwartzbaum in Lausanne, Switzerland. The postcard was sent on September 21, 1943. The encoded message, written by three people, urges Alfred Schwarzbaum to send them foreign visas as soon as possible.

https://encyclopedia.ushmm.org/content/en/article/german-administration-of-poland. https://encyclopedia.ushmm.org/content/en/article/ghettos-in-poland.
Biography
Morris Rosen (born Moniek Rozen) is the son of Jakub Rozen and his second wife, Golda Chaja Warszawska. He was born October 11, 1922 in Dabrowa Gornicza, where his father worked as the official distributor of two state-controlled commodities, tobacco and acetylene. Moniek had two siblings: Josek (b. 1924) and Bluma (b. 1926), and eight half-brothers and sisters from his father's first marriage to Pola Frochwajg (who died in 1919): Leosia (b. 1898), Yehiel (b. 1900), Yitzhak (b. 1902), Rubin (b. 1905), Rozka (b. 1913), Israel (b. 1914), Ruchcia (b. 1912), Sala (b. 1917) and Tamara (b. 1918). After the Germans occupied Poland, the Rozens remained in Dabrowa. In August 1942 Moniek's parents were deported to their death in Auschwitz. At the time of their deportation Moniek and two of his brothers, Srulek and Josek, were at the Mittelstrasse labor camp in Dabrowa. In October 1942 Moniek was transferred to the Szczakowa [perhaps Szczepankowo] labor camp, where he worked in a leather workshop. A year later he was moved to the Annaberg labor camp and then to Gruenberg, where he worked in a textile factory. While in Gruenberg, Moniek was temporarily reunited with his sister Bluma. He remained there until April 1944, when he was transferred to the Kretschamberg labor camp. When this camp was evacuated in February 1945, Moniek was sent on a forced march to Buchenwald that lasted six weeks. Soon after his arrival, Moniek was transferred to Theresienstadt, where he was liberated by the Soviets on May 6, 1945. Moniek's brother-in-law, Szabtai Klugman, discovered him in Theresienstadt, and together they went in search of surviving relatives. Szabtai's wife (Moniek's older sister) Leosia was killed on a death march just days before liberation. In the course of their search, they encountered a group of young women from Dabrowa, who had barely survived a death march from the Helmbrechts factory camp in Muenchberg, Germany to the town of Volary in Bohemia. After locating his surviving siblings, Moniek went to live at the New Palestine displaced persons camp near Salzburg, Austria. He immigrated to the United States in September 1949 and settled in Baltimore. Of the eleven Rozen children, five perished during the war. Of the six who survived, one moved to America before the war, one fled to the Soviet Union, and the other four lived through ghettos, labor camps, concentration camps, and death marches.