Letter of recommendation, written on behalf of Mendel Rozenblit, by the President of the Jewish Committee in Munich. 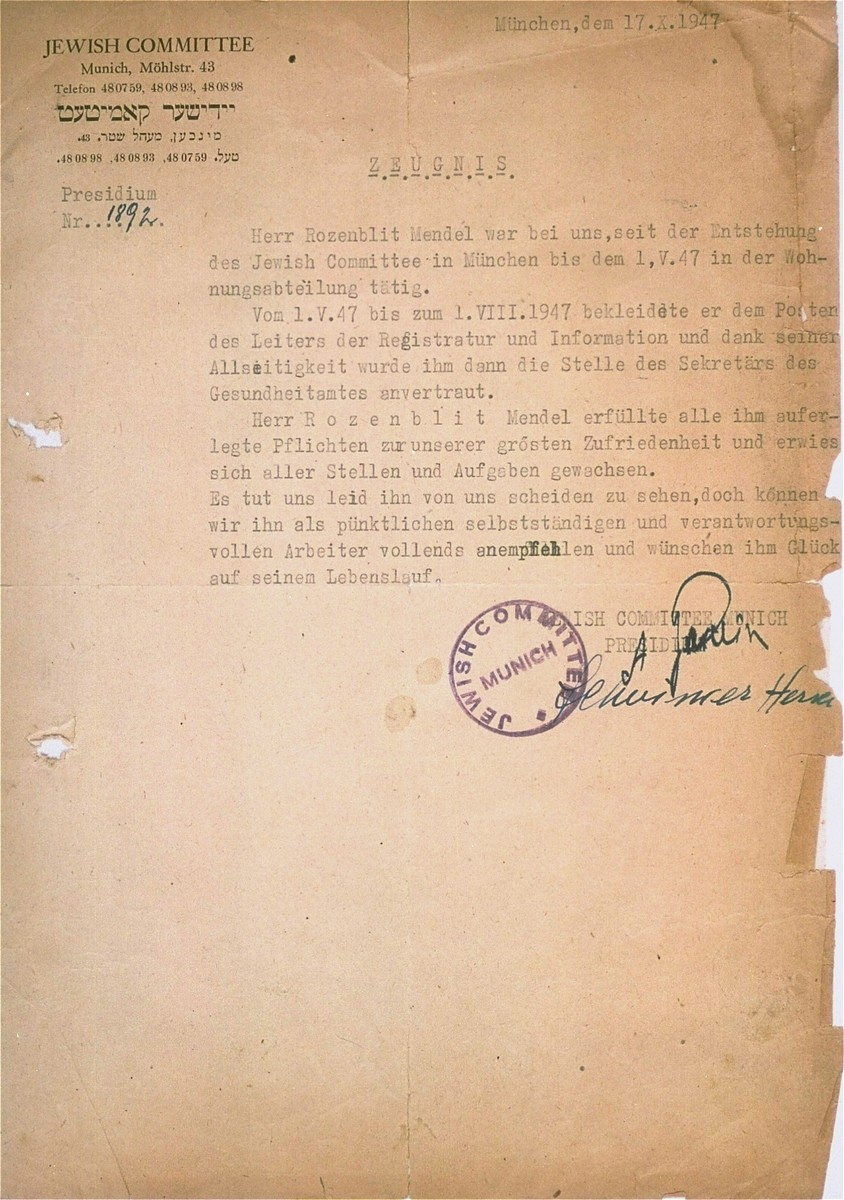 Letter of recommendation, written on behalf of Mendel Rozenblit, by the President of the Jewish Committee in Munich.

The letter attests to the fact that Rozenblit was employed by the Committee from May 1 to October 17, 1947, first in the office of registration and information, and later in the health department. The president praises Rozenblit's work and expresses regret at his departure, but wishes him luck in the future.

[Sources: Bauer, Yehuda. "The Organization of Holocaust Survivors," Yad Vashem Studies, vol. 8 (1970); Hyman, Abraham S. The Undefeated, Jerusalem, 1993; Mankowitz, Zev. "The Formation of She'erit Hapleita,"Yad Vashem Studies, vol. 20 (1990); Schwarz, Leo.The Redeemers, New York, 1953]
https://www.ushmm.org/wlc/en/article.php?ModuleId=10005459.
Biography
Mendel Rozenblit (the donor's father) was born in Lukow, Poland on November 13, 1907. He was the son of Abram Icek and Masza (Markusfeld) Rozenblit, who owned a general store in the town. Mendel had five siblings: Nehama, Shia, Simcha, Haim Yaakov, and Meir. In 1929 Mendel married and moved to Wolomin near Warsaw. The following year, his wife gave birth to a son Avraham. Soon after, however, Mira died, and Mendel married her sister Perele. A second child, Tova, was born to him in 1934. During the Nazi occupation Mendel lived in the Wolomin ghetto until it was liquidated and he was deported to Auschwitz. He spent eighteen months in the concentration camp before his evacuation in January 1945 on one of the death marches to Germany. The remaining months of the war were spent in Dachau, where he was liberated by American troops in April 1945. With the exception of his father who died in 1919, and his brother Haim, who died in Palestine in 1943, Mendel's entire family was killed by the Nazis. During the first two years after the liberation, Mendel lived independently in an apartment in Munich. Though he was urged by relatives to settle in Palestine and he explored the possibility of emigrating to Australia, Mendel opted to go to the U.S. when his visa was granted. He sailed aboard the Marine Flasher from Bremerhaven on November 27, 1947.