A dinner party in honor of General Joseph McNarney, the newly appointed commander of US forces in occupied Germany, at the Schlachtensee displaced persons camp in Berlin. 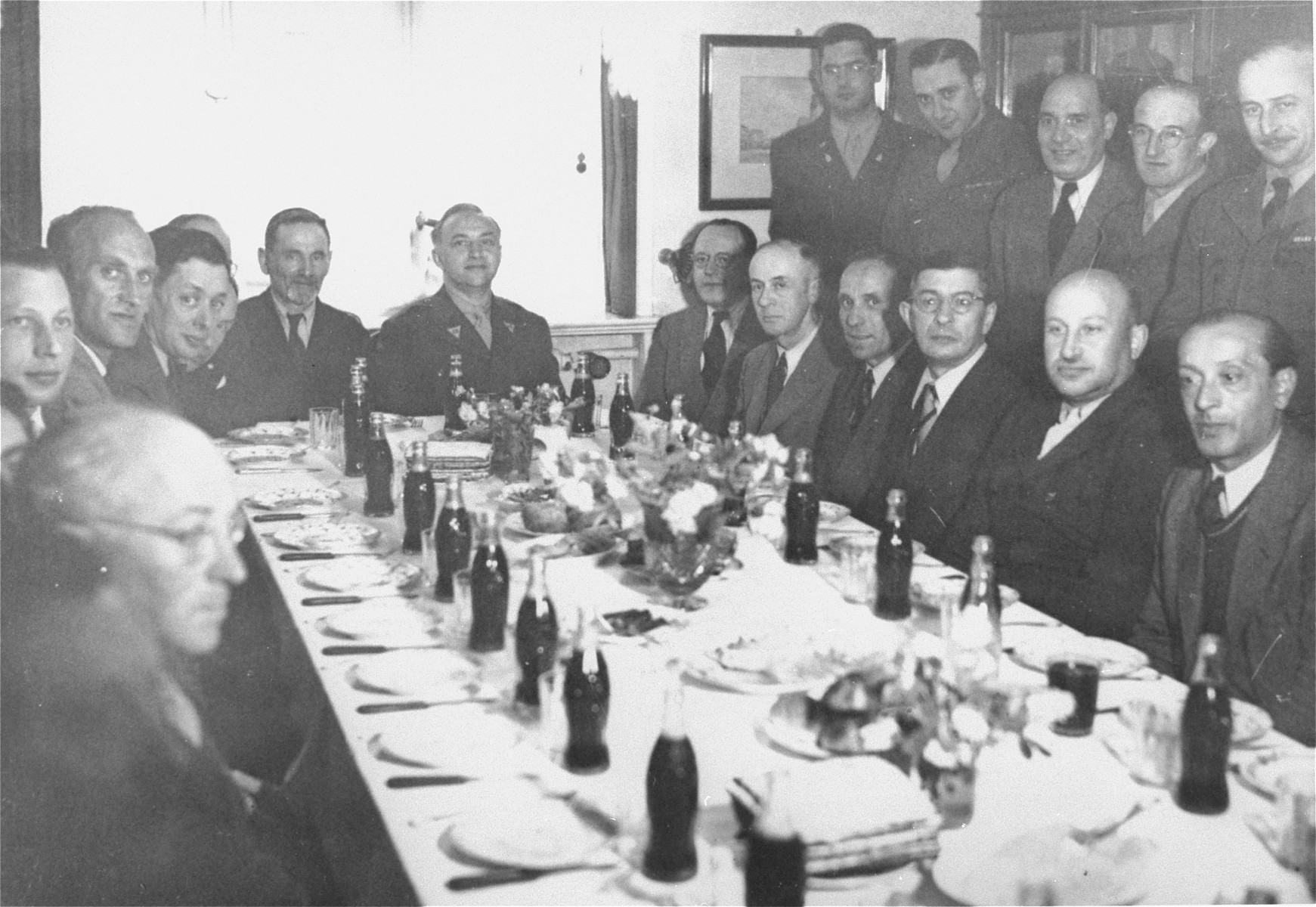 A dinner party in honor of General Joseph McNarney, the newly appointed commander of US forces in occupied Germany, at the Schlachtensee displaced persons camp in Berlin.

Among those pictured are Rabbi Philip Bernstein (at the head of the table in uniform); Chaplain Herbert Friedman (back row, first from the left); Eli Rock, JDC director for Berlin (next to Friedman); and Hans Erich Fabian (left side, leaning forward, near the head of the table).

Herbert Friedman (b. 1918), American Reform rabbi and U.S. Army chaplain, who during the American occupation of Germany served as the chief military aid to the Advisor on Jewish Affairs to the Commander of U.S. Forces. He also played a key role in supporting the efforts of the Bricha organization to move thousands of Jewish survivors from Eastern Europe into the American zones of occupation in order to facilitate their immigration to Palestine. Born and raised in New Haven, CT, Friedman was the son of Jewish immigrants from Eastern Europe. He had two brothers. Friedman attended Yale College from 1934 to 1938, during which period he closely followed political developments in Germany. He found himself growing increasingly angry at the inaction of American Jewry in the face of the Nazi threat and steadily more drawn to the political activism and Zionist commitment of Rabbi Stephen S. Wise. Soon after graduation Friedman decided to become a rabbi in order to find a platform from which to rouse American Jews to political action on behalf of European Jewry. In 1939 he enrolled at the Jewish Institute of Religion, a Reform rabbinical school established in New York by Stephen Wise, and imbued with his political ideology. After graduating in 1943 Friedman took a pulpit in Denver, CO. One year later, he enlisted as a chaplain in the army. After attending chaplaincy school and infantry training, Friedman was assigned to the 9th Infantry Division, U.S. Third Army and sent to Europe. He arrived in the spring of 1945 at the end of the war and spent a brief period in Belgium before being moved to Bavaria. Friedman met his first Jewish survivors in April 1945 wandering around the country roads as they emerged from the hundreds of slave labor camps and factories that dotted the region. On his own initiative, he borrowed a truck and drove along the roads in search of Jewish survivors. Once he collected a group he would find a building and establish a temporary shelter where they could be housed, fed and disinfected until a more permanent residence could be found for them.