Newly arrived refugees stand in line to get soap and towels at the Fort Ontario shelter. 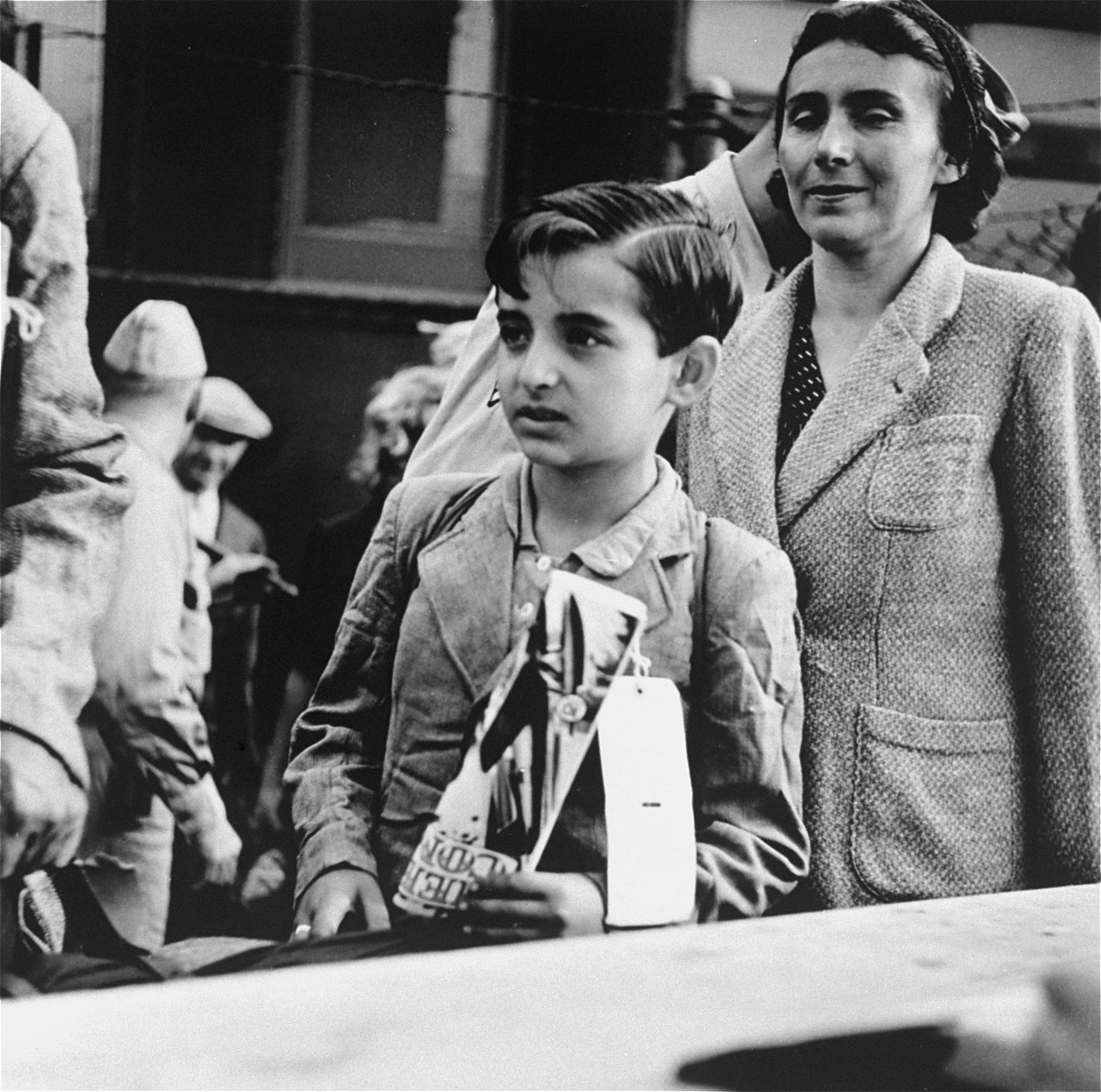 Newly arrived refugees stand in line to get soap and towels at the Fort Ontario shelter.

Pictured is Irma Gruenberg and her 11-year-old son, Walter, from Fiume, Italy.

https://encyclopedia.ushmm.org/content/en/article/the-war-refugee-board.
Biography
Walter Greenberg (born Walter Gruenberg) is the son of Irma Schwartsenberg and Jakob Gruenberg. He was born on January 24, 1933 in Fiume Italy, where his father worked as a chef and baker. Jakob was born in Vienna and had served in the Austro-Hungarian army in World War I. After the war he decided to stay in Italy. There he met and married Irma Schwarzenberg who came to Italy from Yugoslavia where she had been living with an aunt. After the German Anschluss, Jakob helped smuggle Austrian Jews into Yugoslavia. Some time in 1940 Jakob was arrested by the Italian police and jailed for a month. After his release, he heard that foreign Jews would be subject to round-ups. Since Jakob was still an Austrian citizen, he decided that the family should flee Italy. They joined a group of approximately 300 Jews who purchased tickets for passage to Palestine from Libya. They arrived in Benghazi, but the ship never materialized, and the refugees were imprisoned in a camp. After about a month, they were shipped back to Italy. Upon their arrival, the group was jailed temporarily in Naples in Pogio Reala, and then transferred to the Ferramonti concentration camp after it opened in June 1940. The Gruenbergs lived in the camp for about a year and half. Jakob worked in the camp's kitchen and often left the camp by horse and wagon in order purchase food provisions. With the cooperation of a sympathetic guard he arranged for the family to escape during one such shopping expedition. They went to the town of Carsoli in Abruzi. Though they lived there openly as Jews, under the terms of free confinement, they had to report daily to the local police. Jakob was prohibited from working, but he supported the family with a small vegetable garden. After the Italian capitulation to the Germans, the town's mayor asked Jakob to serve as a translator for German officers. They asked him whether there were any Jews in town and why he spoke German so well. The German told Jakob that he wanted to bring him to Rome to verify his story. That evening the Gruenberg family and the town's other 13 Jews fled to the mountains. While hiding in the mountains, Irma overheard a group of Yugoslavians talking about how they wanted to rape her. She decided to confront them. Surprised that she spoke Serbo-Croatian, they took the family under their wings and supplied them with false papers. The Gruenbergs stayed in the mountains until two weeks after Rome's liberation in June 1944. They then made their way back to Rome and went to the large synagogue which served as a central gathering place for liberated Jews. Irma was surprised to discover her brother Fred, who she thought had perished in Yugoslavia. He told them that he, his wife Ana, and son Slavko (Ben) were about to leave for the United States and recommended that they do the same. About two weeks later, the Gruenbergs joined them and a convoy of 982 refugees. They sailed from Italy aboard the Henry Gibbons on July 8, 1944 and came to the Fort Ontario refugee shelter in Oswego, New York.