Group portrait of the staff of the International Committee for European Immigrants in China. 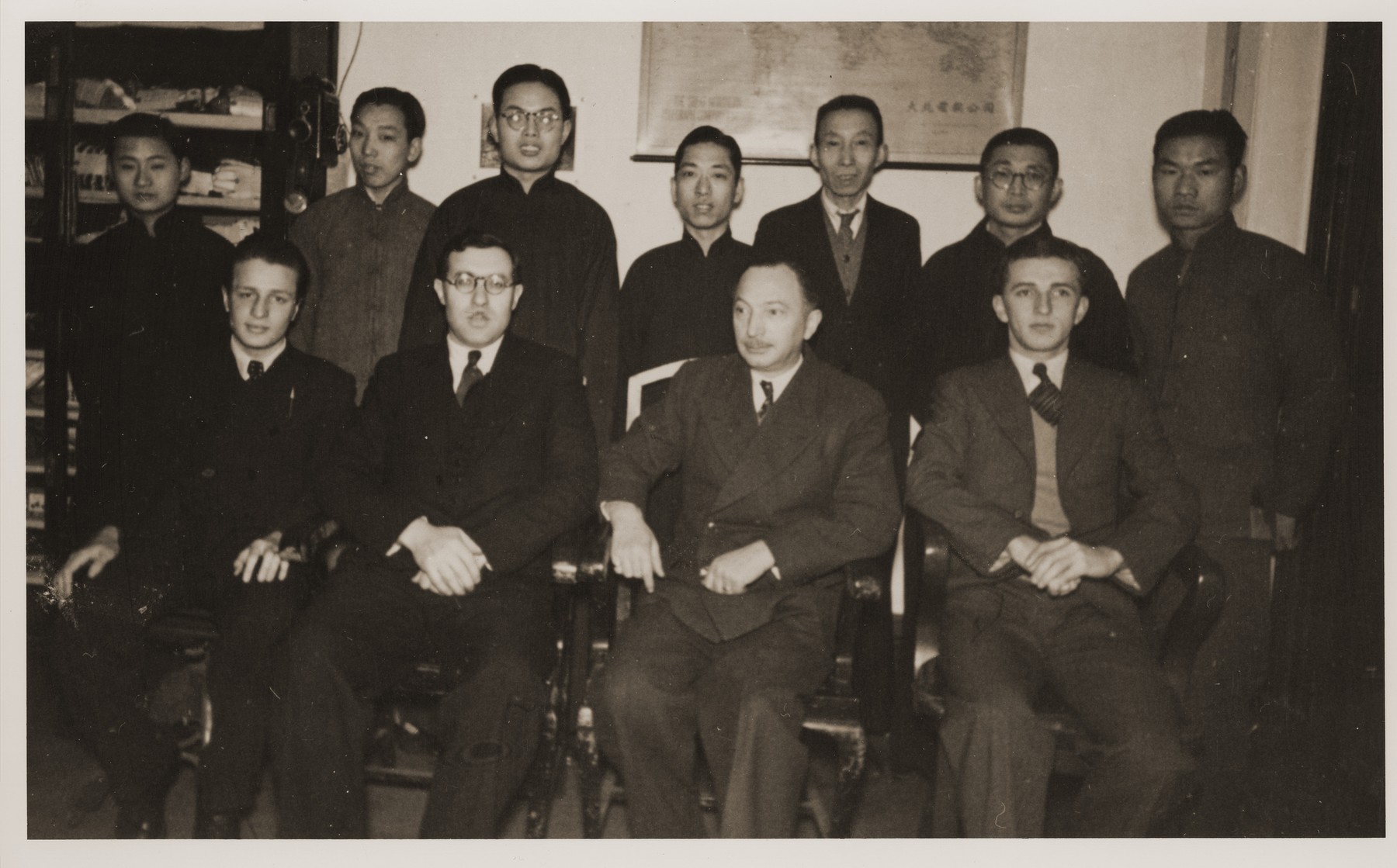 Group portrait of the staff of the International Committee for European Immigrants in China.

Paul Komor is seated second from the right; Eric Goldstaub is seated first on the left.

https://encyclopedia.ushmm.org/content/en/article/german-and-austrian-jewish-refugees-in-shanghai.
Biography
Paul Komor (1886-1973), Honorary Consul for Hungary in Shanghai who co-founded the International Committee for European Immigrants. Paul was the eldest child of Isidor and Frieda (Abeles) Komor and the grandson of Salomon Kohn, a Hungarian Jew who officially "Magyarized" the family name in 1881. Born in Budapest, Paul moved with his parents to the Far East in 1896, when his father decided to join his uncle Siegfried Komor in a Japanese curio business in Hong Kong. The following year the family moved to Yokohama, where Isidor Komor and his cousin Arthur Kuhn established "Kuhn and Komor," a branch of the Hong Kong firm. In April 1898 the family settled in Shanghai, where they opened a second branch of the business. Paul was educated at the German language Kaiser Wilhelm Schule in Shanghai. In 1915 at the age of nineteen, Paul married Adele Rogalsky, the daughter of a Jewish family from the Crimea, who had come to Shanghai from Harbin in 1912. Their first son, Leonard Andrew, was born in 1917 and their second, Peter Sandor, in 1921. In March 1919 when all "enemy" nationals were forced to leave Shanghai, Paul and his father were repatriated by the British to Hamburg, Germany. The following January Paul returned to Shanghai. (His father rejoined him only in 1933 after the death of Paul's mother.) In 1924 Paul was baptized in the German Evangelical Church in Shanghai together with his wife and children. Paul's business career began with the management of a tannery in Shanghai. Subsequently, he ran the China Import Company with his brother-in-law. A staunch Hungarian patriot, Paul Komor was named Honorary Consul General for Hungary in Shanghai in the 1930s. During the summer of 1938 he was approached by business associates of Sir Victor Sassoon, a wealthy Iraqi Jew with British citizenship, to head a committee that would be underwritten by Sassoon, to deal with the wave of Jewish refugees arriving in Shanghai from Nazi Germany. Together with Eduard Kann, Aladair Kelen and Michael Speelman, Komor established the International Committee for European Immigrants in China on August 7, 1938. It was referred to as the I.C. or Komor Committee. Komor headed the committee until his sudden arrest by Japanese naval intelligence in January 1942 at I.C. headquarters in the Cathay Hotel. Apparently, he was suspected of being a British spy because of his close association with Sir Victor Sassoon. Komor remained in custody in a room at the hotel until March, when he was abruptly released. Although the Japanese prohibited him from returning to the I.C., the committee continued to function for some time. Komor remained in Shanghai until April 1948 when he immigrated to the United States. He settled with his wife in Santa Cruz, California, where he lived out the rest of his life.

Eric Goldstaub is the only child of Adolf and Camilla Fiedler Goldstaub. His father owned a sewing accessories business in Vienna, Austria. Born on November 14, 1921, Eric grew up in Vienna and attended the Grinzig gymnasium, where he was one of two Jewish students in his class. Both Eric and his father were involved in athletics. Adolf was a member of a gymnastics association and the Maccabi Jewish sports organization. Soon after the Anschluss Eric was among a group of Viennese Jews rounded up by Austrian police and SA members and forced to scrub streets in the seventeenth and eighteen districts of the capital. Following this incident Eric made every effort to secure visas for his family to leave Austria. After visiting every consulate in Vienna, Eric went to the Chinese embassy, where he was among the first Austrian Jews to receive Chinese visas. He succeeded in getting twenty visas for members of his immediate and extended family, including the parents of Harry Fiedler. On Kristallnacht Eric's father was arrested and held for a couple of days, and his store looted. Eric was detained at his school by members of the SA and allowed to leave only after producing his visas and ship tickets. On November 13 the entire family left together for Genoa. They sailed aboard the Conte Bianca with several hundred other Viennese Jewish refugees, arriving in Shanghai in mid-December. The family settled in the Embankment building owned by Sir Victor Sassoon. Following the Japanese occupation, the family moved to quarters in Hongkew. Eric found employment in the import/export firm run by Paul Komor, the former Hungarian consul to Shanghai. Komor, who also headed the International Committee for Refugees, utilized Eric and his other employees in its operations. In addition to these activities, Eric organized a dancing school in the ghetto and was a leading member of the Jewish soccer league. Eric remained in Shanghai until 1949, leaving one week before the communist takeover. He sailed to Canada in the summer of 1949 and settled permanently in Toronto.