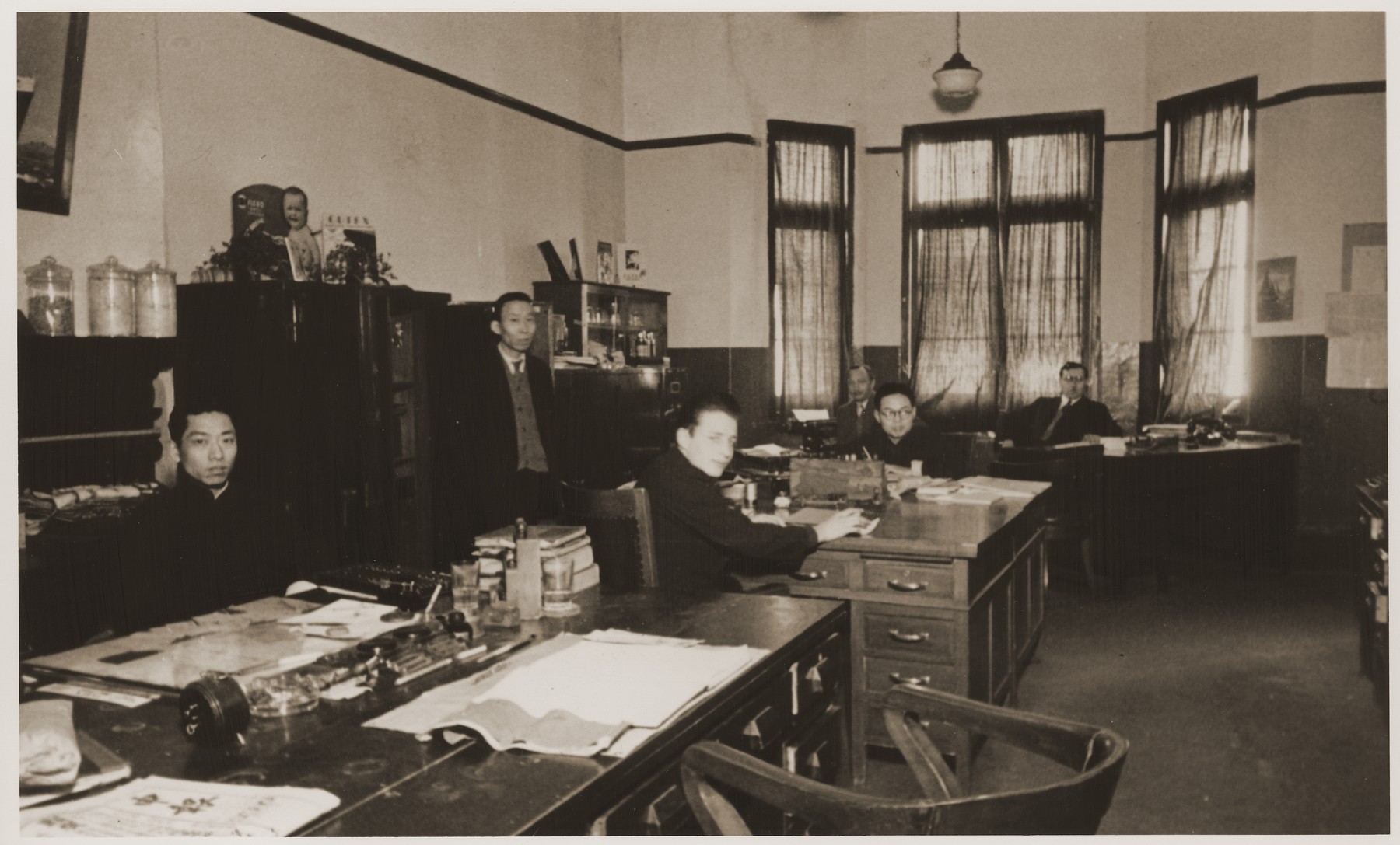 Among those pictured is Eric Goldstaub (seated in the center). Pictured seated at the desks in the back are Paul Komor, co-founder of the International Committee for European Immigrants in China, and his brother-in-law, Jack Rogalsky (right, wearing glasses). Mr. Rogalsky immigrated with his wife and daughter to Toronto in 1949, and died in 1974.

[Sources: Komor, Valerie S., "Paul Komor, 1886 Budapest, Hungary -1973 Santa Cruz, California" [unpublished biographical sketch of Paul Komor], New York, N.Y., 2000; Vamos, Peter. "Central and Eastern European Jewish Refugees in Shanghai, 1938-1948' [unpublished paper] U.S. Holocaust Memorial Museum, Washington, DC, 2001.]
https://encyclopedia.ushmm.org/content/en/article/german-and-austrian-jewish-refugees-in-shanghai.
Biography
Eric Goldstaub is the only child of Adolf and Camilla Fiedler Goldstaub. His father owned a sewing accessories business in Vienna, Austria. Born on November 14, 1921, Eric grew up in Vienna and attended the Grinzig gymnasium, where he was one of two Jewish students in his class. Both Eric and his father were involved in athletics. Adolf was a member of a gymnastics association and the Maccabi Jewish sports organization. Soon after the Anschluss Eric was among a group of Viennese Jews rounded up by Austrian police and SA members and forced to scrub streets in the seventeenth and eighteen districts of the capital. Following this incident Eric made every effort to secure visas for his family to leave Austria. After visiting every consulate in Vienna, Eric went to the Chinese embassy, where he was among the first Austrian Jews to receive Chinese visas. He succeeded in getting twenty visas for members of his immediate and extended family, including the parents of Harry Fiedler. On Kristallnacht Eric's father was arrested and held for a couple of days, and his store looted. Eric was detained at his school by members of the SA and allowed to leave only after producing his visas and ship tickets. On November 13 the entire family left together for Genoa. They sailed aboard the Conte Bianca with several hundred other Viennese Jewish refugees, arriving in Shanghai in mid-December. The family settled in the Embankment building owned by Sir Victor Sassoon. Following the Japanese occupation, the family moved to quarters in Hongkew. Eric found employment in the import/export firm run by Paul Komor, the former Hungarian consul to Shanghai. Komor, who also headed the International Committee for Refugees, utilized Eric and his other employees in its operations. In addition to these activities, Eric organized a dancing school in the ghetto and was a leading member of the Jewish soccer league. Eric remained in Shanghai until 1949, leaving one week before the communist takeover. He sailed to Canada in the summer of 1949 and settled permanently in Toronto.