Portrait of a Jewish youth wearing shorts in the Bedzin ghetto. 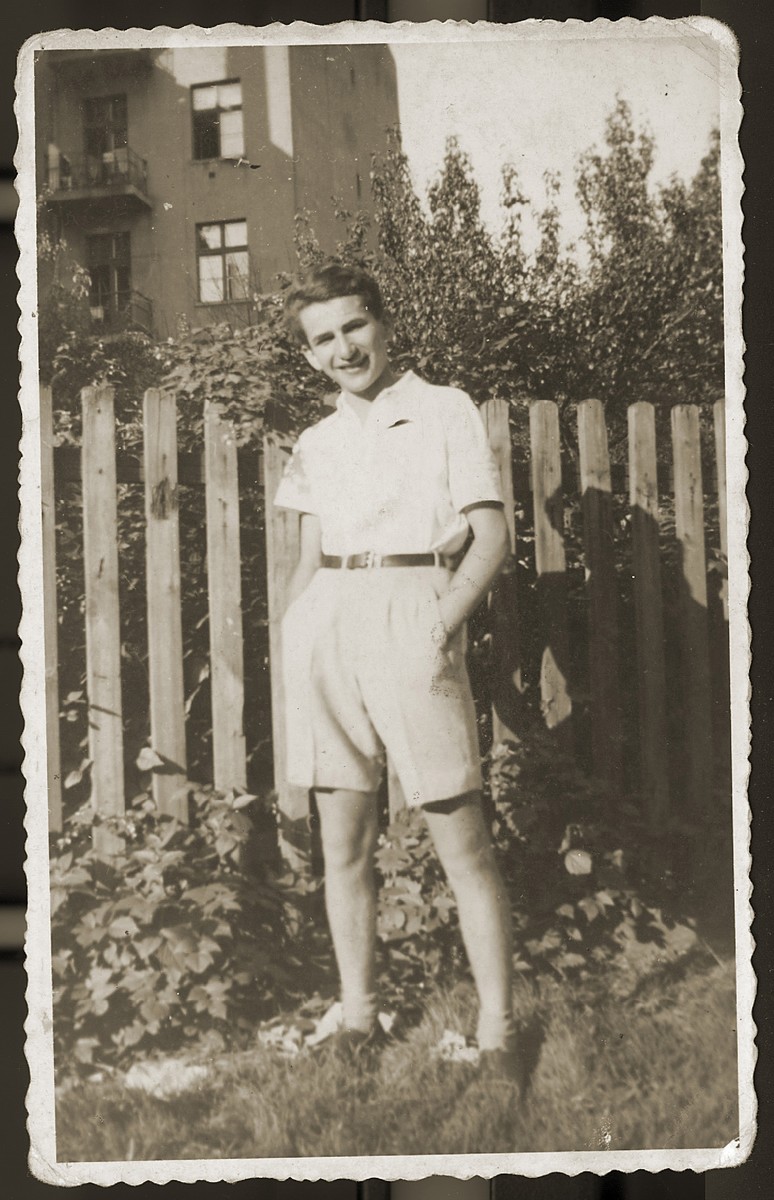 Portrait of a Jewish youth wearing shorts in the Bedzin ghetto.

Pictured is Zygmunt Pluznik. Pluznik gave this photo to his friend, Idziek Gold, before Idziek departed Bedzin for the Ilag Tittmoning international camp. Pluznik inscribed his picture, "To my dear Idziek on the last days of our friendship." The photo bears the stamp of Ilag Tittmoning, where all personal possessions were registered and stamped upon arrival.

His mother, Dora Pluznik, and his two sisters, Mania and Rozia, were deported and killed in Auschwitz in August 1943, as were Rozia's husband and daughter.

https://encyclopedia.ushmm.org/content/en/article/german-administration-of-poland. https://encyclopedia.ushmm.org/content/en/article/ghettos-in-poland.
Biography
Zygmunt Pluznik is the son of Dora (Rynska) and Szaja Pluznik. He was born October 4, 1924 in Bedzin. Zygmunt had two sisters, Mania (b. 1922) and Rozia (b. 1918). Zygmunt and his sisters attended the Furstenberg gymnasium in Bedzin. He was a member of the Hanoar Hatzioni Zionist youth movement from an early age. During the German occupation of Poland, Zygmunt's father was deported to a labor camp in January 1941. Zygmunt and his friends in Hanoar Hatzioni engaged in underground activity. The organization helped a few of its members to acquire false papers and instructed them to volunteer for labor in Germany. The group of 20 young Jews was supposed to leave for Germany on August 3, 1943, but the Germans started to liquidate the ghetto two days earlier. Zygmunt's mother, sister Mania, sister Rozia, and Rozia's husband and child were all deported to their death in Auschwitz. Zygmunt and some of his friends escaped from the ghetto to the Durchlager (transit camp) in Sosnowiec. Following the liquidation, they were sent to clean out the ghetto. In October 1943 Zygmunt and his group traveled on their false papers to Vienna and volunteered for agricultural work. The group included Zygmunt Pluznik, Tobka Gutman, Karola Bojm, Karol Tuchsznajder, Jozek Sztajnfeld, Rutka Judenherc, Mietek Sztajnhart, Manius Diamant, Sara Bergman and the Oksenhendler couple. The head of the Hanoar Hatzioni in Bedzin, Leon Blatt, remained in close contact with them, and on March 5, 1944, he ordered them to cross the border into Hungary. The group was arrested by the Hungarian police and jailed for two weeks. On March 19, 1944 Germany invaded Hungary and kept all prisoners in jail. After many attempts to escape, they finally succeeded in August 1944. With white uniforms supplied by Leon Blatt, the prisoners posed as members of a German tennis team and were able to cross the border into Romania. After making their way to Constanta, the group secured passage on a Turkish boat, called the Bulbul, for Istanbul. Zygmunt and his friends arrived in Tel Aviv on August 21, 1944. He was reunited with his father, Szaja, in 1945.