Group portrait of students from the Beit Yaakov, religious school for girls in Bedzin at the "Bnot Agudat Yisrael" (Agudat Yisrael girls) summer camp in Kaminsk. 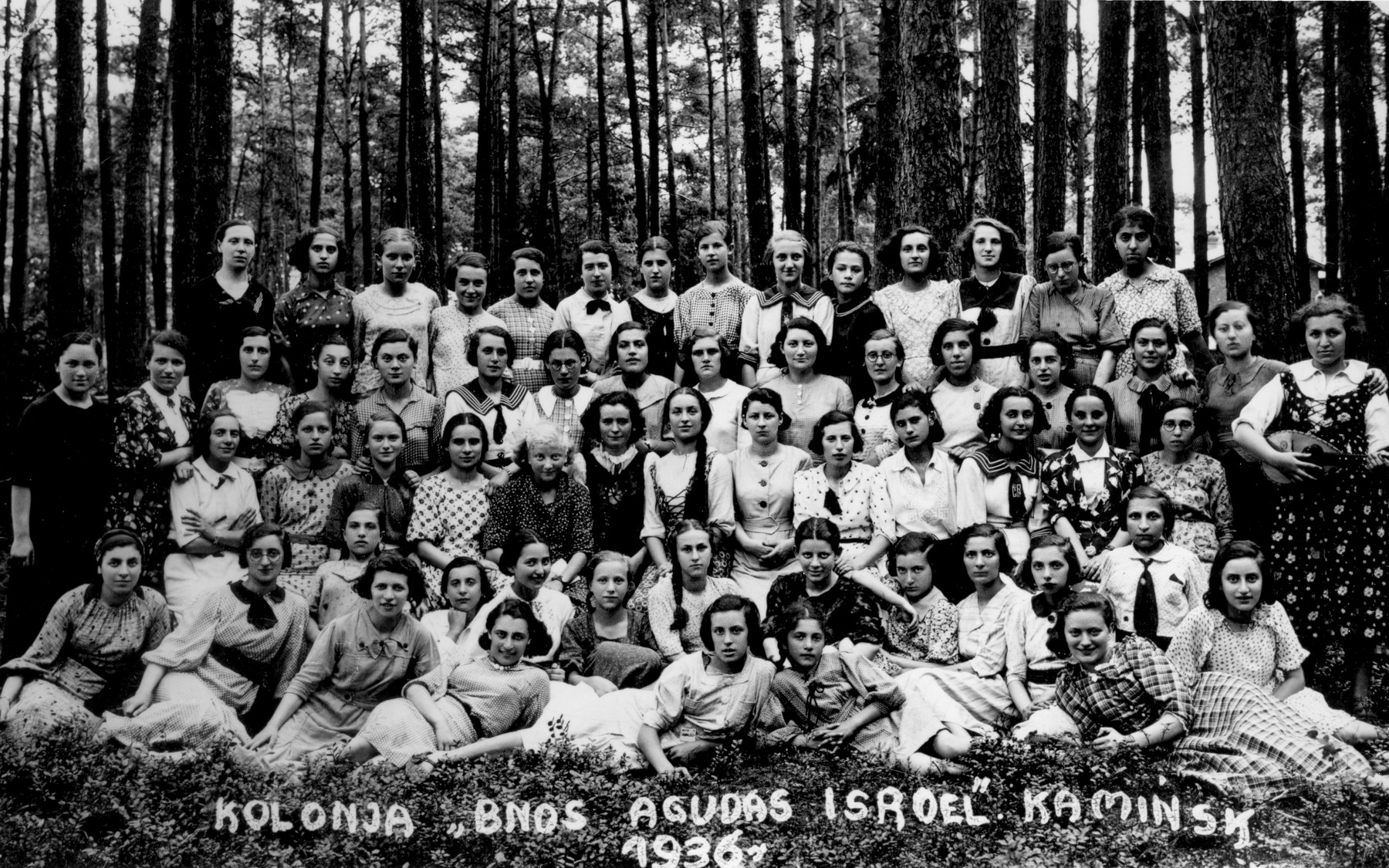 Group portrait of students from the Beit Yaakov, religious school for girls in Bedzin at the "Bnot Agudat Yisrael" (Agudat Yisrael girls) summer camp in Kaminsk.

Among those pictured is Machela Cukierman (front row, second from the left) and Hadasa Broder (third row from the front, fourth from the left).

Biography
Nahum and Dina Kohn lived in Sosnowiec, Poland, where they owned and operated a women's apparel shop on Modrzejowska Street. The Kohns had at least five children, including Majer and four younger sisters. The family generally spent their holidays in the resort town of Krynica. In the early 1930s Majer Kohn married Bronka Broder (b. 1909), the oldest daughter of Mendel and Fajga (Erlich) Broder. She grew up in Bedzin where her parents owned a tobacco and stationery shop on Malachowski Street. Bronka's grandparents were Symcha Bunim and Judit (Zyskind) Broder on her father's side, and Szlomo Majer and Szajndl Erlich on her mother's side. Bronka had five siblings: Lejb (b. 1912), who married Fajga Rypsztajn c. 1939-40; Eli Aron (b. 1915), who married in 1937; Hadasa or Hutka (b. 1917), who married Dawid Szlezyngier in 1941 and gave birth to a son Majer in 1942; Hanoch (b. 1920); and Judit or Itka (b. 1922). Bronka and Majer Kohn had two children: Dawid (b. 1934) and Renia (b. 1935). The Kohn-Broders were orthodox Jews whose children attended religious schools in Bedzin. However, as Eli Aron Broder grew up, he was attracted by more secular pursuits such as cycling. When he married a woman of lesser social standing whose brothers were communists, his parents refused to accept the marriage. After the German invasion of Poland, Eli and his wife escaped on bicycles to the Soviet occupied sector and then crossed the border on foot into the Soviet Union. When he had settled down he wrote to his parents in Bedzin urging them to send his youngest sister to him, but they insisted that everything was fine where they were. In 1941 Nahum and Majer Kohn were hanged publicly in the market square in Sosnowiec, ostensibly for violating some economic restriction. Lejb Broder was shot by members of the SS during a deportation action in the ghetto that took place June 22-26, 1943. Dawid Szlezyngier was deported to a labor camp where he was killed. The other members of the extended family were deported to Auschwitz. None returned. Eli Broder was the only family member to survive. After the war he immigrated to Israel.