Jewish men at work in a sausage factory in Dabrowa Gornicza, Poland. 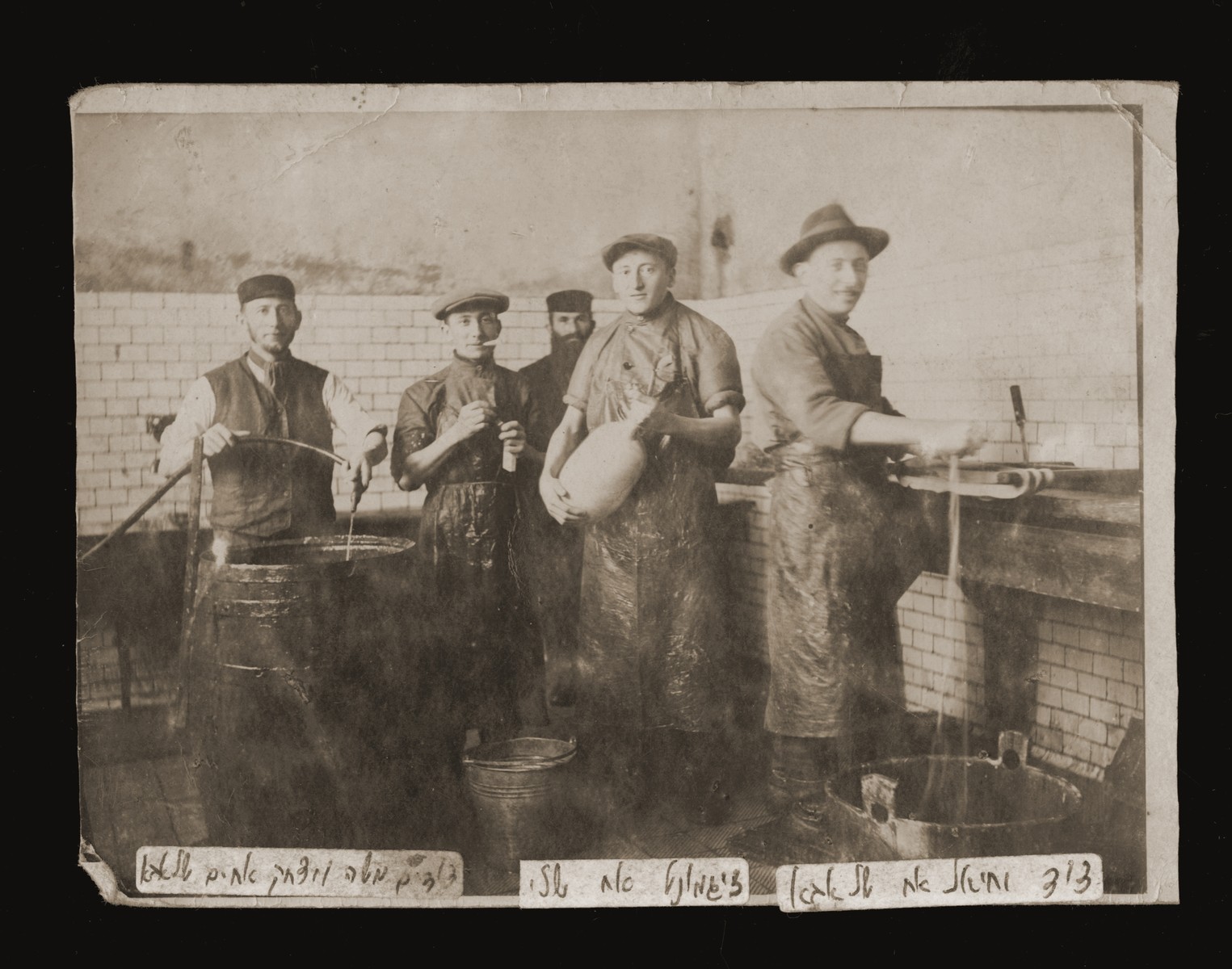 Jewish men at work in a sausage factory in Dabrowa Gornicza, Poland.

Biography
Zevik Malach is the son of Rafuel and Hana (Wilder) Malach and the grandson of Welwel Benjamin and Dwora Malach. He had one brother, Amos. Zevik's father immigrated to Palestine from Bedzin in 1935 with his brother Zyshe. In 1938 Zyshe and his family decided to return to Poland, where they were all killed during the war.

Yehudit Malach (born Itka Feder) is the daughter of Abraham Yitzhak and Ester Rojza (Bajtner) Feder. She was born on June 6, 1919 in Dabrowa where her father had an alcohol concession. Itka had five older siblings: Mosze (b. 1913), Lejbl (b. 1914), Szrage (b. 1915), Rachel (b. 1916) and Yehiel (b. 1918). Szrage and Rachel immigrated to Palestine before the war. Yehiel survived the Auschwitz and Mauthausen concentration camps. Itka's father perished in the ghetto, and her mother in Auschwitz. Itka married Velvel Malach, the son of Zisha and Refael Hirsch Malach, and after the war immigrated to Israel.

Aron Josef and Chana Pesia Malach moved from Makow Mazowiecki, Poland to Bedzin in 1905 with their eight sons: Yankel Dawid, Rafuel Hirsh, Welwel Benjamin, Abba, Yitzhak Mordechai, Yehiel, Mosze Pinchas, and Lajb. They settled near the city slaughterhouse. Chana Pesia died during the interwar period, and Aron Josef was killed during World War II under unknown circumstances. Three of their sons established a factory in Bedzin, which produced sausage skins (kischke) for non-kosher sausage makers. The fourth son, Welwel, bought cattle blood from the slaughterhouse and sold it to factories for the production of glue. Two of the sons left for Palestine in the 1930s, though one of them returned in 1939 for professional reasons. Rafuel Hirsh married his cousin Malka Ruchel Blum and moved to Dabrowa Gornicza, where he established another sausage skin factory. When this enterprise failed, he moved back to Bedzin to rejoin the family business. Rafuel Hirsh and Malka had seven children: Yitzhak, Zyshe, Frymet, Syma, Estera, Wolf and Avraham. All seven children became involved in political organizations. Yitzhak and Zyshe were communists, Estera was a member of the Hashomer Hatzair Zionist youth movement, Frymet belonged to the Gordonia Zionist youth group, Syma joined the Jewish socialist Bund and Wolf, the Hashomer Hadati Zionist youth organization. Yitzhak Malach married Sara Ruda in 1934 and moved to her home in Bedzin. Their son Avraham was born in 1937. Sara's family was from Warsaw, where her father owned a fish store in the Jewish quarter. In Bedzin, Sara worked as a midwife at the Bikur Cholim Jewish hospital. Wolf Malach worked first in a textile shop and later at his uncle's printing establishment. He married a woman named Itka shortly after the war began in 1939. They soon fled to the Soviet Union, and continued to move eastward as the German army advanced. They settled ultimately in Tasch-Kumr in Siberia, where Wolf worked in a coal mine. Syma Malach and her husband, Dawid Krauze, were forced to flee from Dabrowa Gornicza in 1937 because of Dawid's illegal activity in the communist party. They lived illegally in France for two years until they were expelled shortly before the war. They, too, fled to the Soviet Union. Syma died in Samarkand in 1943 (in the presence of Wolf, who had traveled from Tasch-Kumr to see her) as a result of an ectopic pregnancy. Zyshe Malach likewise fled to the Soviet Union in 1939. Yitzhak Malach remained with his family in Bedzin during the occupation. The last two family photographs were taken in 1942 on their eighth wedding anniversary. None of them survived. Wolf and Itka Malach returned to Poland in 1946, where they were reunited with Zyshe. However, it was soon apparent that they were the only survivors of their extended family of 178 members. With the support of the Bricha, Wolf and Itka escaped from Poland and immigrated to Palestine. Zyshe followed reluctantly a few years later and died in Israel in 1985. Wolf and Itka continue to live in Herzlia.