An American soldier stands guard outside the prison where the defendants were held during the International Military Tribunal trial of war criminals at Nuremberg. 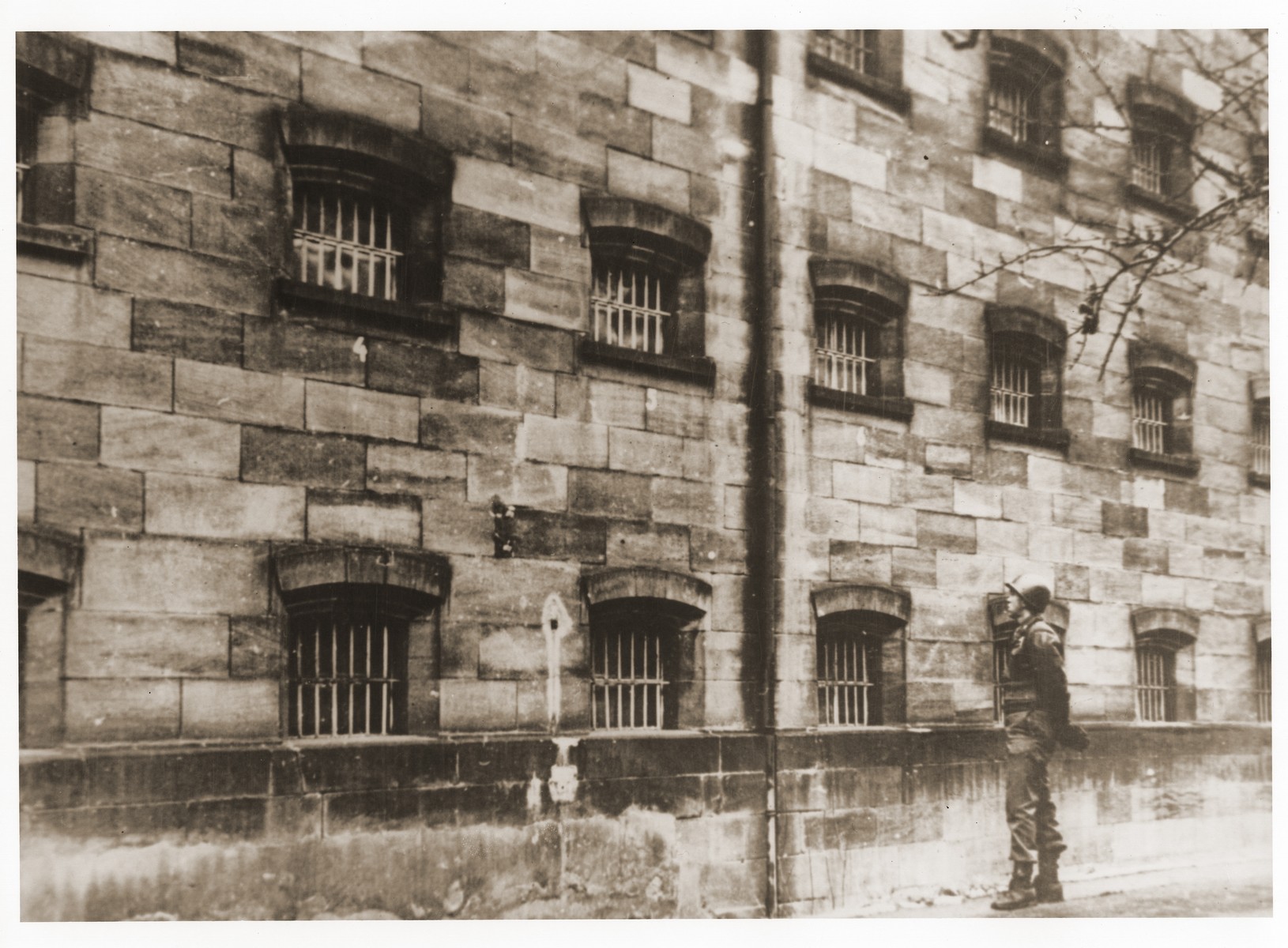 An American soldier stands guard outside the prison where the defendants were held during the International Military Tribunal trial of war criminals at Nuremberg.

https://encyclopedia.ushmm.org/content/en/article/international-military-tribunal-at-nuremberg.
Biography
Yevgeny Khaldei (1917-1997), Russian photographer of Jewish origin, who became a renown photo journalist during World War II, covering the war from Murmansk to Sevastopol and from Moscow to Berlin. Born to a Jewish family living in Yuzovka (later Stalino and Donetsk) Ukraine, Khaldei lost his mother during a pogrom that took place in his hometown when he was one year old. She died trying to shield him, and the bullet that killed her lodged in his chest. Following her death the family moved in with Khaldei's grandparents in Stalino. After completing only four grades of elementary school, Khaldei was forced to leave school in 1930 in order to get work to help feed the family during the great Ukrainian famine. Lying about his age, he got a job in the railroad shop of a steel factory. Even before leaving school Khaldei had developed an interest in photography from his exposure to the new illustrated Soviet magazines. His first camera was one he built himself in 1932 out of a cardboard box and a pair of eyeglasses, following a diagram he found in a magazine. The next year he got his first real camera, a Soviet-made Leica, which he acquired as a prize for depositing money in a local bank. With his new camera Khaldei began taking pictures, which appeared first in his factory newspaper and later in city and district publications. In those years the young photographer took pictures celebrating factory workers and agricultural laborers on the new collective farms. In 1935 Khaldei was invited to Moscow to take a professional photography course offered by Fotokhronika of Soyuzfoto (which later became the TASS wire service). There, he studied with such leading photographers as Semyon Fridlyand, Arkady Shaikhet and Max Alpert. After completing the course Khaldei returned to Stalino. Though he was promised a job with Fotokhronika, it was another year before he could find housing and secure a residence permit that would allow him to move to Moscow and take up his position. Khaldei ultimately moved in with a Jewish tailor named Israil Solomonovich Kishitser, a friend of his father, who would later sew the three flags that Khaldei photographed hanging in Berlin in 1945. His career as a photo journalist for Fotokhronika/Tass was put on hold in 1937 when he was drafted and sent to the Finnish border, but he returned to the wire service immediately after he was demobilized in the fall of 1939. In the first year of World War II Khaldei covered the Soviet occupation of eastern Poland and the expulsion of Polish refugees by the NKVD (secret police) to the Soviet interior. The photographer was in Moscow when news arrived of the German invasion of the Soviet Union on June 21, 1941. Immediately he was sent to the Murmansk front. Though officially a navy lieutenant, Khaldei was not involved in combat during the war. He enjoyed a high level of independence in deciding where to travel (within a general area) and what to photograph, and for the first time in his career, was free of the restraints imposed by Soviet socialist realism. While Khaldei was still in the north, the Germans overran his hometown of Stalino in October 1941 and murdered its Jewish population, including all of Khaldei's family. From Murmansk, Khaldei followed the Red Army south to the Crimean ports of Sevastopol and Kerch, covering the fighting there from the winter of 1943 to the spring of 1944. In the fall of 1944 Khaldei accompanied the Red Army on its march into Europe and covered the liberation of all the major capitals, Bucharest, Belgrade, Budapest, Vienna and Berlin. It was Khaldei who set up and took the famous photograph of Red Army soldiers hanging the Soviet flag over the burning Reichstag on May 2, 1945. After the German surrender Khaldei, who had become something of a court photographer for Stalin, covered the Potsdam conference, and later the International Military Tribunal at Nuremberg. In October 1945 Khaldei married his girlfriend Svetlana, who had worked in the photography department at the Sovinformburo during the war. Soon after they had two children, Anna and Leonid. Khaldei's privileged status ended abruptly in 1948 with the onset of Stalin's anti-cosmopolitan campaign that targeted prominent Jews in a wide range of fields. For the next ten years he eked out a living doing film development work. His situation began to improve only after the death of Stalin in 1953. In 1959 Khaldei was hired by the leading Soviet newspaper, Pravda. He continued to work there until 1976, when he was forced out by a new wave of anti-Semitism. It was not until 1995 that Khaldei began to get world recognition for his wartime photography. Exhibitions of his work were mounted in Berlin and New York and his pictures were reprinted in anniversary issues of magazines throughout Europe.