Two Jewish refugee children in their cell in the Pristina prison, where they were detained with their families by the Italians for eight months. 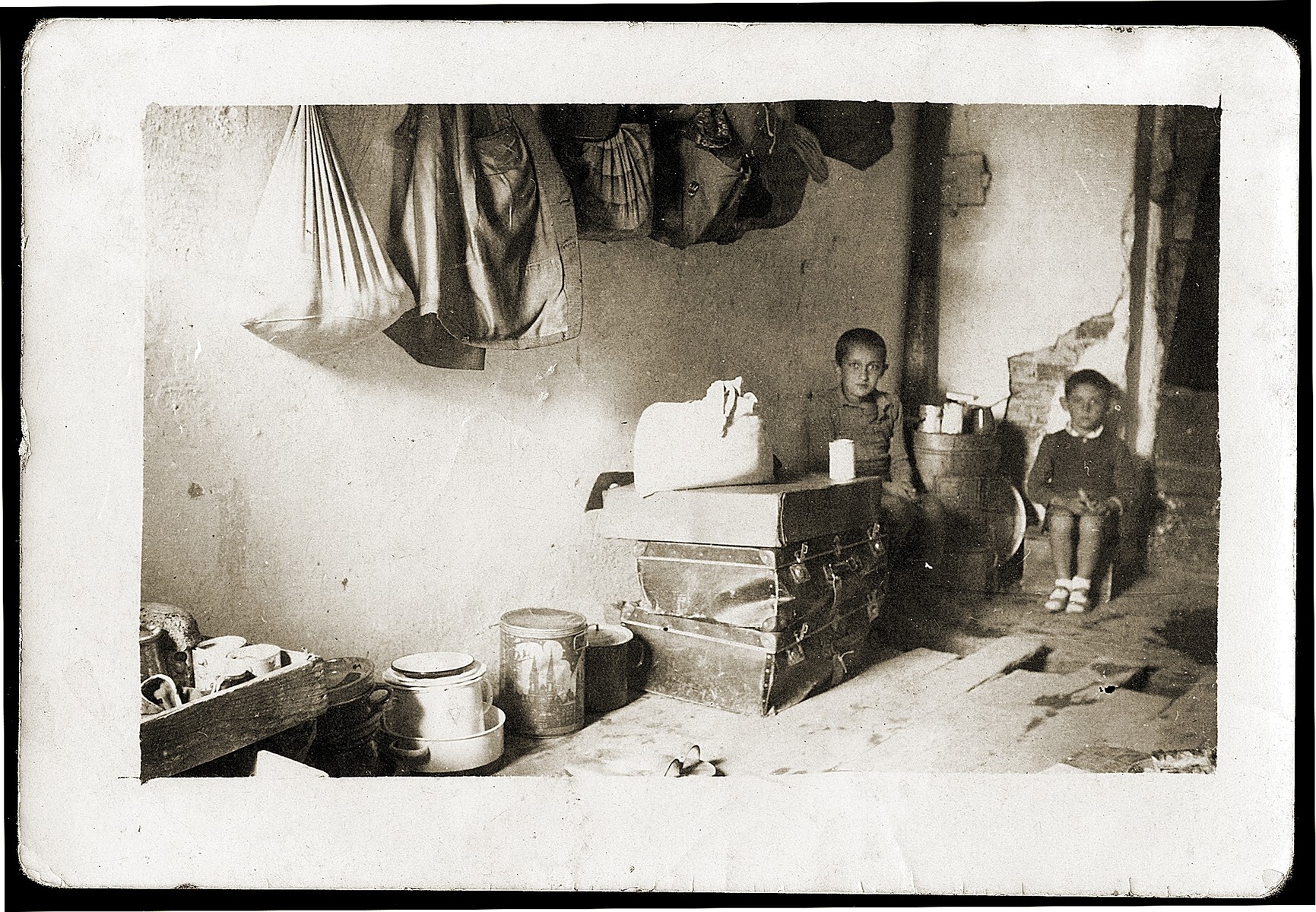 Two Jewish refugee children in their cell in the Pristina prison, where they were detained with their families by the Italians for eight months.

Photographer
Mosa Mandil
Date
Circa May 1942

Event History
"Bloody Wednesday" was the reprisal action in Olkusz initiated by German police units in response to the shooting of the German police officer Ernest Kaddatz by an unknown assailant on July 16, 1940. On the night of July 30, 1940, SD and police units converged on the city of Olkusz and systematically rounded-up all Jewish males in the city aged roughly from 14 to 55 years old. Those arrested were collected at three points in the city: on the Czarna Gora green, at the local power plant, and in the old market square. They were made to lie face down for hours with their hands tied behind their backs and were beaten mercilessly by the arresting Germans until around 3 p.m. when they were all released, with the exception of 21 Jewish men who were publicly executed. According to Ernst Klee, units of the Wehrmacht also participated in the reprisal. However, no German regular army soldiers appear in any of the photographs held by the Museum.
Biography
Gavra Mandil is the son of Mosa and Gabriela (Konfino) Mandil. He was born September 6, 1936 in Belgrade. Two years later the family moved to Novi Sad, where his father opened a photo studio. (Gavra's maternal grandfather, Gavra Konfino, had been the royal photographer of King Alexander in Belgrade). Gavra had one sister, Irena, who was two years younger. After the German invasion in April 1941, the family fled south to the Italian-controlled province of Kosovo. The Mandils were imprisoned along with several other Jewish families in the city of Pristina, where they remained for ten months. While in prison Gavra's father ingratiated himself to his Italian captors by volunteering to take their pictures. After being incarcerated for some time the Jewish families complained about the overcrowded prison conditions. Their complaints were conveyed by Italian prison officials to their German allies, who in response, executed half of the prisoners. Fearful that the others would also be killed, Mosa appealed to the Italians whom he had befriended to save the remaining Jews. The Italians obliged by transferring the prisoners by truck to Albania, where they were given limited freedom. The Mandil family was directed to the town of Kavaja, where they lived in relative safety until the summer of 1943. Following the Italian capitulation and the German incursion into Albania, the Mandils moved to Tirana, hoping to find safety in numbers in the capital city. Gavra's father found work in the photography studio of Neshed Ismail, an Albanian who had worked for Gavra's grandfather in Belgrade. Also employed in this studio was a sixteen-year-old Albanian apprentice named Refik Veseli. In the fall of 1943, sensing the growing danger for Jewish refugees living in the capital, Refik sought his parents' permission to hide the Mandil family (along with their cousins, the Ben-Yosif family) in their home in the mountain village of Kruja. From November 1943 until the liberation in October 1944, the Mandils were sheltered by the Veseli family. Seven-year-old Gavra and his five-year-old sister, Irena, lived openly as Muslim villagers during this period, but their parents had to remain hidden during the day in a room above the Veseli's barn. After the war the Mandils returned to Novi Sad, where they re-opened their photo studio. In 1946 Refik Veseli joined the family in Novi Sad and completed his professional training with Gavra's father. In 1948, after the consolidation of the communist regime in Yugoslavia and the founding of the Jewish State, the Mandils decided to emigrate to Israel. Refik expressed a strong desire to go with them, but ultimately chose to return to his family in Albania. Refik was recognized by Yad Vashem as one of the Righteous Among the Nations in 1990.