Members of the extended Hochberg family gather around a table during the celebration of the bar mitzvah of Sigmund Hochberg. 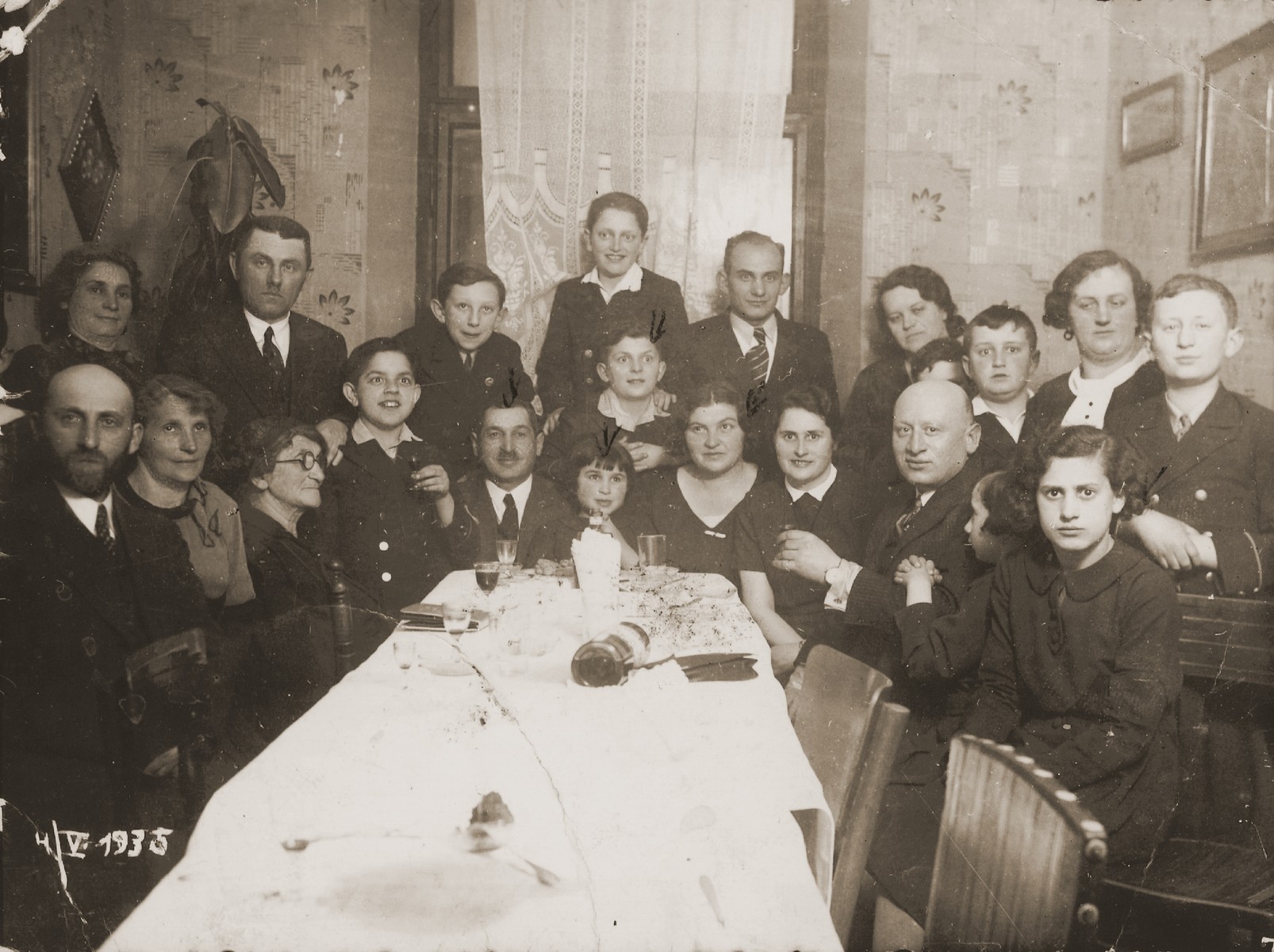 Members of the extended Hochberg family gather around a table during the celebration of the bar mitzvah of Sigmund Hochberg.

Pictured at the head of the table are Bernard and Dina Hochberg with their children Sigmund and Eugenia. Rachel Katz is seated at the far right. Only Eugenia and her cousin Rachel survived the war.

The donor, Eugenia Hochberg (b. November 27, 1928), is the daughter of Bernard and Diana Harmelin Hochberg of Brody, Poland. She had one brother, Sigmund (b. 1922). Her father earned his living as a grain shipper. Eugenia attended a private non-religious Jewish school in Brody. After the German invasion and the repartition of Poland in the fall of 1939, Brody came under Soviet occupation. For two years the Hochbergs remained in their home, but were compelled to share their living quarters with other Jewish families. No longer permitted to run his own business, Bernard was forced to take work as a night watchman. In June 1941, following the German invasion of the Soviet Union, Brody fell under Nazi domination. On November 27, 1941 Bernard was deported to a labor/concentration camp in Zborow, where he remained for five months until his wife could purchase his freedom and bring him home. The Hochbergs relocated to the ghetto after its establishment in the winter of 1942. During this period Eugenia was sent for forced labor to various sites outside the ghetto. She also performed secretarial tasks in the offices of the Judenrat. The family was rounded-up during the final liquidation of the Brody ghetto on May 21, 1943. While on the deportation train to Majdanek, Eugenia's parents forced her to jump off before they reached their destination. Eugenia was found semi-conscious by Polish peasants who stole her clothing and were about to take her to the police, when a railway worker appeared and insisted on taking her himself. Instead of turning her in, however, he offered her temporary shelter and found clothes for her to wear. Eugenia found her way back to Brody, where she smuggled herself into the forced labor camp. Several weeks later she smuggled herself back out and found refuge with a Polish woman, who harbored other Jews for payment. Eugenia narrowly escaped capture by the Gestapo during a raid of her place of refuge in February 1944. Though she was able to find a Russian woman to take her in, Eugenia had to spend the last six weeks of the war concealed in a hole under the woman's bed. Following her liberation in March 1944, Eugenia lived for a time in Brody and Lublin. She married Henryk Lanceter in July 1945, and five months later left for Germany. The couple took up residence in the Finkenschlag DP camp in Fuerth, where their daughter was born. In the summer of 1949 the family emigrated to the United States, sailing aboard the SS General Holbrook to Boston.

Biography
Henryk Sigmund Lanceter was the son of Aron and Ella (Chineser) Lanceter. He was born in 1919 in Brody, Poland, where his father was a teacher at a Jewish school, and subsequently, the owner of a small notions store. Henryk had one brother, Samuel (b. 1913). The Lanceter children were brought up in a traditional Jewish home. Henryk attended a private Jewish school until the fourth grade. He then moved to a Polish public school, and finally to a commercial high school. After his graduation in 1937, Henryk obtained a job in a wholesale food business. Following the outbreak of World War II, Henryk remained in Brody. When the Soviets took control of the city, the food company Henryk worked for was nationalized, but he continued in his job. In October 1940 he was drafted into the Soviet army and sent to officers training school in Czkalov, followed by deployment in the Urals. The rest of his family remained in Brody. They were subsequently deported to their death in Belzec in September 1942. As a Polish exile in the Soviet Union, Henryk was offered the opportunity of joining the Anders Army in 1942, but he refused when he was told he would have to renounce his Jewish identity. Henryk was then detained and sent to a series of labor camps, including ones in Uzbekistan and Mongolia. In January 1944 Henryk was released and allowed to join the new Polish, communist, Berling Army, which was then forming in the Soviet Union. He fought with the new army as it advanced westward with the Red Army to liberate Eastern and East-Central Europe. He participated in the liberation of Warsaw, Lublin (including Majdanek) and Prague. In the spring of 1945 his unit reached Berlin, where he joined in the liberation of Oranienburg. Following the German surrender, Henryk was sent to Lublin, where he worked in an administrative post for the Polish army. In June he met Eugenia Lanceter, a Jewish survivor from his hometown of Brody. Two weeks later, on July 19, 1945, they were wed. Eugenia insisted that they leave Poland, and in the fall they fled westward, not having a precise destination. When they reached Katowice they were advised to head for Germany rather than Italy. More specifically, they were told to travel to Berlin and there seek the help of a Polish Jew named Seiden, who had made it rich as a businessman in interwar Berlin. Seiden, who had vowed that if he were to survive, he would dedicate himself to helping other Jews in need, owned a hotel in Berlin-Charlottenburg, which was returned to him after the war. When the Lanceters arrived in Berlin and contacted Seiden, he provided them with a room at his hotel. The couple only remained a short time in Berlin before smuggling themselves into the American sector of Germany on New Year's Eve. The Lanceters stayed briefly in Munich and the Foehrenwald displaced persons camp before settling down in the Finkenschlag DP camp in Fuerth in March 1946. There, Henryk was given a position in the camp administration managing supplies. Their daughter Dina was born August 16, 1946. Approximately two years later, Henryk and Eugenia moved into the town of Fuerth, where Henryk worked as an administrator and accountant for the Jewish community. The family remained there until April 1949, when they moved to the Wildflecken transit camp. The Lanceters left Germany for the U.S. on the General Holbrook in June 1949. After arriving in Boston, they settled in Brooklyn, N.Y., where their second child, Arnold Bernard, was born on March 14, 1950.