A postcard from Sobibor written by Alice Elbert, a Slovak Jew imprisoned in the Luta forced labor camp near Lublin, to family or friends in Warsaw. 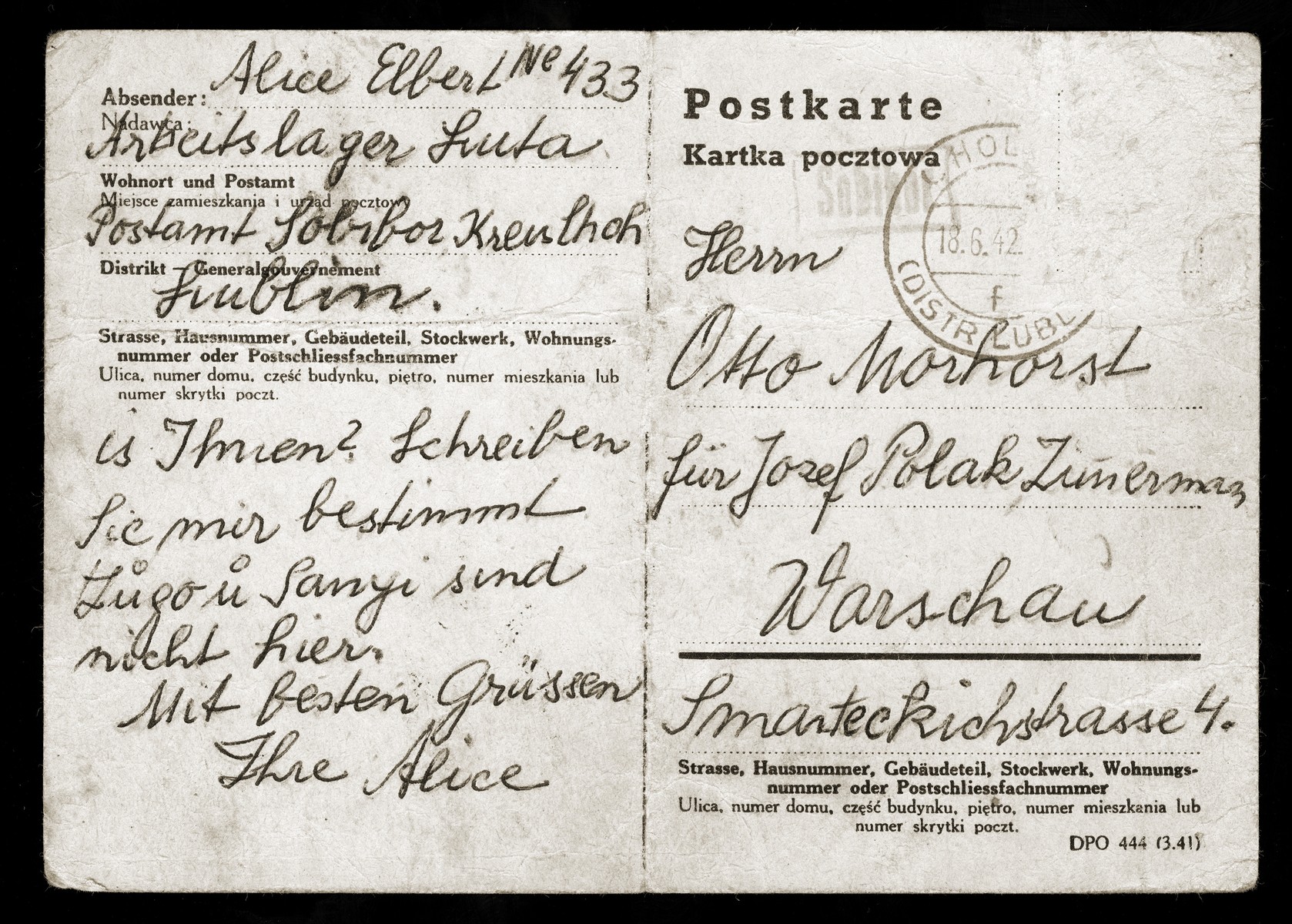 A postcard from Sobibor written by Alice Elbert, a Slovak Jew imprisoned in the Luta forced labor camp near Lublin, to family or friends in Warsaw.

In the message she writes that she is no longer with her husband and brother-in-law.

Event History
Luta was a forced labor camp for Jews that operated between 1940 and 1942 and was under the auspices of the water regulation authority.

https://www.ushmm.org/wlc/en/article.php?ModuleId=10007324.
Also See "Lublin Main Camp (aka Majdanek)" in Encyclopedia of Camps and Ghettos, Volume 1 Part B.
Biography
Denise Kopecky (born Denise Elbert) is the daughter of Hugo and Alice (Winczer) Elbert. She was born August 22, 1941 in Nemecka Lupca, Slovakia, where her father had owned a wholesale business before the war and her mother had taught piano. In March 1939 Nemecka Lupca became part of the newly independent state of Slovakia, whose fascist government moved quickly to impose restrictions on its Jewish population. These measures were intensified in the summer of 1941 when Slovak troops entered the war as allies of the German Reich. Deportations of Slovak Jews to ghettos and camps in Poland began in March 1942 and continued through October. After having their business Aryanized and their personal property confiscated, Denise's parents and uncle Alexander Elbert were deported to the Lublin district in June 1942. She was left behind with her grandparents, Gejza and Melania Elbert. Her grandfather, however, died suddenly the following month. Denise, who was then less than a year old, was saved from deportation by Maria Bela, a Christian friend of her parents, who had secured a new birth and baptismal certificate for her from a local Lutheran minister in May 1942. After the death of her husband Melania fled with the child to the mountains, where they remained for several months. In 1943 they returned to Nemecka Lupca after receiving assurances from the Slovak woman who had taken over Hugo's business, that it was safe to do so. A short time later, however, they were rounded-up and sent to Theresienstadt, where they remained until their liberation by the Soviets in May 1945. Denise was only three years old when the war ended. Following their release Melania and Denise returned to Nemecka Lupca. Denise later married Richard Kohn, a fellow survivor from Slovakia who had been interned as a young boy in the Novaky labor camp.