Adam Czerniakow (center), the Chairman of the Warsaw ghetto Jewish council, poses with visiting Polish police during a ceremony held in honor of Jewish policemen killed in the line of duty. 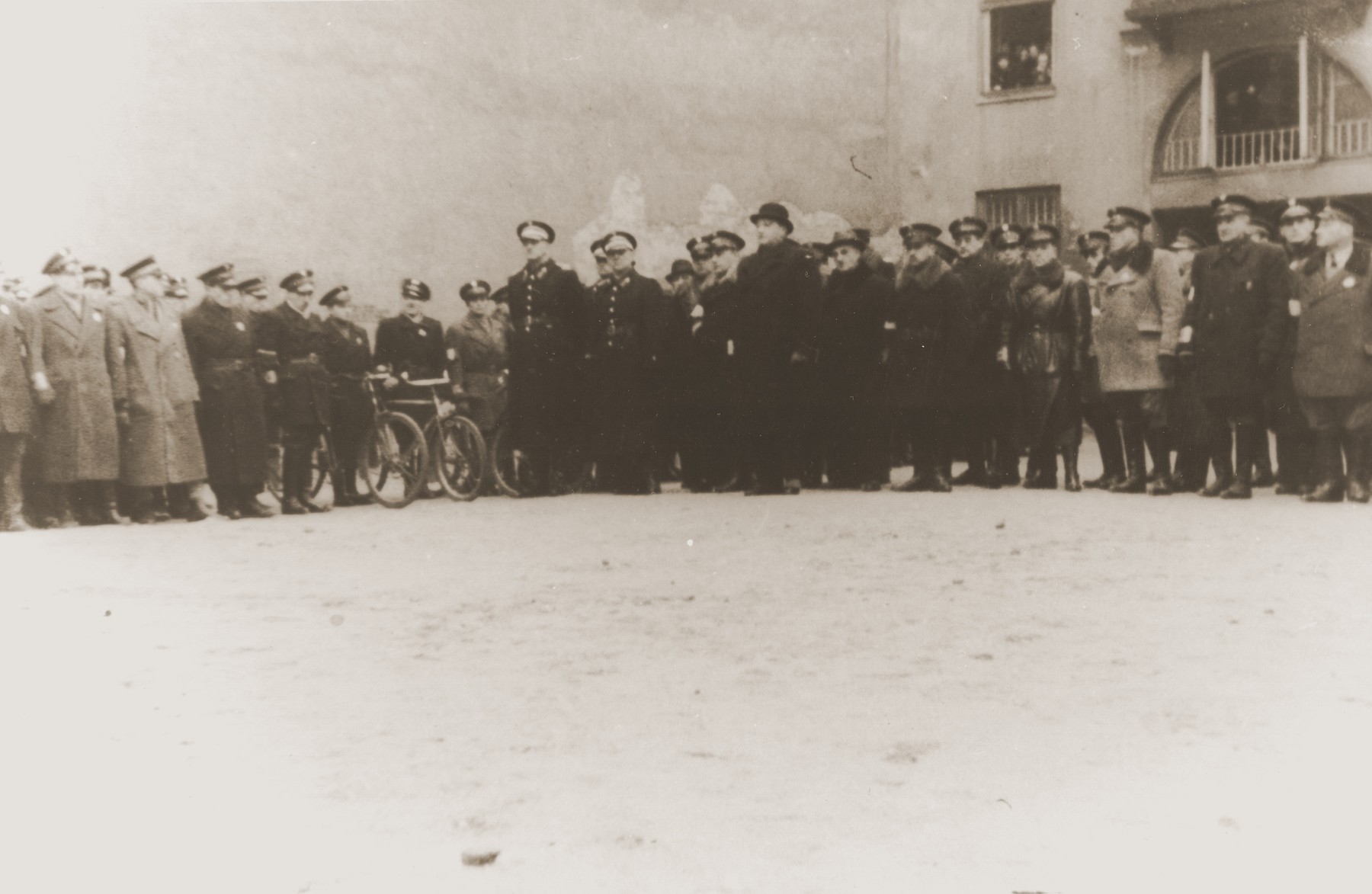 Adam Czerniakow (center), the Chairman of the Warsaw ghetto Jewish council, poses with visiting Polish police during a ceremony held in honor of Jewish policemen killed in the line of duty.

The ceremony was held in the inner courtyard of the Jewish Council headquarters on Grzybowska Street and was attended by Aleksander Resczynski, the commander of the Warsaw Polish police (standing center-left, at the end of the first row, to Czerniakow's right). This photograph was included in the "Oneg Shabbat" clandestine archive, assembled by Emanuel Ringelblum.

Biography
Adam Czerniakow (1880-1942), chairman of the Warsaw ghetto Jewish council. Czerniakow was born in Warsaw and raised in a non-religious, middle-class family. He studied chemical engineering and later taught for a time at vocational school sponsored by the Warsaw Jewish community. From 1927 to 1934, Czerniakow served as a member of the Warsaw Municipal Council, and in 1931 he was elected to the Polish Senate. He was known as an organizer of Jewish artisans and represented their interests in several Polish organizations. Czerniakow also served on the executive council of the Warsaw Jewish community during the 1930s, but was not affiliated with any Jewish political party. On September 23, 1939 after the chairman of the Warsaw Jewish community and other leaders had fled the city, Czerniakow was appointed head of the Jewish religious community by the Polish mayor. Eleven days later Czerniakow was summoned by the new German occupation authorities and ordered to form a Jewish council (Judenrat) of 24 members and serve as its chairman. He served in this capacity until his suicide on July 23, 1942. During this period Czerniakow kept a journal consisting of eight notebooks, all but one of which was recovered in 1960. In his capacity as Judenrat chairman, Czerniakow was tasked with the transfer of the Jewish community into the ghetto. He fought in vain against the idea of ghettoization and later, against the proposed boundaries, which were far too narrow to accommodate the large community. Once the ghetto was sealed Czerniakow became responsible for all matters related to food, work, health, housing and welfare. The bureaucracy of the Judenrat quickly mushroomed, eventually employing over 6,000 workers in 25 separate departments. Czerniakow was constantly beset by budgetary difficulties and was frequently confronted with contradictory demands from various German authorities. He also had a difficult time reconciling the competing interests of groups within the Jewish population. In general, Czerniakow's strategy was to try to prevent the direct intervention of German authorities in the operation of the ghetto and to circumvent them whenever possible to smuggle food and materials into the ghetto. He also encouraged clandestine educational, vocational and cultural activities. Though criticized by the Jewish underground for giving preference to assimilationists in his political appointments and failing to connect with the Jewish masses, it is generally accepted that Czerniakow was a man of decency and personal integrity, who did not seek to promote himself. He also understood that there were limits to his willingness to cooperate with the Germans. When he was asked to sign a deportation order for Jewish children in the ghetto during the mass round-ups of the summer of 1942, he realized he could cooperate no further and took the cyanide, that he always carried in his pocket.