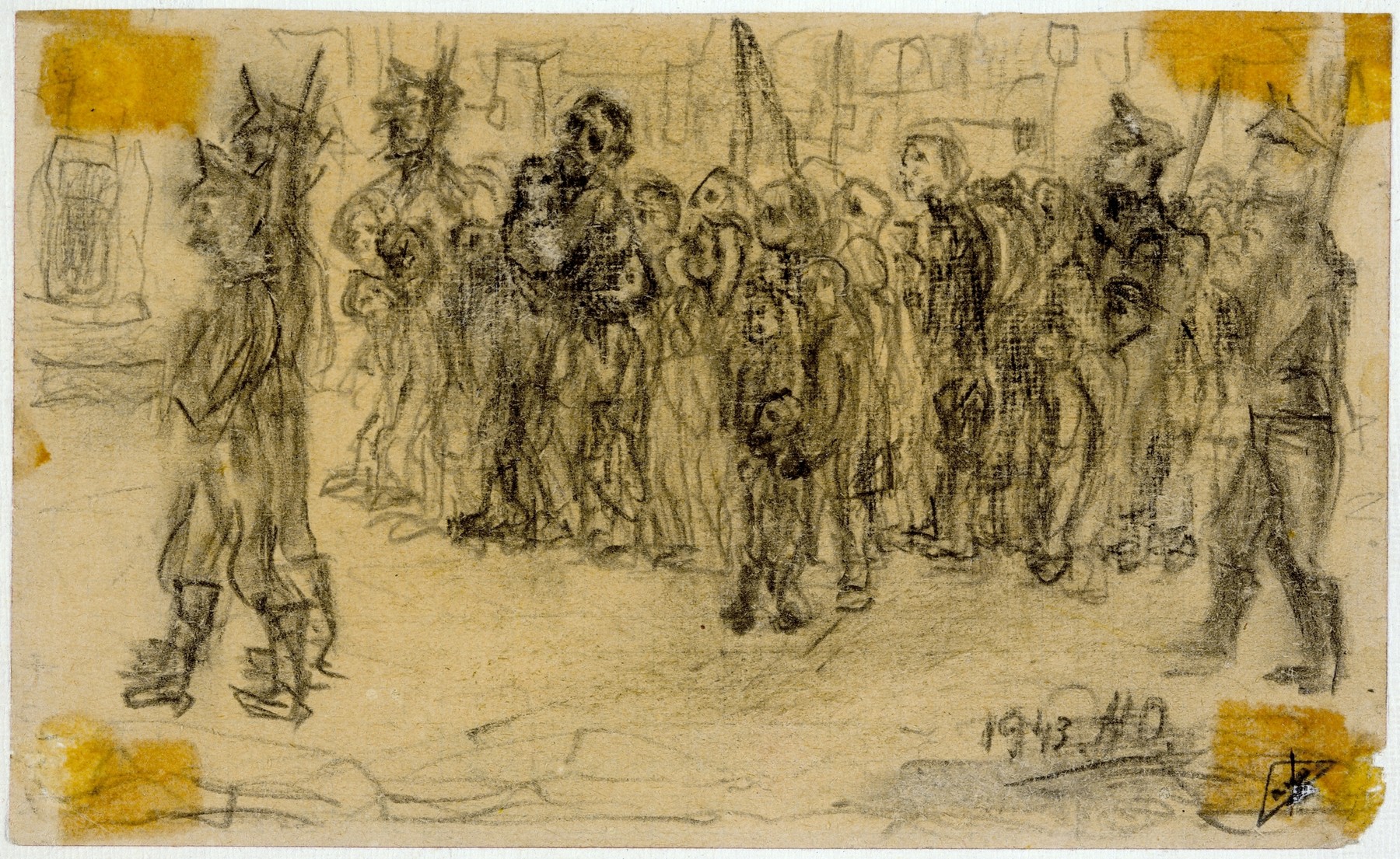 Halina Olomucki (b. 1919), née Olszewski, Polish Jewish artist, who, while interned at the Majdanek and Auschwitz concentration camps during World War II, drew pictures that depicted the misery of daily life of the inmates. Olomucki was born on November 24, 1919 in Warsaw. She studied art as a youth and young adult but was forced to stop, but at the outbreak of World War II. While living in the Warsaw ghetto, Olomucki drew scenes that depicted the misery of the Jewish existence there, deportations and the ghetto revolt. Olomucki was assigned to a labor detail that worked on the Aryan side of Warsaw, enabling her to smuggle some of her drawings to her friends still living outside the ghetto. She also used the opportunity to smuggle in food for her family. From the ghetto, she was deported to Majdanek. Upon her arrival, she was separated from her mother, who was sent to the gas chamber. Olomucki went through a series of selections, until she was also put in a line that was destined for the gas chamber. However, she took advantage of a moment of confusion and slipped away into a group of laborers. She lacked the stamina to continue the labor, and when she reached the barracks, she lay down and waited to die. The head of the block came and asked if anyone knew how to paint; Olomucki volunteered. She was instructed to paint slogans on the walls. When she finished, she was given coffee and an extra ration. She was then tasked to paint the walls of the barracks. She squirreled away extra paint and brushes, which she used to paint scenes of the camp and portraits of her fellow inmates. From Majdanek, she was deported to Auschwitz-Birkenau. On July 8, 1943, she arrived and was given prisoner number 48652. In the camp, she was assigned to paint signs and decorations for the Stubendienst. German officials ordered various works from her and rewarded her with bread and cheese. Prisoners in the camp also asked her to draw their portraits. Olomucki hid over 200 of these portraits under the wooden planks in her barracks. When Auschwitz was evacuated on January 18, 1945, Olomucki was put on the death march to Ravensbrück. From there, she was transferred to Neustadt, where she was liberated. After the war, Olomucki continued to paint and draw. She married the architect Boleslan Olomucki, and they settled in Lodz. In 1957, she emigrated to Paris, and during the 1960's, she held several exhibitions in Paris and London. In 1972, she moved to Ashkelon, Israel, where she now resides. Her works are included in the permanent collections at the Ghetto Fighters' House, Yad Vashem, the Musée d'Histoire Contemporaine and the Auschwitz Museum.