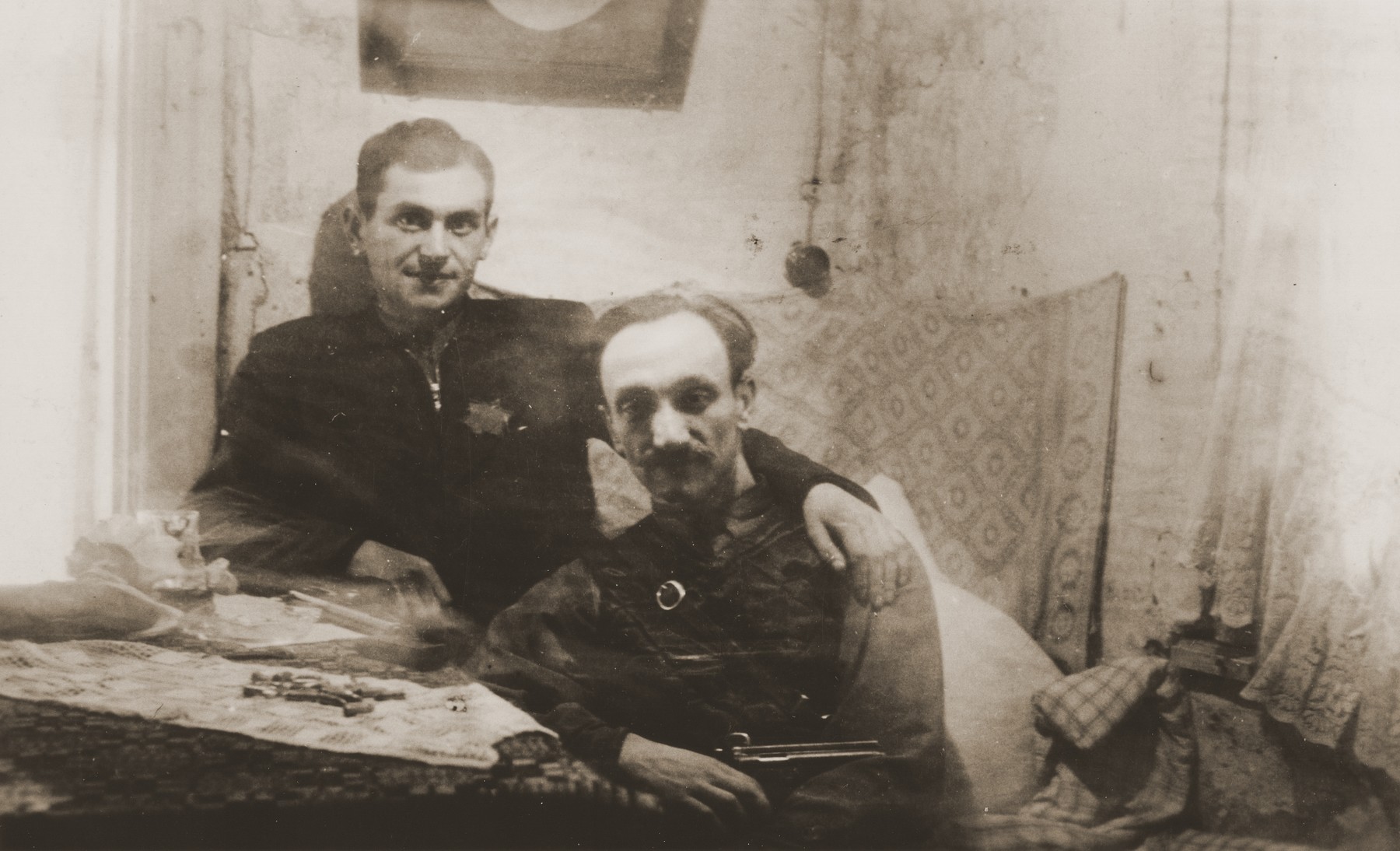 Pictured are Chaim Yellin, leader of the ghetto underground and his assistant Moshe Musel. Musel was one of Yellin's inner circle. He worked in a garage and was responsible for arranging transportation for departing partisans.

Event History
Armed resistance in the Kovno ghetto was a difficult undertaking. The hostility of the local population, fear of reprisals, distance from partisan bases and the lack of weapons mitigated against greater resistance activity. Yet despite these obstacles, communist and Zionist youth formed underground cells. The left-wing Anti-Fascist Organization aimed its sights on joining forces with the Soviet partisans, while the Zionist underground movements initially concentrated on preserving Jewish culture within the ghetto. In the summer of 1943, Zionist and communist groups united to form the Jewish General Fighting Organization under the leadership of Chaim Yellin, a young Yiddish author. The resistance organization sent approximately 350 young men and women to the Rudninkai Forest to join the partisans. The underground had access to radios and maintained contact with other ghettos through couriers. Three in particular played a central role: Irena Adamovitch, a Polish Catholic, Gessia Glazer (Albina), a Soviet Jewish partisan, and Dr. Helena Kutorgiene, a Lithuanian. The Kovno ghetto leadership also assisted the underground. Members of the police, notably Moshe Levin, Yehuda Zupovitch and Ika Greenberg, provided weapons training and helped smuggle fighters out of the ghetto by cutting electricity and then forcing partisans onto waiting trucks on the pretext that they were needed for work. The Jewish council supplied the underground with money and protection, while the ghetto workshops outfitted departing fighters with warm clothing and mess kits.
See https://www.ushmm.org/wlc/en/article.php?ModuleId=10005174.
See Also "Kauen Main Camp" in Encyclopedia of Camps and Ghettos Volume 1 Part A.
Biography
Chaim Yellin (1913-1944), Yiddish writer and underground leader in the Kovno ghetto. Yellin was born in Vikija, Lithuania, a small town near Kovno. Though educated at a Hebrew gymnasium, Chaim joined a circle of young Yiddish writers. Prior to the outbreak of World War II, he wrote stories and articles for various Yiddish journals, especially the daily "Folksblat". His father Eliezer (Lazar) founded and directed the "Lovers of Knowledge" library. Chaim and his brother Meir worked in this library, a gathering place for Kovno's leading Jewish intellectuals. In 1937 Chaim served as a delegate to a conference on Jewish culture in Paris. Following the incorporation of Lithuania into the Soviet Union in 1940, Chaim got a job in the government printing office in Kovno. In the summer of 1941 after the German invasion, he was forced into the ghetto, where he continued his literary pursuits by writing short vignettes on ghetto life. Soon after the establishment of the ghetto Chaim and a small circle of friends formed an underground movement called the Activists Union or Anti-Fascist Organization. In the summer of 1943, this group joined forces with the various Zionist factions to form a united ghetto underground, the "Jewish General Fighting Organization." Yellin played a key role in reconciling the various ideological factions and became the de facto leader of the new organization. In early fall 1943 he received a mysterious note addressed to "the Jewish author Chaim Yellin" and signed G. The note came from Gessia Glezer, alias Albina, a Soviet Jewish paratrooper. She proposed sending fighters from the ghetto to join partisans in the Augustowa Forest. Though this plan was unsuccessful, it set in place the mechanism for the escape of approximately 350 ghetto partisans to the Rudninkai Forest, where they joined up with pro-Soviet units. Chaim was the chief liaison with pro-Soviet partisans and from them obtained arms and transportation for the ghetto fighters. In April, 1944 Chaim left the ghetto to find transport for a final group of partisans. Discovered on a downtown street corner, a shoot-out ensued with Lithuanian and German police. Chaim was captured on April 6, 1944 and sent to a Gestapo prison. Throughout his month-long imprisonment he refused to divulge his true identity. In May 1944 Chaim was executed. The Kovno ghetto underground never recovered from his arrest and ceased to be an effective resistance force.