Members of the newly established hachshara [Zionist agricultural collective], Kibbutz Zettlitz, pose in front of the sign at the entrance to the farm. 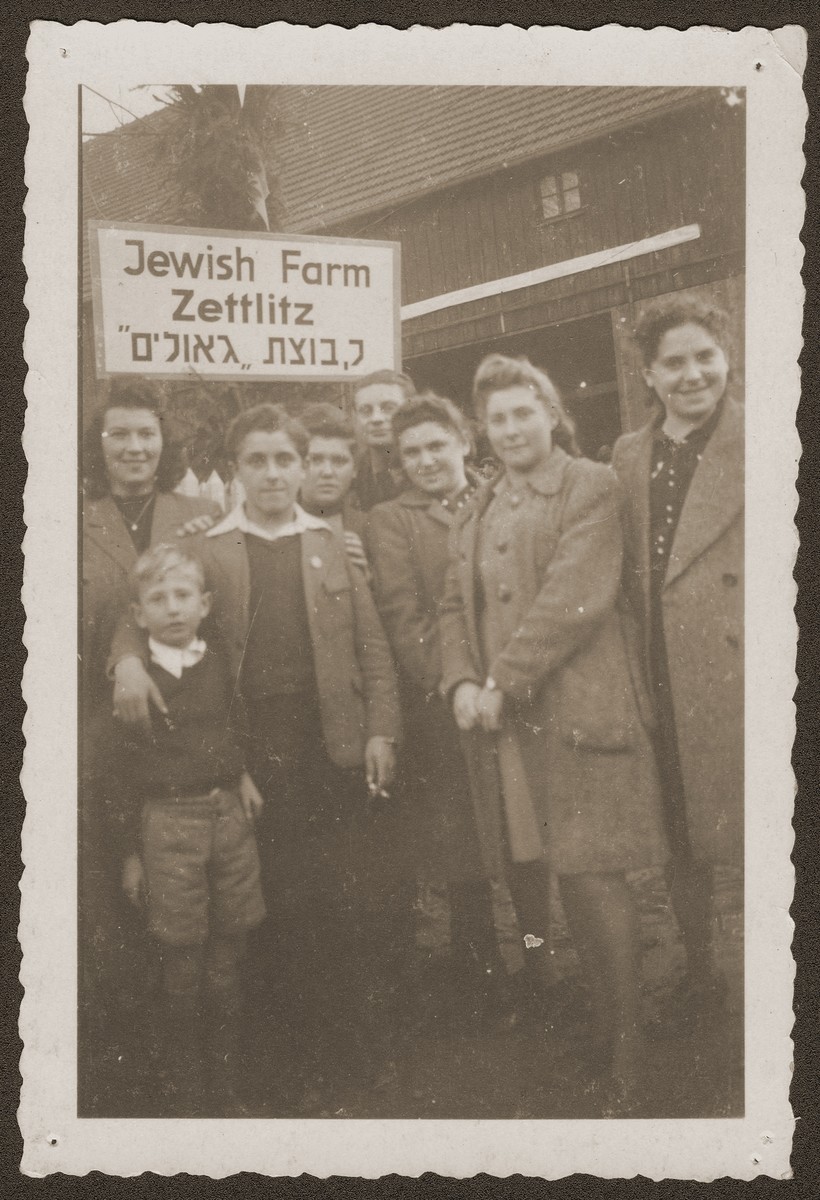 Members of the newly established hachshara [Zionist agricultural collective], Kibbutz Zettlitz, pose in front of the sign at the entrance to the farm.

Abram Gelbart is pictured in front, second from the left.

Biography
Arthur Gelbart (born Abram Gelbart) is the son of Mordecai Gelbart and Liba Zelkowicz Gelbart. Abram was born on March 25, 1929 in Klobuck, Poland where his father was a kosher butcher. He had two older sisters, Chana Rywka (b. 1925) and Edzia Ester (b. 1926), and one younger sister, Zisl Frajdl (b. 1931). In September 1939 shortly after the German invasion of Poland, Mordechai fled town with his three youngest children and walked towards Warsaw, but after reaching Kielce, they turned back. Abram's paternal uncle was shot shortly after the Germans entered Klobuck. In the fall of 1941 Mordechai Gelbart was caught by the Germans slaughtering a cow and deported to Auschwitz where he perished. Around the same time, the Klobuck ghetto was established. Abram celebrated his bar mitzvah in the ghetto in March 1942, and his oldest sister, Chana Rywka, married Pejsach Cyncytus. With Pejsach's help, Liba and her three children moved to the Czestochowa ghetto. In the fall of 1942 they decided to return to Klobuck. Only the children were transferred, and Liba was killed the following day in Czestochowa. Edzia, Abram and Zisl were sent from Klobuck to the Zagorze labor camp where they were forced to tear down houses and Jewish tombstones for the German to use as paving stones. In December 1942, the four Gelbart children and Chana's husband, Pejsach were deported to Blechhammer, a sub-camp of Auschwitz. A few days later the girls were transferred to the Langenbielau labor camp, a sub-camp of Gross Rosen. Abram, who was 14 years old, spent the next two years in building and repairing roads. His tattooed number was 177191. In January 1945 all the prisoners of Blechhammer were forced on a death march. They spent three to four weeks in tents in Gross-Rosen and then were taken by train to Weimar. The survivors of this journey walked to Buchenwald, and Abram was placed in the children's barrack #67. Abram Ensel, who was also from Klobuck, looked after him. Immediately after the liberation of the camp on April 11, 1945, Ensel brought Abram to Altenburg where some 20 liberated prisoners lived in a house. Abram's three sisters were liberated in January 1945. Chana and Pejsach, Edzia and her husband Herman Frank and Frajda went to the Weiden DP camp in Germany where they reunited with Abram. Frajda and Abram registered to go to Palestine, but after Edzia found a maternal great-aunt, the two children traveled to the United States instead. They were put in a foster home in Cleveland OH. In 1948 Abram was drafted into the US Army and served for two years. On November 5, 1955, he married Rozia Grossman, a fellow survivor from Poland.