Jewish DPs celebrate at a banquet at the Rothschild Hospital. 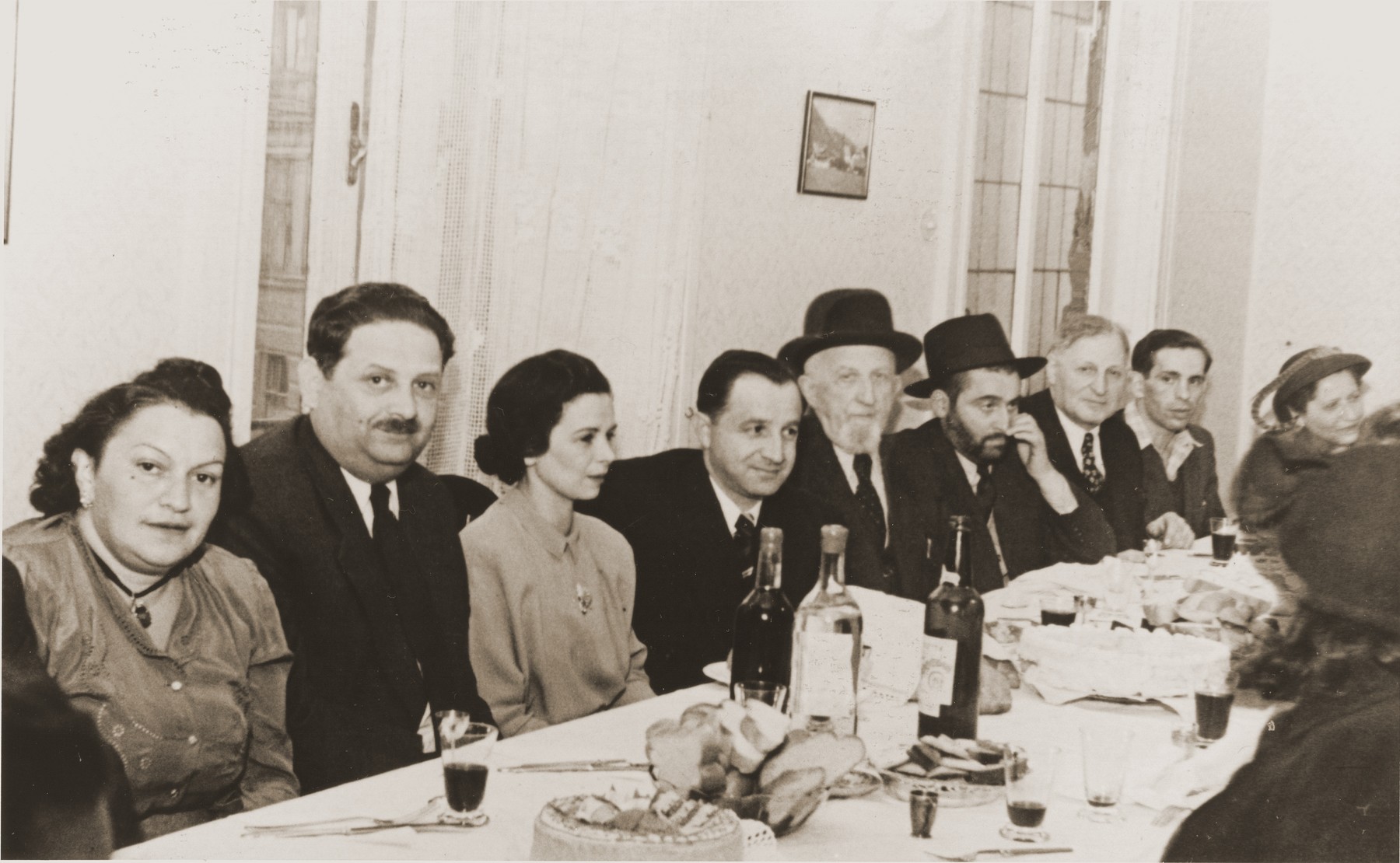 Jewish DPs celebrate at a banquet at the Rothschild Hospital.

Seated in the center is Kravetz, chief of security. Third from the left is Abel Birman.

Event History
Between July 1945 and May 1948 approximately 250,000 Jewish Holocaust survivors fled from eastern Europe to displaced persons' camps in Germany, Austria and Italy, in what was the largest organized, illegal, mass movement in modern times. Both the movement and the organization that directed its flow are known by the name Bricha [flight]. The Bricha was born when groups of Zionist partisan survivors from eastern Europe, who had attempted unsuccessfully to reach Palestine via Romania, made contact with Jewish Brigade troops stationed in Italy. The soldiers offered them the possibility (although limited and illegal) for reaching Palestine via Italy. Together they established the Bricha in Poland, an organization that quickly came under the direction of Haganah (Jewish underground) emissaries from Palestine. Bricha guides led groups of survivors on specially laid out routes from Poland to Italy and Germany. The transit expenses were covered by the American Jewish Joint Distribution Committee, which also provided food and shelter along the routes. Generally, the Soviet authorities turned a blind eye to the illegal migration, the British were hostile, and the Americans were accepting, because they could not use force to stop the flow. The largest wave of the Bricha occurred in the two months following the Kielce pogrom (July 4, 1946) in which 42 Jews were killed in the wake of a ritual murder charge. Over 90,000 holocaust survivors fled in a movement so sudden that the organization could not contain the flow. The goal of the survivors was to reach the American zone of occupation, where they could seek shelter in DP camps until they were able to find the means to emigrate to Palestine or the New World.
The Rothschild Hospital, located in the American zone of Vienna, Rothschild Hospital, was handed over to Zionist leader, Bronislaw Teichholz for use by DPs. Teichholz, originally from Lwow, had served in a minor capacity in the Jewish Council there before joining an armed band near the Polish-Hungarian border. He later was active in the Zionist underground in Budapest before being assigned to run the Viennese network for Bricha in May 1945. The Americans provided Teichholz with an allocation of food, clothing in medicine for refugees in the Rothschild Hospital. At the end of October, Brichah sent an emissary from Palestine, Artur Ben-Natan, to coordinate its Vienna operations while Teichholz directed the running of the hospital.

Rothschild Hospital could accommodate 2,000 persons, but in the period immediately following the Kielce Pogrom close to that number arrived daily. Refugees therefore were housed in satellite camps named for their street: Arzberger Platz, Alser Strasse, Rupertus Platz and Goldschlag Strasse
https://www.ushmm.org/wlc/en/article.php?ModuleId=10005462.
https://encyclopedia.ushmm.org/content/en/article/brihah.
Biography
George (originally Hirsch) Birman was born in 1922 in the German city of Konigsberg and grew up near the Baltic port of Klaipeda, in Lithuania. His father, Abel Birman, gave him a Voigtlander camera as a present for his tenth birthday, which he used to document pre-war, wartime and postwar Jewish life in Europe. In 1941 Hirsch was relocated to the Kovno ghetto. From there, he was sent to a number of labor camps in the area. He managed throughout his incarceration to keep his camera and photographs with him. On the night of July 9, 1944, before escaping from the Kedainiai labor camp near Kovno, Hirsch handed over his passport, birth certificate and approximately 150 photographs and negatives to his father, who was then working as the camp cook. Abel wrapped the documents and photographs in waxed paper and buried them in a canister under the kitchen. Using a pair of pliers, Hirsch cut a hole in the barbed wire fence surrounding the camp and escaped, along with his father and another companion. The three crawled through a drainage ditch and hid in a rye field before fleeing to the forest. One month later, after the German retreat, Hirsch returned to Kedainiai and dug up his photographs, which he found undamaged. He then proceeded to photograph the former labor camp. Hirsch eventually settled in Vienna, where he studied engineering and worked for the Bricha, the underground Zionist organization that assisted Jewish DPs in migrating to the West and immigrating to Palestine. He lived off and on at the Rothschild Hospital for four years registering DPs while his father helped in the management of the camp's supplies. In 1952 Hirsch immigrated to the United States.