Group portrait of members of "La Sixieme" [The Sixth], a Jewish underground rescue network operating in the southern zone of France. 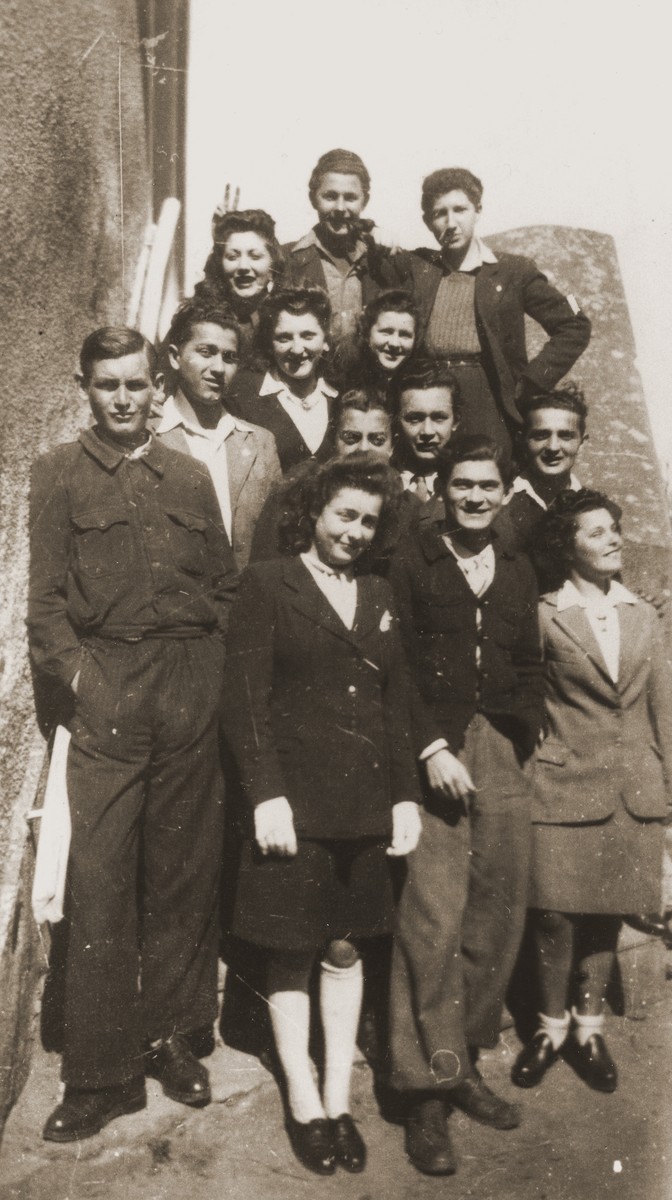 Group portrait of members of "La Sixieme" [The Sixth], a Jewish underground rescue network operating in the southern zone of France.

Leo Bretholz is pictured in the second row from the front at the left, wearing a white shirt.

Formed by Robert Gamzon, leader of the Jewish scouting movement, Eclaireurs Israelites de France (EIF), "La Sixieme" sought to provide documentation and hiding places for Jewish children and to smuggle them over the borders into Spain and Switzerland.

https://www.ushmm.org/wlc/en/article.php?ModuleId=10005519.
Biography
Leo Bretholz is the son of Max and Dora (Fischmann) Bretholz. He was born in 1921 in Vienna, where his father, an immigrant from Poland, worked as a tailor and amateur Yiddish actor. Leo had two younger sisters, Henny and Edith (Ditta). Shortly before his ninth birthday, Leo's father died. His mother supported the family by doing embroidery. After the German annexation of Austria in March 1938, several relatives and neighbors of the family were arrested. Leo's mother became fearful for his safety and urged him to leave the country. On October 25, 1938 Leo took a train to Trier, Germany and escaped to Luxembourg by swimming across the Sauer River. From Luxembourg, he fled to Antwerp, where he remained until the German invasion in May 1940. He was expelled from Belgium as an enemy alien and sent on a train to France, where he was interned in the St. Cyprien detention camp. Leo managed to escape and fled to the town of Luchon near the Spanish border. When all refugees were expelled from the town to make way for the winter tourist season, Leo moved to Bagneres. In December 1941 Leo learned that his application for an American visa had been granted. However, on the day he was to pick it up the U.S. declared war, making it far more difficult to get out of Europe. For a time Leo was assigned residence in the town of Cauterets, but he fled when he learned that French police were rounding-up foreign-born Jews and sending them to the Drancy transit camp. On October 4, 1942 Leo crossed over the border into Switzerland using a false passport issued in the name of Paul Meunier, but he was quickly apprehended by Swiss border guards and sent back to France. The French authorities then confined him to the Rivesaltes internment camp, where he remained less than two weeks before being sent to Drancy. On November 5, 1942 Leo was assigned to convoy 42 bound for Auschwitz. Determined to escape deportation, Leo and a friend jumped off the moving train. He made his way back to Paris, where he stayed for a few weeks with an aunt. After securing another set of false papers under the alias Marcel Dumont, Leo fled again. He was arrested after crossing into the southern zone, but was released on condition that he present himself at a reception center. Instead, Leo went to friends in Bagneres. Again he was arrested, but this time was sentenced to a one-year prison term on January 8, 1943. After a foiled escape attempt, Leo was beaten and placed in solitary confinement. In September 1943 he was transferred to a labor camp in Septfond. Soon after Leo was sent to a labor brigade on the Atlantic coast, but he escaped from the train before it reached its destination. Once again Leo returned to his aunt in Paris, arriving shortly before Christmas 1943. After securing a new set of false papers in the name of Max Henri Lefevre, Leo left for Limoges, where he joined a Jewish resistance group known as "La Sixieme" [The Sixth]. Cover for his underground activity was provided by his false membership in the Compagnons de France, a Vichy paramilitary youth group. Leo remained in Limoges until the liberation. In 1947 he immigrated to the United States, where he settled in Baltimore. Leo's immediate family, his mother and sisters, perished during the war.