Lejb Melamdowicz celebrates the ninth birthday of his friend Masha Bernsztejin with family and schoolmates. 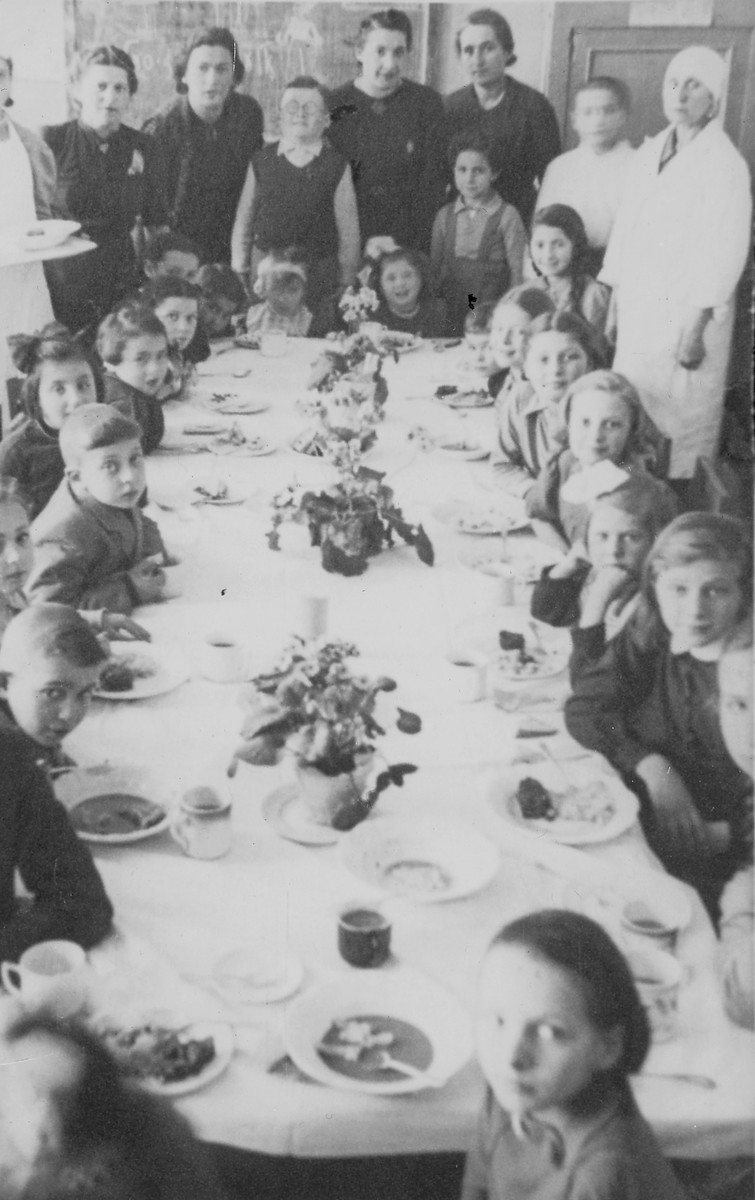 Lejb Melamdowicz celebrates the ninth birthday of his friend Masha Bernsztejin with family and schoolmates.

Seated on the right are Olenka Lazar, Rochke Stollen, Masha Bernsztejin, Dorotka Goldsztein, and Dinele Bachrach. In the back left is Chaya Sora Kaufman. Seated in the back are Sarah Elbaum, standing behind her is her mother, Esther Elbaum, and standing in the left corner, Mrs. Mandelman.

(Sarah Elbaum has also been idenitied as Sarenka Elboim. The child to her right is not her sister, as originally reported.)

Masza Bernsztejn (now Masha Leon) is the daughter of Mordechai Velvel and Zelda Goldin Bernsztejn. She was born on March 21, 1931 in Warsaw. Mordechai was born on June 14, 1905 in Byten into a rabbinic family. He attended the yeshivas of Slonim, Baranoviche and Bialystok and received smicha (ordination) at age of nineteen. However, at the age of 21, after hearing a stirring oration by the Jewish socialist Vladimir Medem, Mordechai left the yeshiva world to join the socialist Yugnt-Bund Tzukunft. He assumed the name Matvey, and in 1926 he moved to Warsaw to write for Bundist publications. He also served as the technical secretary of the Central Committee of the Polish Bund and worked to recruit former yeshiva students and Hasidim into the Bund. Mordechai married Zelda Goldin, a childhood friend who was working in Warsaw as a dressmaker. Following the German invasion of Poland, Mordechai left with most Bund activists on September 3 after a government order that men should flee to Lublin. Zelda, who was helping her pregnant sister, did not want to leave immediately, and she agreed to meet Mordechai later in Byten. She and their eight-year-old daughter Masza, who was very ill and suffering from malnutrition, left Warsaw a few months later. Zelda hired a peasant to take them out of Warsaw, but he instead brought them to Gestapo headquarters in a small town. There the Gestapo shot half of those rounded up. Zelda and Masza survived, and after their release they began walking on foot to Byten trading bread, salt and needles for shelter. Masza posed as a Polish child and Zelda as her Italian nurse. When they crossed into Russian occupied Poland they became stranded in no man's land with hundreds of other refugees. Eventually, a Polish woman took pity and hid them for a few days until they had the strength to try crossing again. This time they were stopped by an illiterate Russian soldier who let them pass convinced that Masza's name was proof of her Russian origins. Meanwhile, Mordechai had returned to Warsaw to look for them. Eventually, the family reunited in Byten at the end of December 1939. They stayed with relatives for a few days before learning that the local Communist commissar, who coincidentally was also a former classmate, intended to arrest Mordechai. The Bernsztejns escaped Byten and fled to Vilna. In June 1940, the Soviet Union seized control of Lithuania, and during the pre-dawn hours of August 28, 1940 NKVD agents and armed soldiers burst into the Bernstzejn apartment and arrested Mordechai for his Bundist activities. Mordechai signaled to Masza with his eyes to gather up any incriminating documents. She took the papers with her to the outhouse and destroyed them. Mordechai was taken to the Lukishki prison where he shared a cell with the revisionist Zionist leader and future prime minister of Israel, Menachem Begin. Mordechai was sentenced to several years in prison and later was sent to Uzbekistan and Tashkent. While in prison, he became very ill and at one point was given up for dead. After the war, he returned to Poland, and then moved to Germany where he stayed for the next two years conducting research under aegis of UNRRA about destruction of the German Jewish community. He also played a major role in shipping the YIVO archives to the United States, and he collected 66 cartons of archival material on Jews in Germany 1645-1945. In 1948, unable to get a visa to the United States, he immigrated to Argentina. Zelda joined him there, and Masza who by now was married, remained in the United States. In Argentina he worked as an historian and journalist for YIVO, the AJC yearbook. He published a multi-volume history of the Jews of Germany and edited memorial books on Byten, Slonim and Baranovichi.

Following Mordechai's arrest, Zelda and Masza went into hiding with distant cousins in Vilna. Though many of their Bund friends, fearing for their own safety, broke off contact, members of the Mir yeshiva helped them obtain transit visas to Japan; Zelda received Sugihara visa #1882. The American Jewish Labor Committee also assisted them. They flew from Kovno to Moscow, took the train to Vladivostok and a boat to Japan. After a six month stay in Kobe, they sailed to Seattle in July on board the Heian Maru. However, American immigration officials rescinded their visas once they learned that Mordechai was a political prisoner. Zelda and Masza were transferred to a Canadian ship and arrived in Vancouver on July 31 1941. From there they went to Montreal where they stayed for the duration of war. After the war ended they received a letter saying that they would be repatriated to Poland. Masza, then age fourteen wrote to Eleanor Roosevelt stating why they wanted to go to America, and they were given permission to join distant cousins in Chicago. Zelda joined Mordechai in Argentina, and when the two immigrated to the United States in 1959 Masza saw her father for the first time in nineteen years.