A group of Mir yeshiva students pose with an American chaplain in Shanghai. 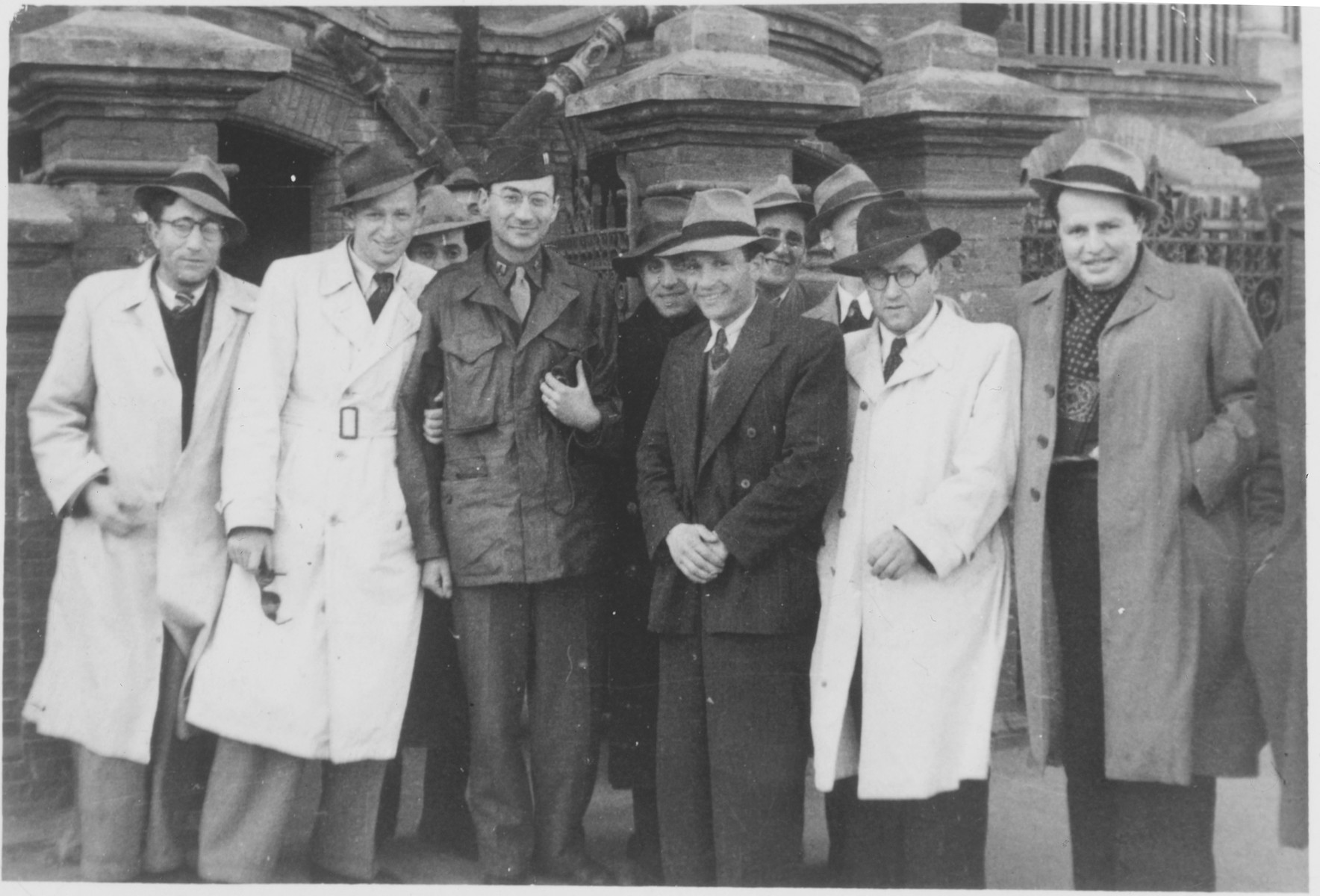 A group of Mir yeshiva students pose with an American chaplain in Shanghai.

Event History
The yeshiva of Mir was founded in 1815 by Samuel ben Hayyim Tiktinski. Located in the Grodno district of Belarus, the town of Mir came under Polish sovereignty in the interwar period. Following the German invasion of Poland, Mir was occupied by Soviet troops (according to the terms of the Nazi-Soviet partition plan) on September 16, 1939. Alarmed by the wholesale confiscation of private property and the suppression of Jewish religious life under the new Soviet regime, the yeshiva, headed by Rabbi Eliezer Yehuda Finkel, fled to Vilna (then in independent Lithuania) on October 15, 1939. Two months later, after being instructed to leave Vilna, the yeshiva moved to the Lithuanian town of Kedainiai. Here the yeshiva enjoyed a few months of relative peace until the area came under Soviet rule in August 1940. When it was ordered to leave Kedainiai, the yeshiva split up into four groups and moved to the towns of Karkinova, Seta, Ramigala and Crac. Rabbi Finkel, fearing further Soviet persecution, searched for other ways to save the yeshiva. During the summer of 1940 a plan emerged to transfer the Mir Yeshiva to the Far East. One of the students, Yaakov Ederman, who spoke Polish fluently, went to the Polish consul in Kovno and obtained Polish passports for the Mir refugees. At the same time, two yeshiva students of Dutch origin, Leo Sternheim and Nathan Gutwirth, approached the honorary Dutch consul, Jan Zwartendijk and secured visas to Curacao for the group. Another student, Moshe Zupnik who spoke both German and English, was assigned the task of approaching the Japanese consul in Kovno, Chiune Sugihara. Zupnik camped out at the Japanese consulate for a full two weeks until he received transit visas for the entire yeshiva. After these documents were obtained, Rabbi Eliezer Portnoy, known as the ambassador of the yeshiva, went to NKVD [Soviet secret police] headquarters to request exit visas for the group. Travel money was obtained through the efforts of Rabbi Avraham Kalmanovich, who had left Lithuania for the United States shortly before the start of the war. Working with various aid organizations including the American Joint Distribution Committee, Agudat Yisrael, Ezrat Torah and the Vaad Hatzalah, he raised $50,000 for the Mir Yeshiva refugees. Almost the entire yeshiva left for Japan during the months of January and February 1941, though a small group left for Palestine with Rabbi Finkel and his wife. Those heading for the Far East brought with them books from the yeshiva library and even a Torah scroll, so they could continue their studies. The yeshiva students traveled to Vladivostok on the Trans-Siberian railroad, and from there, sailed to Japan. They stayed in Kobe for six months before being deported to Shanghai in the fall of 1941. Soon after their arrival the students of the Mir Yeshiva were offered a temporary home in the Beth Aharon synagogue on Museum Road. The Mir Yeshiva emerged as the only eastern European yeshiva to survive the Holocaust intact. After the war the Mir refugees immigrated either to Palestine or the United States, where the yeshiva was formally reconstituted in Brooklyn, New York in 1947.
https://www.ushmm.org/wlc/en/article.php?ModuleId=10007090.
Biography
Yaakov (Jacob) Ederman is the son of Rabbi Alter Benzion and Miriam Udes Ederman. He was born in 1921 in Luck, Poland, where his father was a leading rabbinic figure. Yaakov had six siblings: Meir Aryeh, Sholem Yitzhak, Efraim, Avrohom Tzvi, Yosef and Shaindel. At the age of ten, Yaakov was sent to study at the yeshiva in Ostrow Mazowiecka. Later he transferred to another in Baranovichi, and finally in the late 1930s, he moved to the yeshiva in Mir. Yaakov fled with the entire yeshiva to Vilna on October 15, 1939, two weeks after the start of World War II. After the break up of the yeshiva in August 1940, Yaakov was among the students who were sent to Krakenava. Since Yaakov spoke Polish fluently, he was tapped by the leadership of the Mir Yeshiva to negotiate with the Polish legation at the British consulate in Kaunas to obtain visas for the members of the yeshiva. After a week of meetings, he emerged with approximately 300 certificates for all the students and rabbis who did not have valid passports. Yaakov left for Japan in early 1941, bearing Sugihara transit visa #880. He stayed in Kobe until the fall of 1941 and then proceeded to Shanghai, where he remained for the rest of the war. Yaakov immigrated to the United States in 1947.