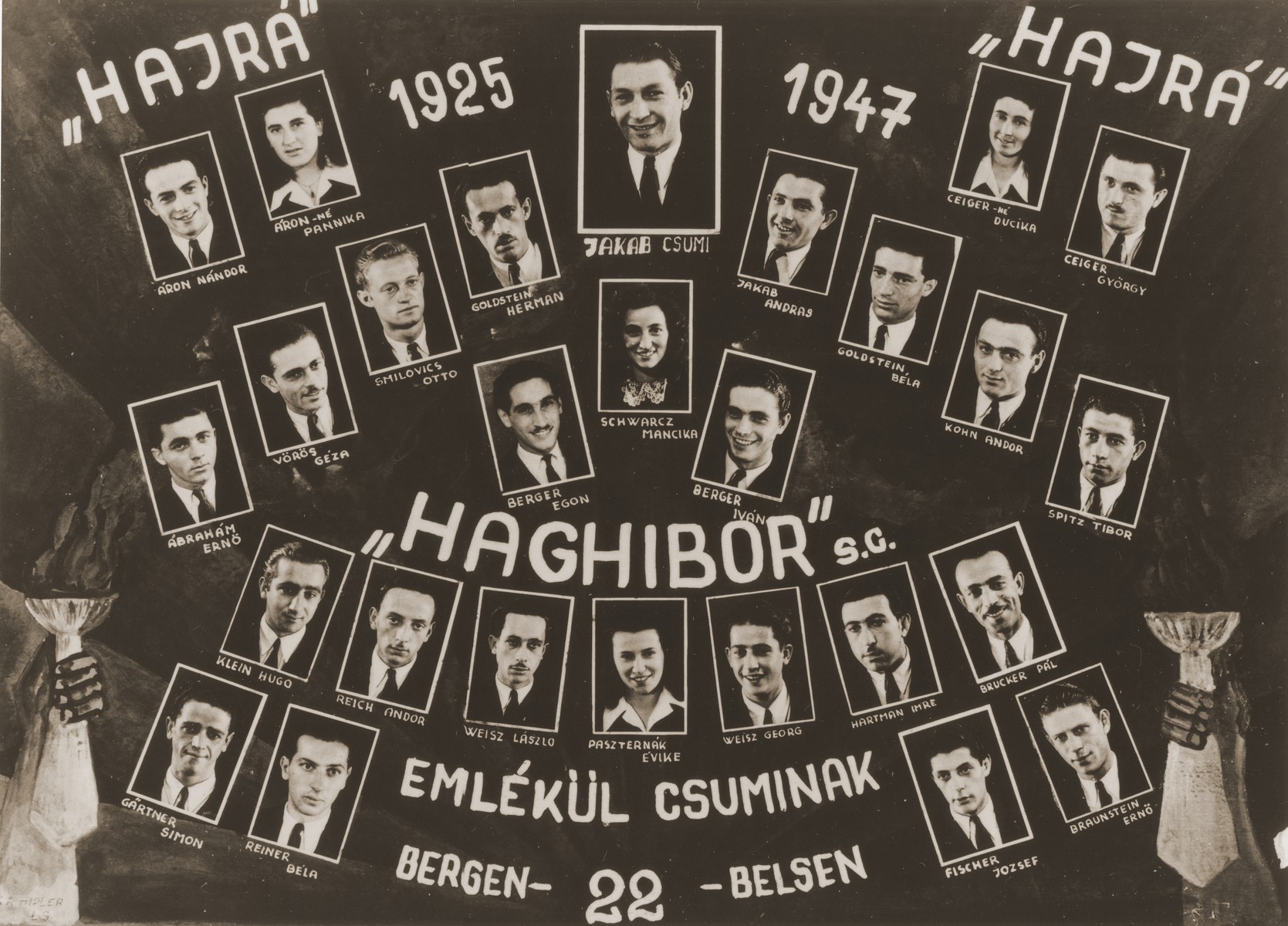 The Arons are pictured at the top left.

Biography
Anna (Panika) Rosenbluth is the daughter of Joseph and Sara (Diamant) Rosenbluth. She was was born on November 24, 1929 in Nagykata, Hungary (near Budapest), where her father owned a store. Anna had one younger sister, Judith (b. 1936). In March 1944 Joseph was sent out for forced labor and was never heard from again. Two months later the rest of the family was moved into the ghetto in Nagykata. In June they were all deported to Auschwitz, where Anna's mother and sister were put to death. After spending ten weeks in Auschwitz, Anna was put on a transport to Bergen-Belsen. From there she was sent to Salzwedel, a sub-camp of Neuengamme in Saxony, where she was put to work in a munitions factory. Anna was liberated in April 1945. Six weeks later she was moved (with a few hundred other female survivors) to the Bergen-Belsen displaced persons camp.
Ned Aron (born Nandor Aron) is the son of Eugene and Josephine (Wexler) Aron. He was born on June 26, 1926 in Cluj, Romania, where his parents were in the grocery business. Nandor had one younger sister, Eva (b. 1927). Nandor's father died in 1931, leaving his wife to manage alone with two small children. During the war Cluj became the capital of Hungarian-ruled northern Transylvania, where, until the spring of 1944, the Jewish community was largely left in peace. In the course of the first week in May, however, the full force of Nazi anti-Jewish policy was suddenly brought to bear with the concentration of 18,000 Jews in a ghetto established in a local brickyard. The ghettoization was followed three weeks later by the deportation of its inhabitants in a series of transports to Auschwitz. Nandor was confined to the Cluj ghetto for a month before his deportation to Auschwitz in June 1944. He remained in the concentration camp only a few weeks before being transferred to the Hirschberg im Riesengebirge, a sub-camp of Gross Rosen in Lower Silesia. While at Hirschberg, Nandor was sent to work at a munitions factory in Bad Warmbrunn, where he built cannons for the German army. He was transferred a few more times to labor camps in the area before his liberation by Soviet troops in May 1945, one month shy of his nineteenth birthday. Shortly after his release, Nandor boarded a freight train and made his way back to Cluj, where he found a few surviving uncles. He remained in Cluj through the summer working for the American Joint Distribution Committee. Then he learned that his sister Eva was alive in Bergen-Belsen and set out to find her. His progress was delayed by the difficulty of crossing borders that were no longer open. When Nandor finally reached Belsen early in 1946, he learned that Eva, who had been evacuated to Sweden for medical treatment, had since died of tuberculosis. Soon after his arrival in Belsen, Nandor met Anna Rosenbluth. They were married on Lag b'Omer, May 19, 1946, along with 48 other couples. Anna wore clothes borrowed from Germans, and a friend of Nandor's bought her a ring at a pawnshop. For the next three years, Nandor served as a policeman in the DP camp and played an active role in the Haghibor hachshara [Zionist collective], consisting mostly of Cluj survivors. The Arons left Germany for the United States in May 1949.