Abram Warszaw with a name card intended to help any of his surviving family members locate him at the Kloster Indersdorf DP camp. This photograph was published in newspapers to facilitate reuniting the family. 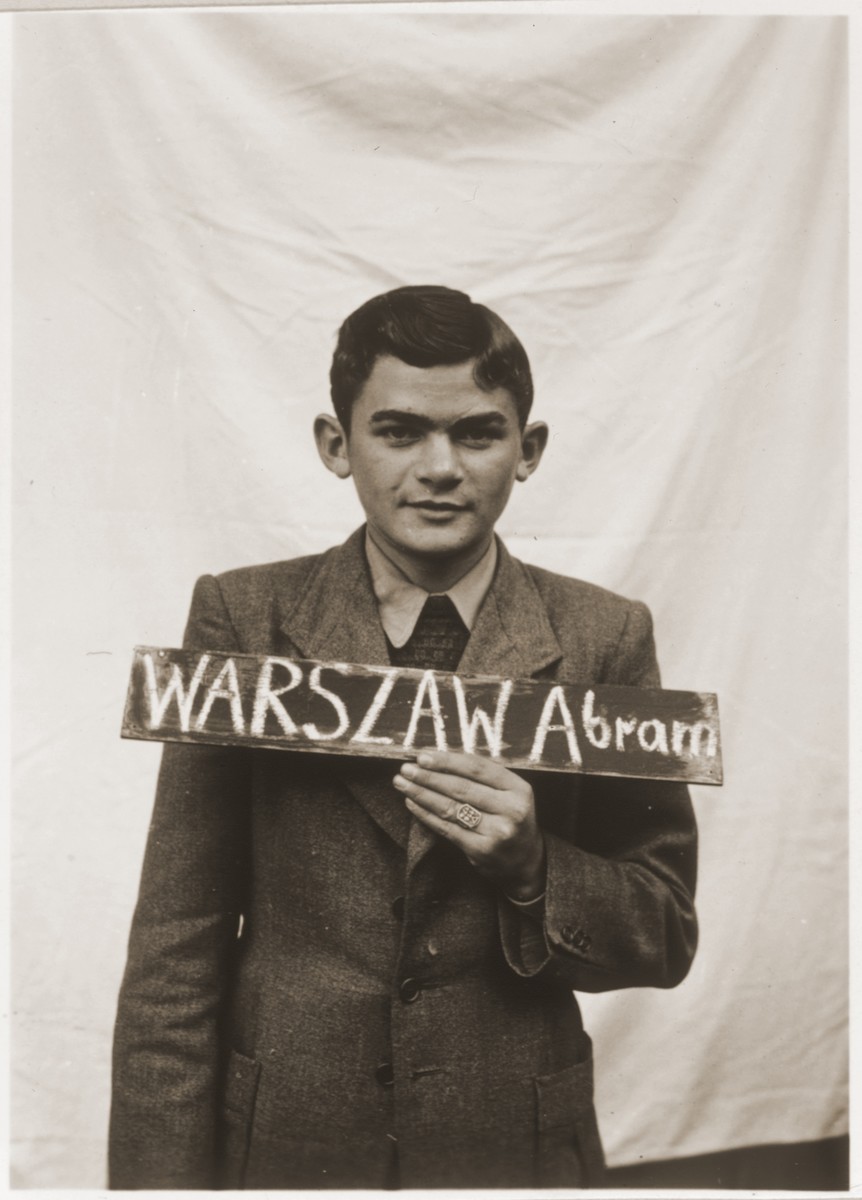 Abram Warszaw with a name card intended to help any of his surviving family members locate him at the Kloster Indersdorf DP camp. This photograph was published in newspapers to facilitate reuniting the family.

[Sources: Fischer, Greta. Oral testimony, USHMM Archives
Koenigseder, Angelika/ Wetzel, Juliane. Lebensmut im Wartesaal, Fischer Verlag, 1995, p.256.; email by German researcher Anna Andlauer]
Biography
Alec Ward (born Abraham Warszaw), was born in Parysow, Poland, in March 1927 to Szmul Warszaw and Ester Dudkiewicz. Szmul was a glazier of windows and left Parysow shortly after Abraham was born to find work in Laskowa. The family finally settled in Magnuszew, where Szmul found work. Ester was a seamstress. She died in Magnuszew during childbirth in 1936. Abraham’s father, Szmul, remarried, and his new wife, Sara Bronstein, was very kind to Abraham; his sister, Lea; and his brothers, Lajb, Meylach, and Hershel. In October 1942, the Warszaw family was moved into the ghetto in Kozienice. Abraham ran away from the ghetto and hid with a Christian family for a few months. While he was gone, the ghetto was liquidated and his father, mother, and siblings were taken to the Treblinka killing center. They are believed to have perished shortly after arriving in Treblinka.

Eventually, Abraham voluntarily left the Christian family who had been hiding him because of the increasing danger to both the family and himself if he was discovered. After he left the family he went to a neighboring ghetto. He was later sent to labor camps in Skarzysko, Czestochowa, and Eisenhütte. On January 20, 1945, he arrived in Buchenwald and was assigned to the Flössburg subcamp for a time, before being transferred to Mauthausen. Abraham remembers vividly the 15-day train ride from Flössburg to Mauthausen. He recalls,“At first we could not sit. But as men started to die from starvation and exhaustion, we were able to sit on their dead bodies.” Typically this train ride from near Weimar, Germany, to near Linz, Austria, would take less than a full day. However, because of track damage, the train had to stop constantly so the prisoners’ captors could repair the tracks.

Abraham was liberated from Mauthausen by American troops on May 5, 1945, along with eight other boys including Eugene Kamer. The nine boys were taken to live in private homes in Regensburg, Germany, where the American MP Julius Abrams ordered the residents to care for the boys or there would be consequences. Abraham remembers speaking to a female United Nations Relief and Rehabilitation Association (UNRRA) officer about where he wanted to go and what he wanted to do with the rest of his life. Abraham knew that he didn’t want to stay in Germany, so the UNRRA worker helped him to go to the Kloster Indersdorf children’s center. “Life was good in Kloster Indersdorf,” Abraham recalls. He said that the German nuns there took good care him and the other orphans and that many US Army soldiers visited the children.

From Kloster Indersdorf Abraham immigrated to London, England. He remembers being “very apprehensive” on the flight from Germany to England. He was worried that he wouldn’t be able to learn the language or a profession. He wondered if the English would force him to change his religion, but his fears were quickly assuaged when he arrived in England. “The English people were very kind to me,”he says, so kind that he decided to settle in London and still lives there today. Upon his arrival, he went to visit the uncle of one of the children from Regensburg, Tola. The uncle, Boris Bennett, was originally from Lodz, Poland, and had immigrated to London after World War I. Abraham told him that Tola had survived the camps and had left Germany for the United States to be with her new husband’s family. Abraham communicated with Mr. Bennett in Yiddish, his native tongue. Tola’s uncle and his family helped Abraham get accustomed to life in England.

In 1950 Abraham took a trip to Israel, where he left his name and contact information with a Jewish agency. In 1958 the agency contacted him, telling him that a cousin of his from his mother’s side of the family, Judka Yehuda Dudkiewicz, had seen his name and wanted to contact him. Abraham went to visit his cousin in Israel in 1958 and remained in contact with him until his death. Abraham became a women’s clothing tailor in England and later worked as a quality control officer in the garment industry for 20 years. He travelled to Hungary and Slovakia where he taught workers to create garments based on his company’s specifications. Abraham met his wife, Hettie, at a charity dance in 1952. They married in 1963. Abraham credits his wife with helping him through his many illnesses and says, “Without her I wouldn’t be alive today.” To this day they live in a northwest suburb of London. Abraham and Hettie had two children, a son who died at the age of 23 from melanoma, and a daughter, Lyla. They have one grandson.