Photo journalist Ruth Gruber (center with cap) poses with a group of Jewish DPs who have just arrived from Europe. 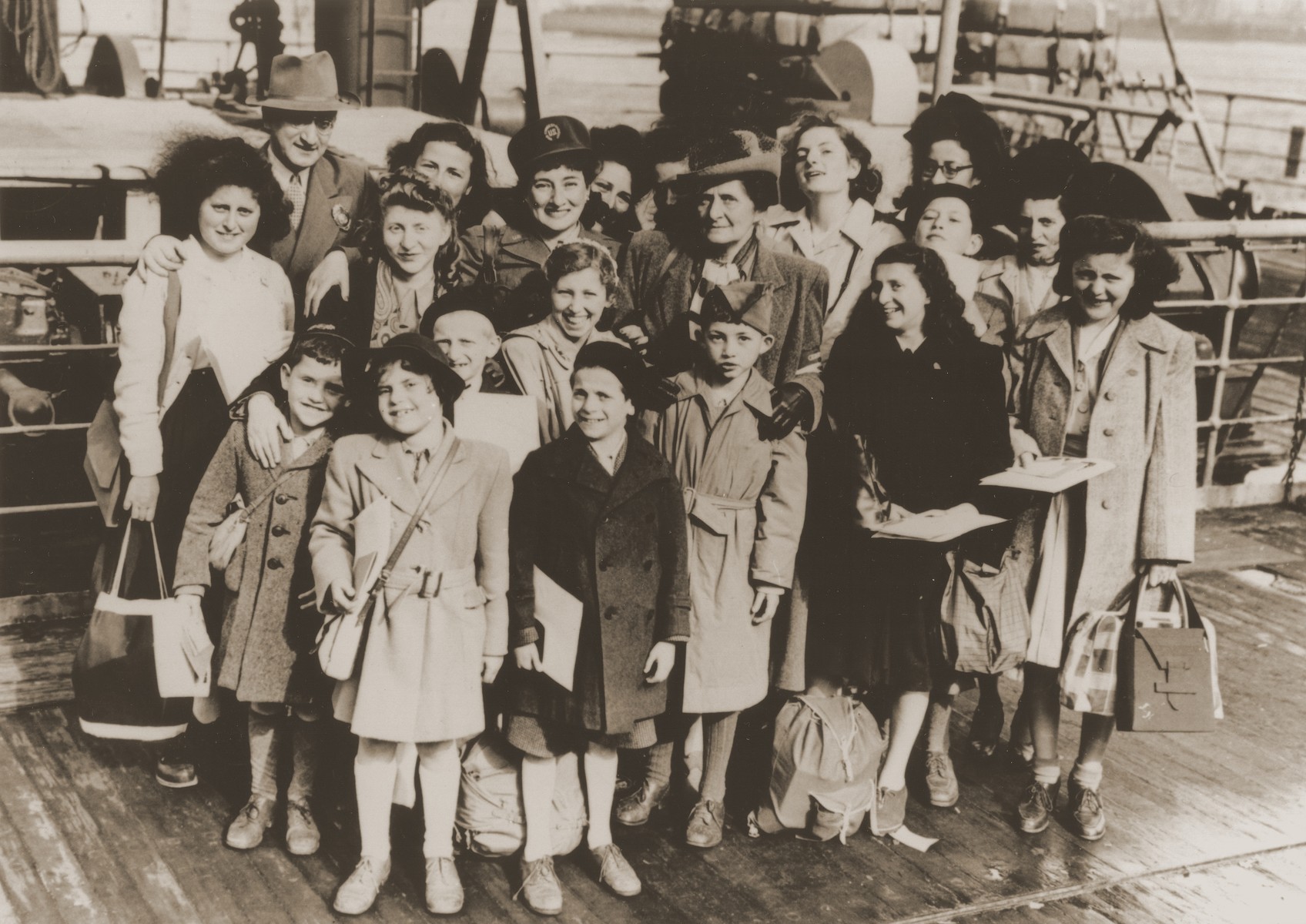 Photo journalist Ruth Gruber (center with cap) poses with a group of Jewish DPs who have just arrived from Europe.

Biography
Ruth Gruber (1911-2016), American Jewish photo journalist, who in 1944 escorted a transport of European refugees to the United States. Born in Brooklyn, N.Y., Gruber is the daughter (the fourth of five children) of David and Gussie (Rockower) Gruber, Russian Jewish immigrants who owned a liquor store and later went into real estate. An outstanding student, Gruber earned her bachelors and master's degrees by the age of 19, and became the world's youngest Ph.D. at the age of 20. She earned her doctorate at the University of Cologne, where she lived from 1931 to 1932. While pursuing her studies, she had the opportunity to observe first hand the growing influence of National Socialism in Germany. Upon her return to the U.S., she began a career as a journalist, writing for the New York Herald Tribune. In 1935 she won a Guggenheim Foundation fellowship to study women under fascism, communism and democracy. The New York Herald Tribune gave her press credentials, and she became the first foreign journalist permitted to travel through Siberia to the Soviet arctic. Her experiences were recorded in her book, I Went to the Soviet Arctic (1939). Her work came to the attention of Secretary of the Interior, Harold Ickes, who in 1941 hired her as a special assistant to study the prospects of homesteading in Alaska. Three years later, Ickes offered her another special assignment, to accompany a group of approximately 1000 Jewish and non-Jewish refugees, who were being transported from Italy to the U.S. under the new Free Port program sponsored by the War Refugee Board. While crossing the Atlantic with the refugees, Gruber recorded their stories of survival. She also took photographs documenting the voyage and the arrival of the transport to the Fort Ontario Refugee Shelter. This material formed the basis of her 1983 monograph, Haven. After the war, Gruber lobbied hard to win American citizenship for the Fort Ontario refugees, a goal that was eventually achieved. In 1946 she returned to the private sector and soon was tapped by the New York Post to cover the work of the newly created Anglo-American Committee of Inquiry on Palestine. She accompanied the members of the committee during their four month (February-May 1946) trip to Europe and the Middle East and photographed their visits to DP camps and meetings with Arab and Jewish leaders. The following year Gruber was invited by the New York Herald to make the same trip with the UN Special Committee on Palestine (UNSCOP). While in Palestine, she witnessed the arrival of the Exodus 1947 illegal immigrant ship. Expecting the British to deport the DPs to internment camps on the island of Cyprus, she flew there overnight and spent the next few weeks documenting in words and photographs the life of the Cyprus internees. When the Exodus passengers were rerouted back to Europe, Gruber quickly made her way to southern France, where she was selected as the pool correspondent to represent the American press and was the only journalist permitted to board any of the prison ships. Her photo of Jewish DPs on the Runnymeade Park hoisting a Union Jack on which a swastika had been painted, became Life magazine's Picture of the Week. She recorded her experiences with the Exodus passengers in her book Destination Palestine (1948). In 1951 Gruber decided to settle down and raise a family. She was married and widowed twice, to Philip Michaels and Henry Rosener, both lawyers and social activists, and had two children, Celia and David. During these years Gruber continued to work as a special foreign correspondent for the New York Herald Tribune, covering the stories of successive waves of new immigrants to Israel. In 1985 she traveled to Ethiopia to aid in the rescue of the Ethiopian Jews, an experience she described in her book, Rescue: The Exodus of the Ethiopian Jews (1987).

[Sources: Hyman, Paula and Moore, Deborah Dash (eds.), Jewish Women in America: An Historical Encyclopedia, Routledge, New York, 1997; Jewish Virtual Library web site, www.us-israel.org/jsource/biography/gruber.html]
Marion Michel is the only child of Jakob and Charlotte Michel. She was born on October 18, 1929 in Andernach, Germany, where her father and uncle Julius owned a wine business. In 1936 the business was abandoned, and the Michels moved to Cologne. There Jakob worked with his other brother, Berthold, in the fur trade, until deciding to leave Germany. The Michel family left for Brussels in May 1939. Immediately after the German invasion of Belgium on May 10, 1940, all male Jewish refugees from Germany were ordered to report to the German authorities. Jakob turned himself in and was sent to the St. Cyprien internment camp in France. While his wife and daughter remained in Brussels, Jakob was transferred first to Gurs and then to Les Milles. In 1941 Charlotte and Marion fled to Marseilles, where they stayed for one month, before moving to Aix-en-Provence. The two lived in Aix until the summer of 1942, when the deportations began. Charlotte heard that the OSE (Oeuvre de Secours aux Enfants) was sheltering Jewish children, and arranged for the Jewish welfare organization to take Marion. The day before she was to be picked up they traveled to Les Milles to see Jakob. This was the last time Marion was to see her parents. The OSE took Marion to the Hotel Bompard in Marseilles. Charlotte remained in Les Milles and was deported to Auschwitz the next day. Jakob was deported shortly thereafter. Marion lived at the Hotel Bompard until October 1942, when she was transferred to the OSE children’s center at Chateau du Couret. In May 1943 she was transferred to another home in Megeves, where she stayed for three months, until the OSE smuggled her into Switzerland. After crossing the border, Marion was hospitalized for malnutrition and chronic leg sores in two refugee camps near Geneva. In September 1943, she was taken in by the Wolffers, a Jewish family living in Zurich. Mrs. Wolffer came from the same German village as Marion’s father, and after the war, offered to adopt the orphaned child. Marion, however, wanted to try to contact some her mother’s relatives in the United States. Ultimately, she was able to reach her uncle, Julius, who had emigrated to the U.S. in 1940. In the summer of 1946, Marion sailed aboard the SS Gripsholm to the New York. In Philadelphia, she was reunited with Julius, to whom Charlotte had entrusted the family’s photographs. Marion was eventually adopted by her uncle and settled in Philadelphia. In 1955 she married Alan Oliner.