Four members of the orphans transport to England known as "The Boys" pose on a city street. 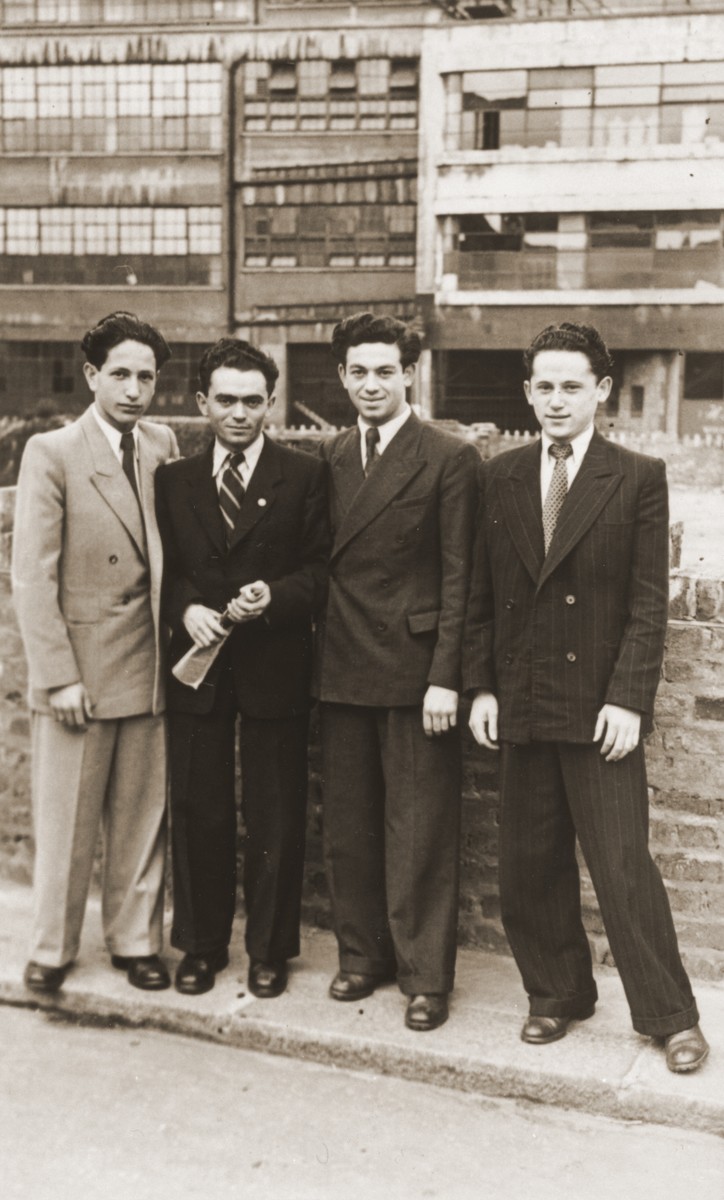 Four members of the orphans transport to England known as "The Boys" pose on a city street.

Event History
After the liberation of the concentration camps, the British philanthropist, Leonard Montefiore, organized a campaign to bring young survivors to Britain. In June 1945 the British Home Office approved a plan to transport one thousand orphans to Britain for recuperation before their resettlement elsewhere. The program was paid for with funds raised by the Care of Children from Concentration Camps organization that was headquartered at the Bloomsbury House in London and chaired by Montefiore. The first group of three hundred orphans was brought from Theresienstadt to Prague and then flown to England on Lancaster bombers. They arrived on August 14, 1945. Though only children below the age of sixteen qualified for the transport, the group actually included several seventeen and eighteen-year-olds who had falsified their ages on their applications. Since very few young children survived the camps, all but thirty of the orphans were over the age of twelve. After landing in England the children were housed at a hostel in Windermere, where they received religious and secular instruction and medical treatment. The second group of orphans arrived in Southampton in November 1945, followed by groups in February and March 1946. The final group of orphans left Prague in April 1946. They stayed in Taverny, France for six weeks before coming to England in June. Despite considerable effort, the program's officers never found a full one thousand orphans who qualified for admission. In all, 732 children were brought to England. Though commonly called "The Boys," the group included eighty girls. All but a dozen were completely orphaned by the war. Soon after their arrival the children were regrouped by religious and political affiliation and sent to separate hostels for the ultra-orthodox, orthodox, religious Zionists and secular Zionists. By the fall of 1946 the program was running into financial trouble. Funding was low and most of the children had no prospects for moving elsewhere as originally intended. In 1947 the orphans were informed that they had to find employment and seek their own housing arrangements. To help maintain their social network, which had become a substitute for the families they had lost, the members of the orphans transport established the Primrose Jewish Youth Club on June 6, 1946. Financed by private donations, the Primrose Club provided a venue with a kosher dining facility where "the Boys" could continue to meet regularly. The club remained in existence until 1949 when it lost its lease. Of the 732 members of the orphans transport, approximately half settled permanently in England. The others moved to Israel, the United States and Canada.
https://www.ushmm.org/wlc/en/article.php?ModuleId=10005142.
Biography
Josef (now Joseph) Grossman is the son of Ignacz and Helen Grossman. He was born on August 13, 1928 in Seredne (Transcarpathia), where his father owned a vineyard and farm. He had one sister, Marta (b. 1926), and four brothers, Nusan (b. 1927), Szruel and Elia. In March 1939 Seredne was annexed by Hungary, and until the spring of 1944, the family lived in relative safety. After the German occupation of Hungary in March 1944, however, their situation deteriorated rapidly. The Grossman family was resettled to the ghetto in Uzhorod, where a short time later they were rounded-up and deported to Auschwitz. Later that summer Josef was transferred to Warsaw to join a labor brigade that was to clear the area of the former ghetto and ship all salvageable construction materials to Germany. In August 1944, however, after the outbreak of the Warsaw Uprising, the Germans evacuated the Jewish labor camp and marched their prisoners to Kutno. From here they were sent to Germany, where Josef was interned in one of the Kaufering subcamps of Dachau. He was finally liberated on April 29, 1945 at the age of sixteen. Of his immediate family, only his sister Marta survived. After the war Josef returned to Seredne, where he stayed for six months before moving to Teplice Sanow. There he learned about the orphans transport to England and registered to join it. Josef left on the final transport that departed from Prague in April 1946. After staying in England for several years, Josef immigrated to the United States, where he married Erika Vermes, another member of the orphans transport, in 1954.