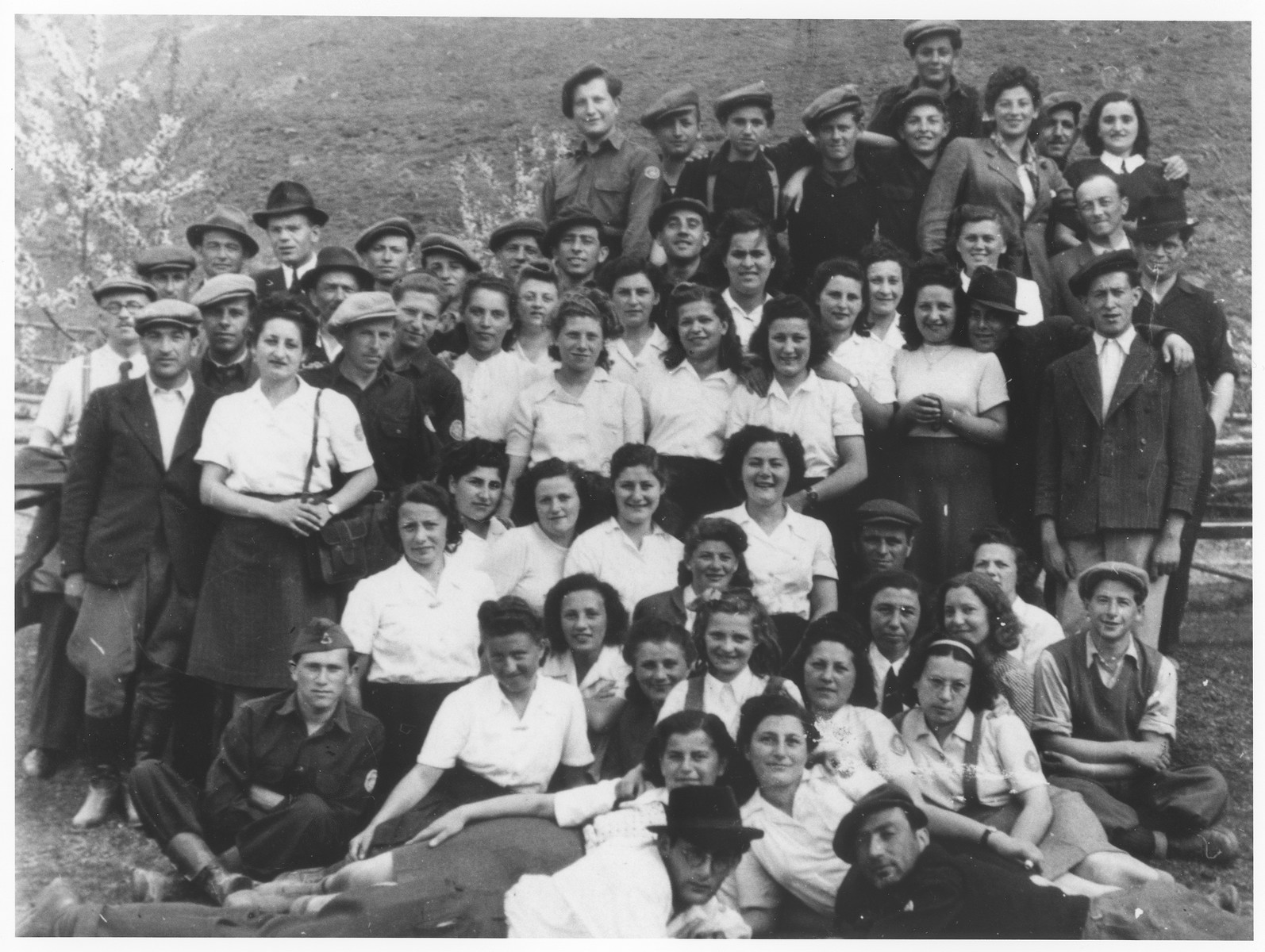 Among those pictured are lying down: Schaja Klein and Meir Alexander Halpern. Directly behind Meir is Ettu Schwartz. Maity Klein is behind her wearing a tie. Leah Halpern is behind her to the left. In the first standing row, Moshe Weinstein is third from the left and to his left is Naftali Benhaim. Standing in that row behind Leah is Pnina Halpern. Also pictured are Israel Klein, Rifka Klein, , and Henryk Klein.

Biography
Schaja Klein is the son of Leah Malka (Steinmetz) and Israel Klein. He was born in Poland on October 13, 1927 but moved as a young child to Mukacevo, where his father worked as a glazier. Schaja had four older siblings: Maity, Henryk, Yitzhak and Rita; and three younger siblings: Esti, Yosef Mordechai, and Shlomo. In April 1944, when the Jews of Mukacevo were forced into a ghetto, Schaja and Henryk were taken out to work on a government-owned pig farm. A few weeks later the entire family (with the exception of Yitzchak, who had been drafted in the Hungarian labor service) were deported to Auschwitz. Schaja's mother and three of his siblings: Esti, Yosef Mordechai and Shlomo, were gassed upon arrival in the death camp. Schaja was transferred to Buchenwald after only three days in Auschwitz. Four weeks later he was sent on to Dora, and then to labor camps in Ellrich and Harzungen near Sachsenhausen, where he was put to work building bunkers. During the final weeks of the war Schaja was sent on a death march. He was finally liberated on May 8, 1945 by the Red Army. Instead of being released, however, Schaja was held in a camp in Prenzlau, Germany (Soviet zone) until September 1945, when he managed to escape to Prague. He lived there for several months with an aunt and uncle, during which time he learned that his father and four older siblings had survived. They were reunited in Austria in February 1946. For the next several years Schaja lived in the Bad Gastein displaced persons camp until his immigration to the United States in January 1949. He later married Pnina Halpern, whom he had met in Bad Gastein.

Pnina (Halpern) Klein is the daughter of Yitzchok Isaac and Malka (Berkowitz) Halpern. She was born on January 14, 1928 in Mukacevo, where her father worked as a shochet, mohel and baal koreh [a ritual slaughterer, performer of circumcisions and Torah reader]. Pnina had eight older siblings and one younger one: Aharon Menahem, Yehudit, Shaindel, Berel, Tzvi Yosef, Frieda, Leah, Meir Alexander and Miriam. In the interwar period Aharon Menahem moved to Holland, while Yehudit and Shaindel immigrated to Palestine. The rest were living in Mukacevo when the war broke out. In 1942 Berel was sent to forced labor in a coal mine in Yugoslavia, where he perished. In April 1944, on the first day of Passover, the rest of the family was forced into the Mukacevo ghetto. Four weeks later all but Tzvi Yosef were deported to Auschwitz. Tzvi Yosef evaded the round-up by hiding in the woods. Pnina's parents and younger sister, Miriam, were killed upon arrival in Auschwitz. Soon after, Frieda perished as well. Pnina and Leah managed to stay together sorting confiscated property in one of the warehouses in the camp. In January 1945 they were sent on a death march to Ravensbrück. From there, they were taken to Neustadt, where they worked digging shelters for the Germans. When the sisters were liberated by the Soviets on May 2, they soon realized they were not to be released. Instead they were taken with a group of 125 women to a work camp in the Russian interior. In December, when a Soviet officer paid a visit to the camp commandant, who was his girlfriend, the inmates overheard him using a Yiddish term and begged him in Yiddish to let them go home. Shortly thereafter they were released. The train ride back to Mukacevo took another eight weeks. Finding it under Soviet rule, Pnina and Leah remained only a single night before moving westward with the help of the Bricha. Soon after reaching Czechoslovakia the sisters learned that their brother, Tzvi Yosef had survived. The three siblings were reunited in the town of Usti Nad-Laben, where they were soon joined by another brother, Meir Alexander. Early in 1946 Meir brought his sisters to the Bad Gastein displaced persons camp in Austria. There, Pnina, Leah and Meir joined a Mizrachi kibbutz hachshara [religious Zionist collective] and made plans to go to Palestine. Towards the end of 1946 they left Bad Gastein for Belgium, where they stayed for six months in Chateau de Rue, before proceeding on to Marseilles. In April 1947 Pnina, Meir and Leah set sail for Palestine on board the illegal immigration ship, Theodor Herzl. Denied entry into Palestine by the British, the Halperns were sent along with the rest of the passengers to detention camps in Cyprus, where they remained for several months before being allowed to settle in Palestine. Pnina later married Schaja Klein, also from Mukacevo, whom she met while living in Bad Gastein.