Ursula Klipstein does homework at a desk in her room. 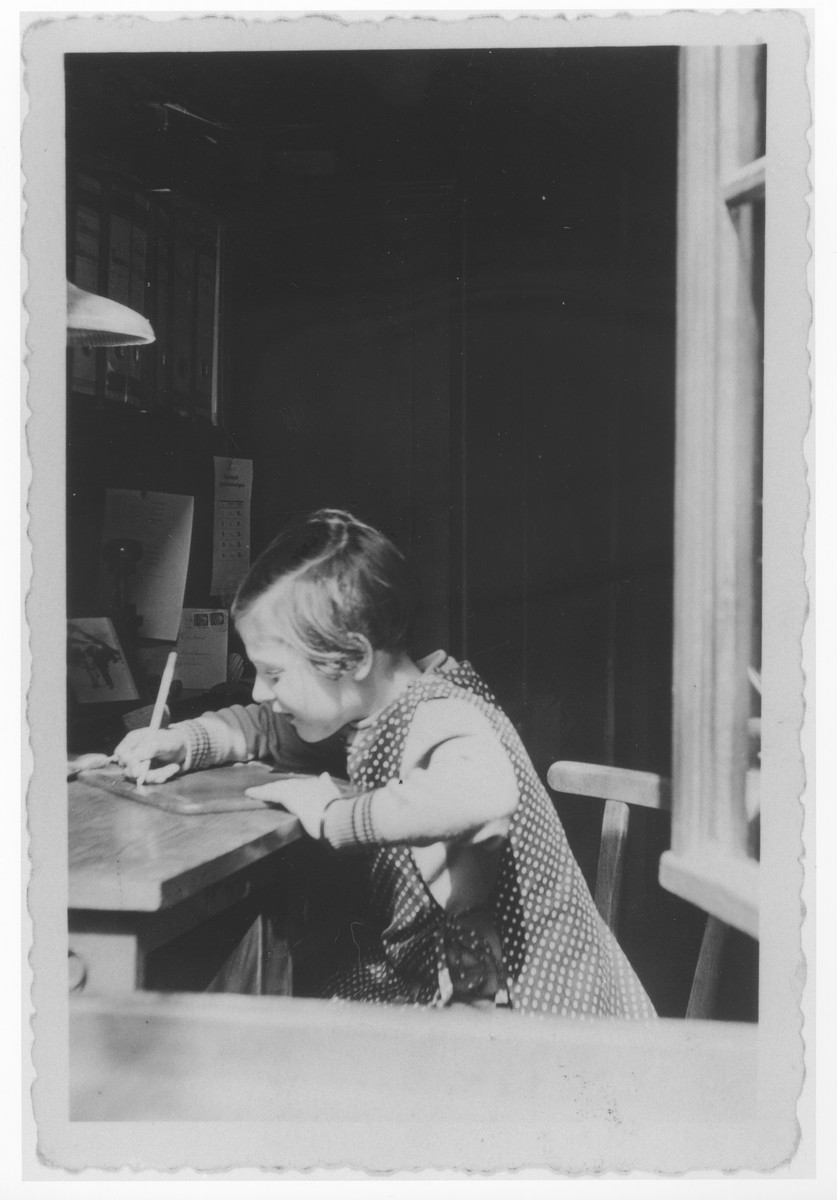 Ursula Klipstein does homework at a desk in her room.

Biography
Janine Gimpelman Sokolov (born Ursula Klipstein) is the daughter of Leo and Irma (Wertheimer) Klipstein. She was born on December 7, 1930 in Plauen, Germany, where her father was a merchant and her mother, a sales clerk. In 1932 the family moved to Frankenhausen and applied for American visas. They returned to Plauen in 1938 to stay with grandparents while awaiting their American visas that never came. Though no one in her immediate family was arrested during Kristallnacht, the pogrom persuaded Ursula's father to leave Germany immediately. On Christmas eve he smuggled himself across the border into Belgium and made his way to Brussels. A few months later, Ursula joined a Red Cross sponsored Kindertransport that departed from Cologne and arrived in Brussels in February 1939. She stayed at an orphanage in Luen, a suburb of Brussels, until her mother was able to escape from Germany and join the family in Brussels shortly after the outbreak of the war. For the next two and a half years the family lived together, supporting themselves by working in the underground economy. When the situation of Jews became more precarious in 1942, the family went into hiding with the Vanderschrick family in Jette, a suburb of Brussels. In May 1943, after the Klipsteins were denounced to the Gestapo, the police raided their hiding place and arrested Ursula's parents. Ursula was not taken because she was assumed to be the child of a Dutch neighbor. Left alone, Ursula approached a Christian friend of the family, who found her a hiding place in a convent outside of Braine-l'Alleud. Run by the Soeurs de Sainte Marie, the convent was home to twenty-five students, half of whom were Jewish children in hiding. Ursula, who was given the name Janine Hambenne, stayed at the convent from June 1943 until the liberation in September 1944. After their arrest, Ursula's parents were taken to the Malines transit camp. One evening the inmates were allowed a cultural evening, which was attended by the German staff as well as the prisoners. At this event, Irma read aloud a poem she wrote about camp life. The camp commander, who recognized her accent as being from the same part of Germany as his own, was taken by her poem. In appreciation, he arranged for Irma and Leo to be employed in the camp rather than be deported to the east. Irma continued to work in Malines as a maid and Leo, as a carpenter, until liberation. After the war Leo and Irma were reunited with Ursula. They lived in Brussels for the next three years until immigrating to the United States in December 1947.