Children dressed as mice perform a play about Mickey Mouse in the Novaky labor camp. 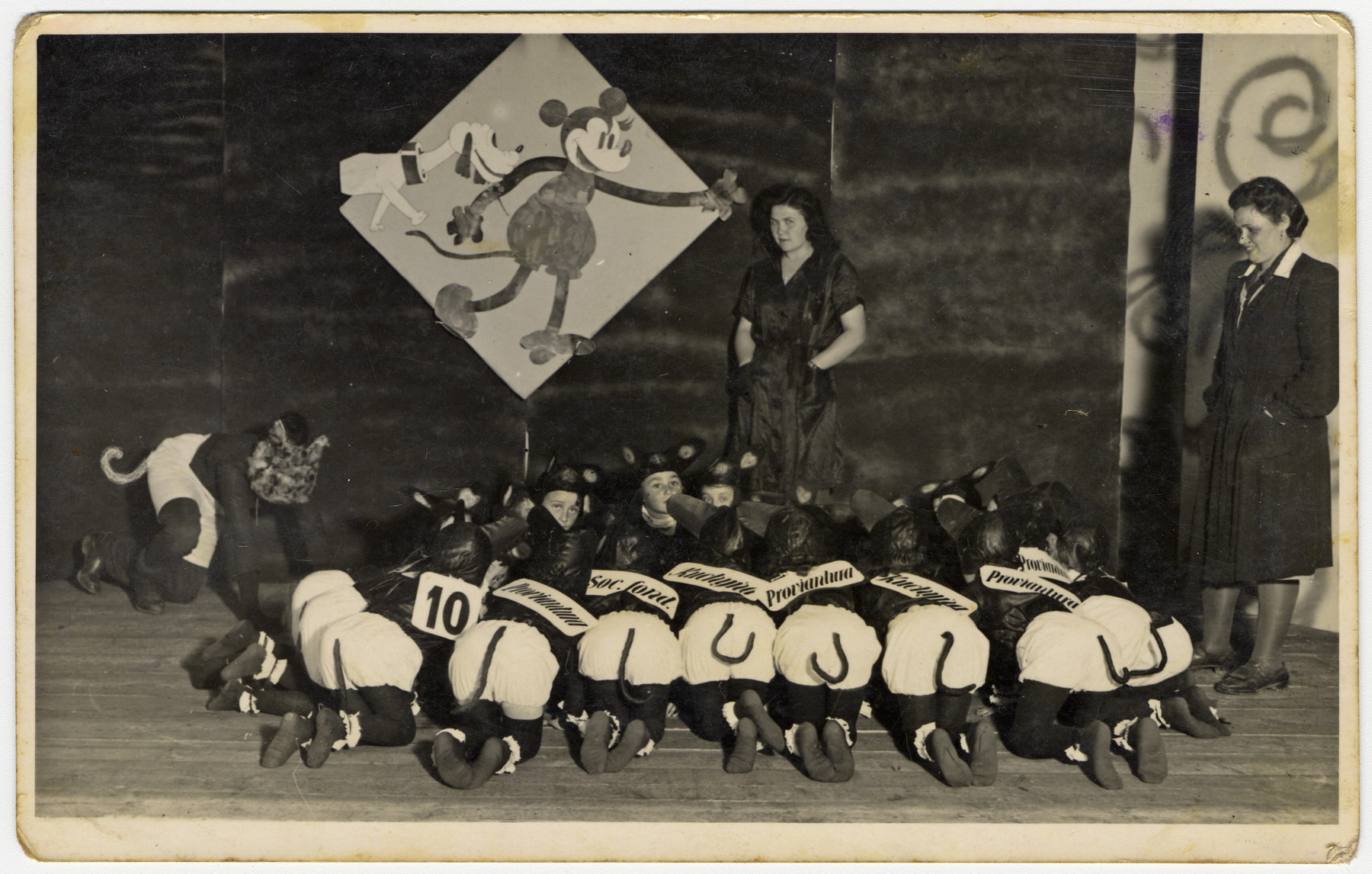 Children dressed as mice perform a play about Mickey Mouse in the Novaky labor camp.

Among those pictured is Mira Menzer (second row, far right).

https://www.ushmm.org/wlc/en/article.php?ModuleId=10007324.
Biography
Herta Menzer (now Iris Avni) was born on December 11, 1928 and her younger sister, Mirka (now Mira Frenkel) was born on January 5, 1938. The two girls and their oldest brother, Yehuda Alfred Miron Menzer (born on April 3, 1927) lived in Bratislava together with their parents, Aurelia Zlata Lamm Menzer and Eduard Menzer, a wealthy wine importer and exporter. In March 1939 Slovakia aligned itself with Nazi Germany, under Jozef Tiso. The Menzer family sold its house in Bratislava and moved in with their maternal aunt, Luisa Lamm Schlesinger, in Nitra, 50 miles to the east. In April 1942 the Menzer family was supposed to be deported to Auschwitz, but at the last moment they were released before boarding the train. In 1943 Iris tried to escape from Nitra to Hungary, but she was caught and imprisoned for six weeks. From the jail she was transferred directly to the Novaky forced labor and concentration camp, where she reunited with her parents and her younger sister. They were imprisoned in the Novaky camp until they were released with all the other prisoners as a result of the Slovak National Uprising in August 1944. The Menzer family stayed in Banska Bistrica and later tried to go into the Tatra Mountains. For a few weeks, they lived high up in the mountains, but then came down to the villages below at the urging of partisans. One day, some Germans entered the hut where the Menzer family was staying and saw Eduard wrapped in his Tallit reciting his morning prayers. The German soldiers tore the Tallit off him and threw it on the ground. Herta Menzer found the courage to address one of the Germans and insisted that she and her sister were not Jewish. She told them they were escaping from the Soviets. After the German soldier let them go, Herta ran to warn her mother, who was hiding behind the building. Once the Germans left, with Eduard Menzer, Aurelia recovered her husband's Teffilin and managed to find a hiding place in another village with her two daughters. On January 9, 1945 Eduard Menzer was executed in Kremnica together with 747 people, 400 of which were Jews. At the end of March 1945 the Soviet Army liberated the area. Alfred Menzer, who was deported to Auschwitz and transferred to many camps in Germany, was liberated from Bunzlau. After the liberation the Menzer family reunited in Nitra and eventually moved to Palestine.