Ivar Segalowitz and three other boys display models that they made in a woodworking class in the Ecouis children's home. 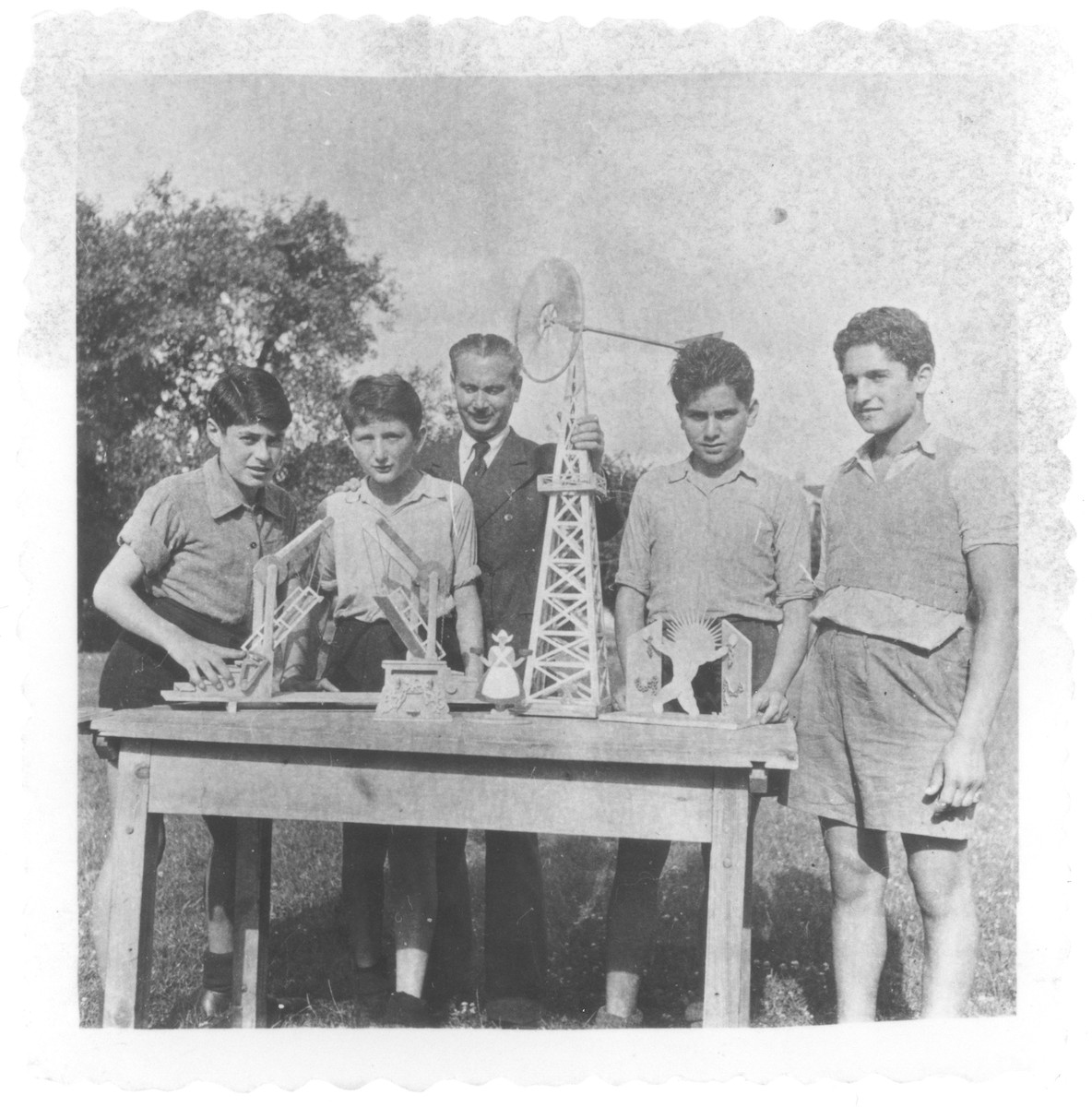 Ivar Segalowitz and three other boys display models that they made in a woodworking class in the Ecouis children's home.

Janusz Podlaski was born on March 4, 1929 in Lodz, Poland, the son of Jozef Podlaski, a successful textile manufacturer and importer, and Estera Leichter. He had one elder brother (Ryszard) and a younger sister (Irena). During the war, he was imprisoned in the Lodz Ghetto with his family, where his father Jozef, a member of the Jewish Council in the Ghetto, was the leader of a factory making leather goods, including horse saddles.
Janusz was deported along with his family to Auschwitz Birkenau, arriving there on August 21, 1944. His mother and sister perished in the gas chambers immediately on arrival. Janusz was assigned the number B-7654 and was made to work in the Buda Agricultural camp alongside many other boys who were transferred with him from the Lodz Ghetto around the same time.

Following the evacuation of Auschwitz and the two-day march westwards in January 1945, Janusz was transported to Buchenwald in an open iron ore wagon, arriving there on January 23, 1945. The SS registered him there as a Polish Jew with the inmate number 120127. Janusz worked in the camp's wood yard, which was an easier labor detachment where prisoners had to collect and stack fuel wood. Due to his young age Janusz was placed in block 66, located in the so-called "Little Camp." Members of the camp's resistance movement, led by Anton Kalina, had set up block 66 within the quarantine area of the camp as a sanctuary for the youngest inmates. There, they benefitted from slightly better living conditions and a certain distance from the SS, which saved many of them in the last months of the camp's existence.

In the war's final days in early April 1945, the Nazis decided to eradicate Buchenwald's Jews. The camp's commanders ordered all Jews to report for assembly, in order to force them out on more death marches. Kalina refused to comply with this order. He commanded the boys not to report to the assembly and changed the religion on their badges from Jewish to Christian, so when the SS came looking for Jews, Kalina told them that block 66 had no more.

Thanks to Kalina's efforts, when the Allies liberated Buchenwald on April 11, 1945, over 900 Jewish boys survived. Many of these boys were eventually transferred to the Childrens home at Ecouis, near Paris, by representatives of the OSE (Oeuvre de Secours aux Enfants), Janusz among them. During his time at the Ecouis children's home Janusz learned that his brother and father had perished--his brother on the death march from Auschwitz, and his father from illness and malnutrition shortly after the war's end.

In the summer of 1945, distant relatives sponsored Janusz and he emigrated to Manchester, England to live with them. Janusz (known as Jan) went on to have a distinguished career as a lecturer in radio and TV electronics and maintained his interest in models until he died, aged 70 in March 1999. Janusz died leaving his wife of 49 years, Millicent, a son Peter, and daughters Elaine and Anne.