Refugee youth pose with milk bottles and bag lunches in a dining room at the Fort Ontario refugee shelter. 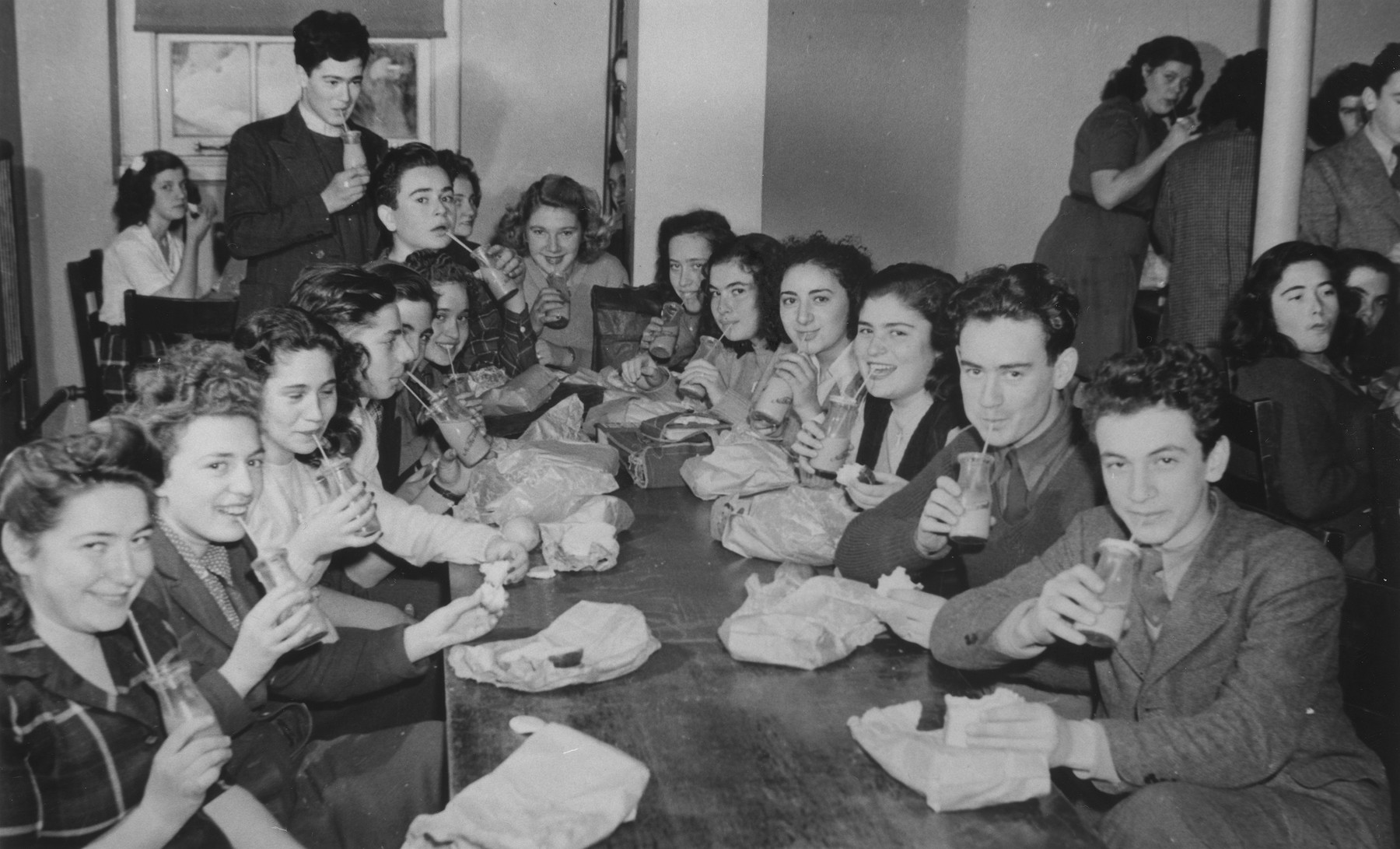 Refugee youth pose with milk bottles and bag lunches in a dining room at the Fort Ontario refugee shelter.

Event History
On June 12, 1944, President Roosevelt sent a message to Congress announcing that he was establishing an Emergency Refugee Shelter at Fort Ontario, a US Army camp in Oswego, NY. Relief and rescue organizations, as well as interested members of the public, had been suggesting bringing refugees under the threat of Nazi persecution to the United States for a number of months. At the beginning of March 1944, the War Refugee Board prepared a memo proposing the opening of safe havens (also called free ports) in the United States for refugees, where they would be admitted outside of American immigration quotas and repatriated to Europe at the end of the war. The project was presented to Roosevelt in May 1944. He was supportive of it, but feared his critics in Congress would attack the idea. So, the President asked the WRB to find an emergency situation which the removal of refugees would ameliorate. At the time, the WRB was receiving reports that refugee camps in Italy were almost full and the American military had issued a directive discouraging refugees fleeing to Italy from Yugoslavia. The WRB’s director, John Pehle, presented the situation to President Roosevelt, who issued instructions that the movement of refugees to Italy should not be discouraged, and used the situation to formally approve the establishment of a refugee shelter. In early June 1944, the camp of Fort Ontario was selected to house the refugees. WRB representative Leonard Ackermann traveled to Italy and interviewed interested refugees. In total, 982 refugees were selected for the Fort Ontario project. Seventy-five per cent of the group came from transit camps in southern Italy, including Bari, Ferramonti, Santa Maria di Bagni and Compagna, and twenty-five per cent from Rome, where most had been living in hiding until the recent withdrawal of the Germans. Approximately 165 of the refugees were children below the age of seventeen. In order to avoid complaints, officials recruited non-Jews as well as Jews. Still, Jewish refugees constituted 918 of the 982 members of the group, representing fourteen nationalities. The group was assembled in Aversa, Italy and set sail aboard the Henry Gibbins, a US Army transport vessel. The ship arrived in New York on August 5, and the refugees were taken to Fort Ontario near the town of Oswego in upstate New York. Their eighteen month sojourn at the shelter was a frustrating experience for the refugees. At first their freedom was severely restricted. They were not permitted to work or serve in the army. Their contact with the outside world was extremely limited. Requests to live with or visit relatives in the US were denied. Though rudimentary cultural, political and social organizations eventually came into being, they were plagued by divisiveness among their members. Following V-E Day, pressure from Jewish groups, relief agencies, Congressmen and members of Truman's cabinet, led to the Truman Directive of December 1945, which permitted the immigration to the United States of displaced persons in America's zones of occupation and removed restrictions on war refugees already in the US.
https://encyclopedia.ushmm.org/content/en/article/the-war-refugee-board.
Biography
David Hendell (born David Hendel) is the son of Hana Weissman Hendel and Eisig Hendel. He was born on September 11, 1928 in Zagreb, Croatia where his father was a textile merchant. He had one younger sister, Ruth born on April 26, 1935. After the German invasion of Yugoslavia, the family fled from Zagreb to the Italian occupied zone. Hana and Ruth left first, and after several unsuccessful attempts, David and his father joined them. They stayed in Iin Susak for a about a month and then went to Ljubljana, Slovenia for several months. David's grandmother Yetta Weissman, and Hana's sister, Bertha Kremer, together with her two boys, Vilko and Herman, joined them in Ljublijana. They fled Zagreb after the Ustashi killed Bertha's husband, Aron, and David's grandfather, Mordechai Weissman. From there they eventually came to Italy proper and lived in the town on Rovigo until the German invasion of Italy in September 1943. They then left for Rome and lived under false papers. David, together with his cousin Herman Kremer, studied in the Coleggio San Leone Magno, a Catholic Vatican school. In August 1944, following the American liberation of southern Italy, the Hendel family registered to join a refugee transport to the United States. After crossing the Atlantic on the naval vessel, the Henry Gibbins, David and his family were brought to the refugee camp, Fort Ontario in Oswego, New York. Bertha, Herman and Vilko also came to Oswego while Yetta stayed with her two other daughters, Hajka and Darika and eventually immigrated to Brazil. The Hendels lived in Oswego for the next year and a half and after they were granted permission to remain permanently in the United States in 1946, David and his family moved to New York City. David served two years in the military and then attended Columbia University School of Dental and Oral Surgery, graduating in 1959.